"The GLA is more refined, better to drive and feels more luxurious than ever." 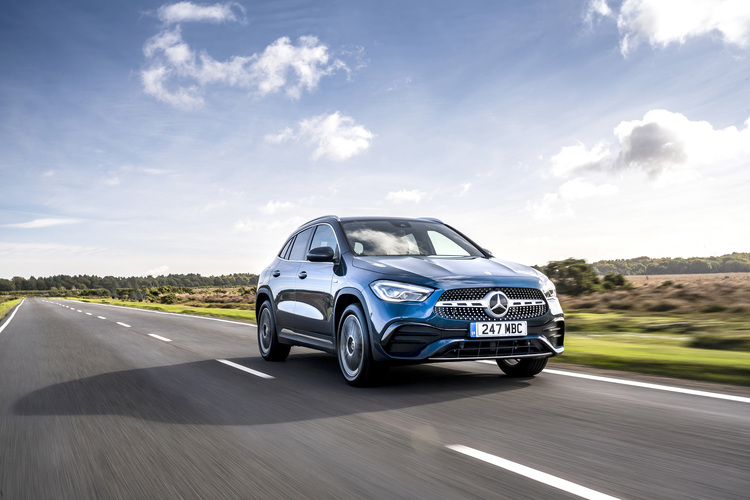 Since the all-new Mercedes-Benz A-Class launched a couple of years ago, there has been a flurry of new models that share its platform, including the CLA coupé and B Class MPV. That left just the GLA standing on the old A-Class platform and, given the popularity of small SUVs, this new model brings a welcome refresh.

Mercedes hasn’t just replaced the GLA with a new model though. It has introduced two small SUVs, with the GLB offering a more boxy conventional off-roader look while the GLA takes on a curvier and more city-friendly demeanour.

The new GLA is slightly shorter than before, but wider and taller. It looks more closely related to the B-Class in the flesh and feels similar to drive.

Like the rest of the cars in its immediate bloodline, the GLA is offered with three petrol and two diesel engines, plus a plug-in hybrid. There is even a pair of AMG versions, demonstrating the dynamic capability of the car’s chassis.

Company car drivers are likely to look at the entry-level GLA 180 or the 200 d, which both attract similar benefit-in-kind (BIK) of £175 per month. However, the 250 e plug-in hybrid provides a significant power boost, with 218PS on tap, and also cuts monthly tax bills to less than £75.

With a sizeable 15.6kWh battery, the GLA’s electric range is slated at 37 miles. Unlike bigger, heavier models that struggle when running on electric, the GLA’s maximum range is much easier to achieve.

We didn’t manage the claimed 201mpg, however. But a combined average of more than 60mpg gives us confidence that it’s an efficient choice if charged regularly.

The diesel models should also be able to crack 50mpg and may suit the highest mileage users best. The GLA 220 d is especially potent with 190PS and comes with all-wheel drive.

Equally, the 180 and 200 petrol variants, which both use the same 1.3-litre turbo engine, deserve credit for their combination of lively response and economy. They’ll achieve closer to 40mpg.

The GLA’s steering is light but direct, which, at times, makes the car feel a little unsettled. There’s not much body roll, however, and the car handles well although falls short of the BMW X1 for outright driver engagement.

The interior is lifted wholesale from the A-Class and is impressive. Two floating screens take care of infotainment and instruments, while neatly detailed air vents and climate controls give an uncluttered and modern appearance.

It’s spacious too, with adequate room for four adults. At the rear, the boot isn’t the biggest in class but still provides 495 litres of space. Plug-in models lose 50 litres, however.

So the GLA is more refined, better to drive and feels more luxurious than ever. It also has a great range of powertrains, with something to suit all needs. When it comes to pricing, though, the car is a tad on the costly side.

Prices start at £31,000 and quickly get into C-Class territory once you opt for higher-specified trim levels. The 250 e, while cheap from a tax perspective, costs almost £40,000 without options.