NISSAN GB managing director Gary Frigo has been promised an all-expenses-paid night out in Newcastle, party capital of the North, by his colleagues at the Sunderland factory if the Qashqai hits its ambitious sales target. Lucky him.

In order for Frigo to end up grooving with the Geordies, Nissan is going to have to persuade more than 20,000 drivers that they want to have its Qashqai rather than the standard fare hatchbacks and saloons currently on the market.

And that means creating a swell of Nissan customers out of nowhere, to the point that 80% of Qashqai buyers will be coming from other marques. Nissan hasn’t got much of a hold on this part of the market after the disappointments of the Almera and Primera.

It calls its Qashqai a crossover, claiming it fits no traditional sector. Instead, with its SUV looks and interior space, and lower-medium sector size, price and driving characteristics Nissan reckons it is an incredibly clever car – a reaction to what customers really want, rather than merely fitting a traditional template.

Whether the Qashqai is as clever and innovative as Nisaan thinks is open to question. It could be argued it is actually not very bright at all.

After all, Nissan has merely designed an SUV-ish body over the chassis of a hatchback (which will see service in the next Megane from sister company Renault). It could even be just a big hatchback.

Surely, it could be argued, instead of being the most innovative car in the sector, it is just a pastiche of all the bits of other cars most buyers like?

What can’t be argued is that it looks the part. Chunky and solid in appearance, there are the usual SUV lines, although the sleek side windows ensure the Qashqai doesn’t appear to totter on its tyres like some SUVs.

Its size confused me a bit. It looks Honda CR-V big but I was surprised to find that while it is 10cm longer and 12cm higher than a Volkswagen Golf – Nissan’s target car – and the same width, it is considerably smaller than the Honda. So job done there then. 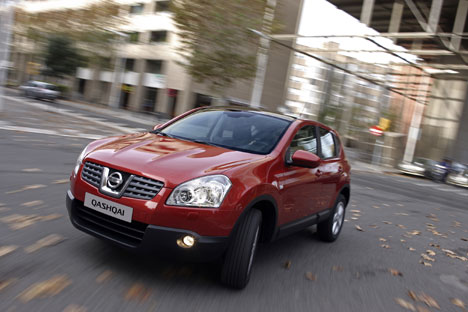 The Qashqai isn’t an SUV, but it does have the option of part-time four-wheel drive. This will be an option on the two biggest of the four engines available.

There are 1.6 and 2.0-litre petrol units and 1.5 and 2.0-litre diesels, the latter going on sale in June. For fleets, Nissan is hoping that missing out on this engine from launch will not be too much of problem (it has been delayed due to the development of the latest particulate filter) but it is key if it is to challenge the TDCis, TDIs, HDIs and CDTis which are so prevelant in fleet.

Of the 20,000-plus cars Nissan wants to sell annually in the UK, nearly half should find their way into fleets. Bearing in mind that Nissan’s biggest fleet seller in 2006 was the Micra, at around 13,000 units, and the next best was the X-trail at 3,600, it’s clear it has got some work on its hands, especially when the competition is essential fleet fare from very skilled operators.

Prices and residual values will be hugely important in giving it a fighting chance. The entry-level 1.6 comes in at £13,499 with a top-spec four-wheel drive model costing more than £23,000.

But at the heart of the range, the entry-level 2.0 dCi starts at a smidgeon over £16,000, and this is where fleets should get very interested. It is a lot of car for that sort of money.

Residual values are the other part of the equation, especially as Nissan is targeting the Golf, which means doing a lot of leasing business. According to CAP, most models will be worth around 30-31% of their value in three years’/60,000 miles’ time, which is better than the likes of Focus and Astra, but a good 10 percentage points off SUVs and the Golf.

Nissan might well be thinking that’s a disappointing result, but it has a poor recent record at this price point in the upper and lower- medium segments, and the industry is being reserved with its predictions.

MOST of the interior of the Qashqai is a noticeable step-up in quality for Nissan, especially the soft-touch centre console and the very sturdy switchgear, but it’s a bit ropey in others: the wobbly instrument binnacle and hard door plastics being the main culprits.

There is more than the usual amount of cabin space for a lower-medium sector car, which you would expect with its larger dimensions, especially in the back. Boot space is decent, if not cavernous. 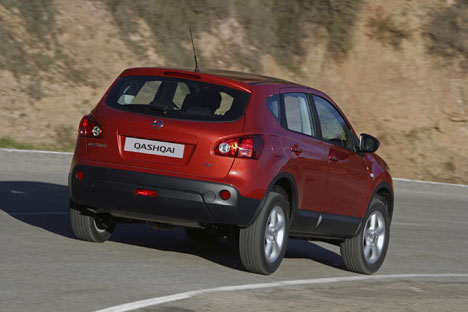 As for the way it drives? Well, it’s pleasantly surprising. I was expecting plenty of wobble, pitch and roll but the Qashqai drives like a solid, if rather unspectacular, hatchback.

The steering, brakes and gearchange are fine, but nothing to get excited about, although I suspect the type of person who might choose one of these cars is not looking for a car to screech around bends.

Looking at the marketing for the car, they get their thrills doing stuff like wakeboarding, or urban surfing, or some such youthful enterprise. 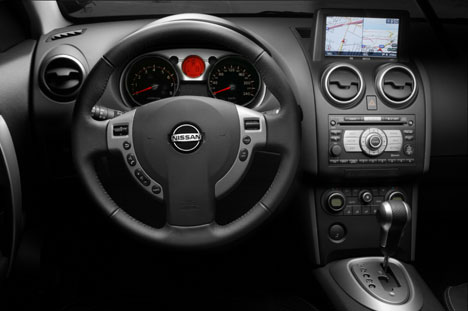 There were the two 2.0-litre engines on launch – petrol and diesel, and the diesel is the better option in terms of performance and economic return. Both are noisy under acceleration, and seem happier to be cruising.

If you still can’t get your head around what the Qashqai is, or isn’t, then get one in and simply look just what a lot of car you get for the money. After all the marketing guff about crossovers and innovation, it’s as simple as that. I think Mr Frigo might be needing his dancing shoes…