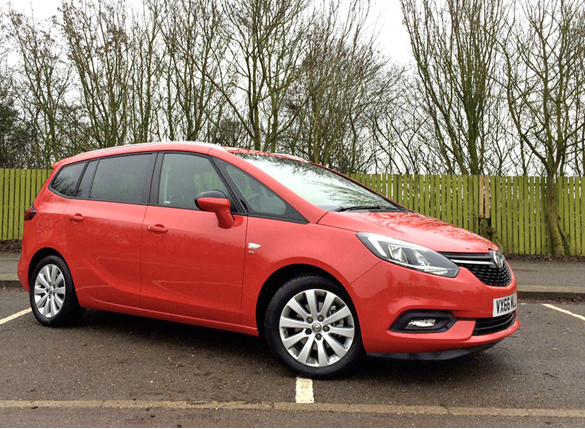 I have enjoyed the past 10,000 miles with the Zafira Tourer.

It’s not a car (or a sector for that matter) that is likely to get many drivers’ juices flowing but as a usable seven-seater it’s a sensible choice.

Last month I reported I was about to take a two-week journey to the south-west of France.

The entire trip of almost 2,000 miles was trouble-free and the car averaged 51mpg according to the trip computer.

The Wi-Fi kept the kids quiet but, given we needed to take everything but the kitchen sink, it became apparent the Zafira is seriously lacking in storage areas, cup holders, door and seat pockets and it has a very small glovebox.

This means, invariably, all passengers become surrounded by gadgets, toys and wires for electrical devices.

I also had to buy multiple 12v socket adapters due to the lack of power points.

After the journey nobody had any other comments so the Zafira must have done everything expected of it, just without any fanfare.

My colleague Andrew Ryan commented on the Zafira’s impressive turn of speed for a large car and enjoyed its fuel economy.

However he agreed the number of internal storage compartments is not up to scratch with other people carriers on sale.

I have only experienced one minor problem in the past six months.

While driving home one evening parts of the dash binnacle stopped working without warning including the speedo (both analogue and digital) and also the temperature gauge and fuel consumption computer went black.

A quick restart and everything restored with no further issues.

I’m preparing to take the Zafra Tourer on a 1,200 mile round trip to the south-west of France.

The Vauxhall should be the ideal partner for the trip due to respectable fuel efficiency, cargo carry capacity (boot space of 710-litres with the third row folded flat) and excellent levels of comfort for rear passengers thanks to sliding rear seats including adjustable backrests.

I’ll also need to get the in-car WiFi reactivated for the journey (data packages can be bought online) to keep my passengers entertained. It will be a perfect intensive test for the people carrier.

Speaking of tests, I have inadvertently tested the OnStar SOS facility (or rather my four-year-old son has). The SOS button is a 24- hour emergency call service which, once pressed, gives you a direct line to an Vauxhall OnStar service advisor.

If a medical emergency affects you or your passengers the advisor is able to send details of your location to the relevant emergency services.

Fortunately there was no medical emergency so I cancelled the call but the OnStar advisor called straight back to check all was okay.

Embarrassing, but at least I know the system works should it be needed in the future.

This service is free for 12 months then requires a subscription. Fleet manager can now control whether drivers can buy OnStar packages through the fleet manager portal which Vauxhall has recently updated.

Fleet managers can also opt in or out of OnStar vehicle diagnostics, dealer maintenance notifications and roadside assistance services, and can control the vehicles Wi-Fi facilities.

After borrowing features editor Andrew Ryan’s long-term Ford S-Max for a week I found myself missing the driveability of the Zafira Tourer.

Despite the figures I expected the slightly heavier, but more powerful, S-Max to outperform the Zafira but I didn’t find this to be the case.

The two cars are quite different on the road and while the S-Max 2.0 diesel engine has more power and torque it lacks power under acceleration and the gear change is long and notchy. The brakes are also lacking bite and need more of a shove than expected.

It’s far less fuel efficient than the Vauxhall, too, and failed to get above 39mpg.

In comparison the Zafira Tourer feels lively on the road and is almost two seconds quicker to 62mph than the S-Max despite the smaller engine. The brakes are strong and responsive, the gearchange is short and positive and the fuel economy has reached as high as 59mpg on a long run which is only just below the manufacturer’s claim of 62.8mpg and significantly higher than the Equa Index real-world figure of 47.3mpg.

The S-Max has the edge over the Vauxhall in the ‘quality feel’ stakes but it’s worth pointing out that our long-term Zafira model is more than £4,000 cheaper than our S-Max which could go some way to adding some premium touches such as metalic paint (£555), leather seats (1,060) or panoramic windscreen and sunroof (£1,015).

I’ve also had a tyre replaced on the Zafira this month. A slow puncture caused by a small hole in the rear passenger side tyre sidewall meant a like-for-like replacement was needed.

The Zafira Tourer has just had its first top up of AdBlue (5,000 miles). It had indicated 1,600 miles left before the tank was empty.

The filler cap is under the fuel flap next to the fuel filler which is very convenient. However filling the AdBlue tank was not straightforward.

The motorway services only sold 10-litre containers at £19.99 (£22.80 for five litres at our local Vauxhall dealership). It was cumbersome to carry back to the car and tricky to hold up to the filler. The container came with its own spout but it would only pour when it was squeezed.

Also with no indicator to tell you when the tank is full, the AdBlue spills out down the side and onto your shoes. I’m now left with a half-full container as the Zafira didn’t need it all, although a colleague will use it for their long-termer.

Interior space has to be a priority when buying a seven-seater. It’s unlikely a driver would choose a people carrier for anything other than practical reasons so leg room and load space are key.

In the Zafira Tourer each of the second row seats slides back and forth independently, enabling rear legroom and bootspace adjustment.

The two extra seats that pop up from the boot floor are a bit cramped, so they’re best used for children, smaller adults or short journeys. Access to the rearmost seats is gained by simply tilting the second row outer seats forward.

The Zafira Tourer has a ‘seats flat’ load space of 1,860 litres which is in line with rivals (Volkswagen Touran: 1,857 and Citroën C4 Picasso: 1,851). Stowing the rear load cover is fiddly as it slides into a recess under the boot floor. But at least there is somewhere to keep it which cannot be said for all people carriers.

Our long-term Zafira Tourer comes equipped with the Vauxhall Onstar system. Vauxhall calls it a personal on-board assistant, but what exactly does it do?

First, and most important, is the automatic crash response function which, in the event of your airbag being deployed automatically connects you to an Onstar advisor.

The system also sends a report to the advisor, including your location, travel direction, vehicle colour and the extent of the damage.

The emergency services will be sent to your location immediately if your vehicle report warrants it.

The car is also equipped with two buttons, a red SOS one which gives you a priority line to an Onstar advisor for emergency assistance and a blue ON button for non-emergency support such as destination download where the advisor can send your chosen destination directly to your navigation system.

Stolen vehicle assistance which can locate and immobilise the vehicle in the event of it being stolen.

Vehicle diagnostics – Onstar can send you a monthly email updating you on the condition of your car including oil life and tyre pressures. Or, if a warning light appears you can contact the Onstar team for advice on how severe them problem is and the best course of action to take.

You can also access Onstar via the smartphone app which has useful functions including fuel level check and also allows you to send navigation details direct to the car.

Launched across the UK in October last year the new Zafira Tourer gives a much needed facelift to the outgoing model.

* A new, more modern front end which does away with the boomerang lights in favour of a more conventional and cleaner look with new upper and lower grilles, which give the Tourer and New Astra a familial look.

* A redesigned instrument panel with integrated touch screen, which previously sat on top of the centre console. This allows for many buttons to be eliminated from the previously cluttered dashboard.

* And improved in-car connectivity with the Vauxhall IntelliLink infotainment system featuring Apple CarPlay and Android Auto compatibility (not available on our test model) and OnStar, including Wi-Fi hotspot able to connect up to seven devices.

The new Zafira Tourer retains the Flex7 seating system which allows for various configurations of the seven seats and the engine line-up also remains unchanged and consists of the 1.4i (140PS) Turbo and the 2.0CDTi (170PS) in either manual or automatic transmission, and a 1.6 CDTi (134PS) Ecoflex in manual only.

The exterior revisions put the new Zafira Tourer up with the best people carriers in the style department and the new dashboard is both stylish and practical. The 1598cc diesel engine offers enough power for an enjoyable drive while returning acceptable fuel economy (an average of 49mpg) while I would expect those drivers covering mainly motorway miles to see a noticeable increase in fuel efficiency.