"Interior quality is high and the controls layout is impressive when compared with other cars in the segment." 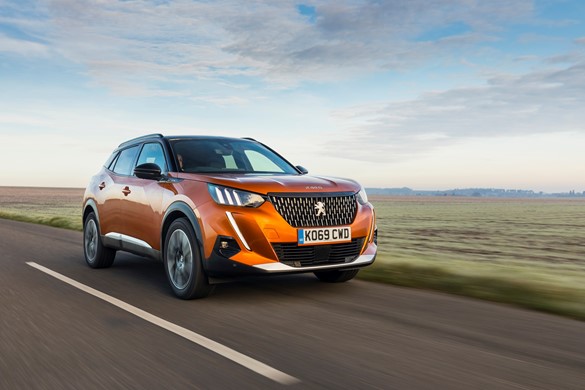 The Peugeot 2008 enters its second generation with a sharp new look that scales down the best bits of the 3008 and 508, much like the smaller 208 on which it is based.

There is a suite of new driver tech, an evolution of the maker’s modern i-Cockpit and more space than before. It is also available in all-electric e-2008 form, underlining the company’s strategy of offering all its models with a choice of petrol, diesel or electric power.

Key competition comes from the new Nissan Juke and Renault Captur, as well as the Volkswagen T-Cross. Despite being more compact than a Volkswagen T-Roc, the 2008 offers impressive interior space and the price to match pricier VW models.

While the old 2008 didn’t exactly set the world alight, the larger 3008 and 5008 have done very well at revitalising the brand’s appeal and the manufacturer hopes buyers will find the new 2008 just as appealing.

Interior quality is high and the controls layout is impressive when compared with other cars in the segment. Using Peugeot’s i-Cockpit concept, the 2008 has a smaller steering wheel than most cars, designed to sit above or beneath the instrument cluster, meaning drivers will have to adjust their position to suit. It won’t be to all tastes, but Peugeot believes the setup enhances the driving experience.

The 2008’s petrol engine line-up consists of one 1.2-litre PureTech unit in various power outputs. The entry-level PureTech 100 returns around 50.4mpg. Move up the range to the PureTech 130 and you can expect 47.8 (manual) or 45.5mpg (automatic), while the most powerful PureTech 155 returns up to 45mpg.

Diesel models are better suited to higher mileage users with fuel economy of 62.7mpg for the BlueHDi 100. CO2 emissions are also lower at 96-102g/km, while the petrols range between 103 and 121g/km.

Most customers are expected to favour the PureTech 130. It provides ample performance from such a little engine, getting from 0-62mph in 8.9 seconds. It pulls strongly but the manual gearbox can be quite jerky, as we’ve found in other PSA cars with this engine. The gearlever itself is a bit bulky and awkward, and the throw a bit long and indistinct.

The solution to this problem is to opt for the EAT8 automatic transmission. It can make the car feel a little eager to duck and dive when accelerating and braking, but the gear changes are fast and smooth and suit the engine well.

The more powerful 155PS unit is only available with the EAT8. There is only a 4g/km emissions penalty for the more potent unit, which is likely to appeal to user-choosers.

The 2008 is one of the more satisfying compact SUVs to drive, with an agile chassis that allows you to have a little fun if you want to. Most of the time it feels easy to drive and to manoeuvre. There isn’t a large degree of bodyroll in corners and the seats are supportive, making it feel civilised.

The suspension can feel a little troubled by a series of bumps in the road that produces a slight skittish feel, but most of the time it’s composed and well-rounded. It feels most like the Škoda Kamiq, blending comfort and control nicely without compromising too much in each area.

Those opting for the e-2008 should enjoy an equally rounded driving experience. A 300kg weight penalty means the 136PS motor doesn’t deliver as much of a shove as you might expect from an EV, but for moderate driving, the electric model is a great package.

The boot, which comes in at 434 litres, is larger than its immediate rivals – and should be sufficient for family duties without too much trouble. The e-2008 has the same boot volume, although it loses the storage space beneath the boot floor.

Four trim levels are available. Entry-level Active versions are fairly sparse in terms of equipment but you do get rear parking sensors and LED headlights.

GT Line versions are expected to have the best residuals, and therefore be most attractive to lease. They get heated seats, sat-nav, sportier styling and partial leather trim.

The e-2008 is available in all four trim levels.