"It looks purposeful, sporty and has more road presence than other Renault models" 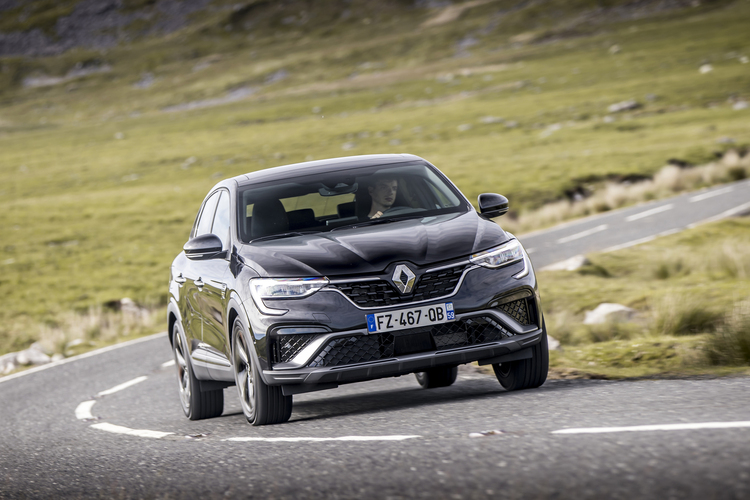 Premium carmakers have been setting a trend for SUVs with sleeker coupé-like roofs for more than a decade. It all started with the questionable-at-the-time BMW X6 and, more recently, there’s been a slew of new models, including the Audi Q5 Sportback and Volvo’s upcoming C40, to choose from.

Renault, therefore, cannot be blamed for jumping on this rather lucrative bandwagon, as it seems that, despite lacking practicality, many people are quite happy to pay a bit more for a bit less.

In the case of the Arkana, it’s not quite as straightforward as lopping a bit off the back of a Kadjar. For starters, the Arkana is based on the platform that underpins the Clio and Captur – albeit extended to give the newcomer a slightly longer wheelbase than its closest sibling.

At first glance, the car makes a positive impression. It looks purposeful, sporty and has more road presence than other Renault models. There’s a premium feel to the interior too, which borrows much of its design and switchgear from the Clio and Captur, but packaged in a more spacious cabin. All, with the exception of the base trim, get a 9.3-inch central touchscreen and a digital instrument cluster.

Prices start at £25,025, but the range-topping RS Line (from £29,625) is expected be the most popular. It comes with larger wheels, leather and suede upholstery and heated seats.

Two powertrain choices are offered, both with a degree of electrification. The TCe Mild Hybrid uses a 1.3-litre turbocharged petrol engine with a small motor/generator. It develops 140PS and emits from 131g/km of CO2. The E-Tech hybrid makes use of a 1.6-litre petrol engine and a pair of electric motors. This time you get 145PS and CO2 emissions from 111g/km. Renault expects the E-Tech will account for two-thirds of Arkana sales.

It’s here where things start to sour. Unfortunately for Renault, neither powertrain lives up to the way the Arkana looks or feels. The lesser-powered and cheaper TCe Mild Hybrid is the more potent of the two, taking 9.8 seconds to reach 60mph from rest. While this isn’t particularly poor, and outright acceleration isn’t necessarily the most important aspect of a fleet car, it’s the way the engine delivers its power that disappoints. You have to work it quite hard, but it’s not particularly keen to rev – despite having a seven-speed dual-clutch gearbox – and makes a bit of a racket when you do.

In the E-Tech, there’s a nice surge of power from the electric motor from the get-go, which makes driving around town quite pleasant. At around 30mph, the 1.6-litre petrol engine kicks in to assist. The switchover is relatively seamless and, in most urban settings, the powertrain does a decent job without burning much fuel. It’s when you get on the motorway that
the engine struggles. The automatic transmission is slow to react when you want to accelerate rapidly and there can be a noticeable pause between shifts – daunting when joining a busy motorway.

The E-Tech makes much more sense from an efficiency perspective, however, achieving more than 50mpg during our test. It recharges its battery rapidly when braking or coasting, so there’s always power on tap to boost acceleration or to allow for zero-emission driving at low speeds. It also only costs an extra £1,000 when compared with the mild hybrid model.

The Arkana is a good-looking and practical crossover that offers a more niche bodystyle than models from other mainstream brands. While its powertrains are little underwhelming, the E-Tech Hybrid is efficient and affordable.