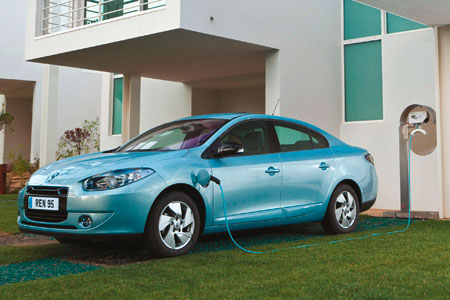 The Nissan Leaf is soon to get a very serious rival in the shape of the Renault Fluence Z.E. (Zero Emissions). Despite the fact that Renault and Nissan are joined at the hip, they’re doing things rather differently.

While Nissan developed its electric car from the ground up, Renault modified the Fluence saloon it sells in some European markets (based on the Korean Samsung SM3 – the French manufacturer has a long-standing partnership with Samsung).

Along with that, the buyer of the Fluence never owns the battery, instead leasing it from Renault.

That helps keep the outright purchase price down and comes with several other benefits, including a comprehensive assistance and recovery service. Renault (and Glass’s) suggests this helps remove any uncertainty over the reliability or longevity of the battery for second owners of the vehicle and will help build confidence in the technology on the used market.

Going on sale in mid-2012, the Renault Fluence Z.E. takes the form of a moderately spacious four-door saloon. It’s noticeably well equipped, featuring satnav, Bluetooth, climate control and auto lights and wipers, together with a raft of
safety systems.

The cabin is more than a little reminiscent of the Renault Mégane’s though of course it’s eerily quiet most of the time due to the lack of any engine noise.

Driving the Fluence is simplicity itself, but this electric car also excels at being comfortable. It’ll take drivers a while to adjust to the aggressive regenerative braking and lack of noise, but overall it is an accomplished performer.

As with all electric cars, there is no CO2 emitted from the Fluence Z.E. so it is exempt from any tax. Obviously the production of electricity may cause such emissions, but that’s not easily measured – and it applies to the extraction of oil too.

Day-to-day running costs will be modest. It’ll be different for every driver and dependant on their price of electricity, but Renault quotes an average cost of about 2.6p per mile for electricity alone. That’s based on 115 miles from a full charge costing £3.

The most fuel-efficient internal combustion engines cost significantly more than twice that to fuel.

Although owners of the Fluence Z.E. have to lease the battery, other costs should be modest. An electric motor is far simpler than a conventional engine with less moving parts so there’s virtually no regular maintenance. Hence Renault offers adaptive ‘planned servicing’ intervals. Specific insurance is offered too.

Like all current electric cars the limited range would be a deal-breaker for many drivers, but for those that do not drive long distances and have easy access to charge points the Fluence could be an intelligent purchase.