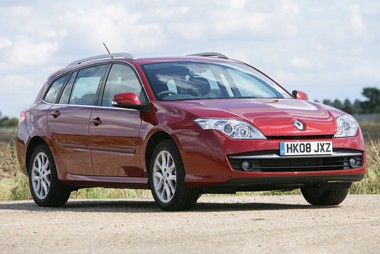 This Renault Laguna Sport Tourer has taught me to be a better driver. During my first few journeys I would look incredulously at the gearshift prompt on the dashboard.

An arrow-shaped readout tells you when to change up or down a gear to get maximum fuel economy and the up arrow appeared long before I was inclined to change gear.

But I stuck with it, and adapted my gear changes to the arrows. I’m driving much more slowly, more smoothly and probably saving gallons of fuel into the bargain.

This taming effect on my driving style has the added benefit of helping me live with a diminutive 1.5-litre turbodiesel engine hauling an upper-medium estate car.

Before the gearshift indicator started curbing my hedonistic driving style, I would have flogged the little motor (it’s referred to as the dCi 110, rather than 1.5, as Renault feared this would put drivers off) to death trying to make what I used to think of as good progress.

Now I pootle along very sedately, leaving enough performance in reserve to make the car feel positively sprightly when I really do put my foot down.

Of course, it’s just an illusion. The Laguna 1.5 dCi 110 engine qualifies this Sport Tourer for Renault’s eco² label – it’s built for economy rather than speed.

It comes up with some impressive figures as a result. At 133g/km of CO2, this Laguna qualifies for an 18% benefit-in-kind tax banding. This means that a base rate taxpayer will have to find £54 a month in company car tax – impressively low for the amount of car you get.

According to the on-board computer, I’m not getting anywhere near the 53.1mpg fuel consumption Renault claims for the combined cycle.

That’s what I see on a dual carriageway at between 60 and 70mph, but as soon as I hit town traffic the average drops to 41mpg and stays there until I reset the readout.

None of this means the Laguna is a disappointment. Far from it. It’s a good-looking, well-equipped, load-swallowing, smooth, reliable car, which has performed faultlessly for more than 6,000 miles.

The filthy weather has seen me under the bonnet twice to replenish the screenwash and that’s it.

If I had a criticism, it would be back to the gearshift. It doesn’t have the precise, well-engineered feel that I got used to in our Mazda6 long-term test car.

I haven’t worked out how to put postcodes into the satellite-navigation system (a combined £2,250 optional extra) and I have a sneaking suspicion you can’t.

But to ascertain that, I’d have to read the manual. And the navigation display seems to play by its own rules when deciding whether to give me a day or night view.

So far, it’s been a positive introduction to life in Renault’s new flagship model.

At a base price of just over £18,000 it ticks the value for money box, although our test car has had some bells and whistles added which take the price up to £21,684.

All in, that’s £2,250, and we’ve also opted for metallic paint and the S pack for its larger alloys and better seats. Worthwhile? We’ll find out over the coming months.

The engine meets Renault’s eco² criteria, with CO2 emissions of 133g/km and an impressive 56.5mpg average without compromising on performance.

Cost of ownership is assured with low insurance groups and service intervals of up to 18,000 miles. It has the lowest tax in its class and a BIK band of 18%, giving a monthly cost to a 20% tax payer of just £54.

This, combined with employer’s National Insurance over three years of £1,243 and VED of £120 per year, ensures that this Laguna Sport Tourer is a wise choice for fleets.