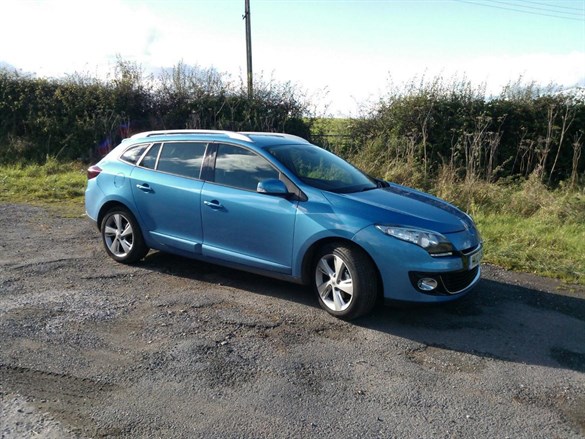 Spectacular improvements in manufacturing standards are starting to blur the differences in perceived quality between cars from volume manufacturers and the premium brands.

The interiors of the latest Golf and ceed models reveal how Volkswagen and Kia are raising the bar to challenge class-above cars as well becoming even more competitive in their area of the market.

An emphasis on detailing is to set improve the image of Renault products and after relatively minor front end changes involving LED daytime running lights, gloss black grille inserts and chrome fog lamp housings, the Dynamique version of the Megane has taken a turn for the better in appearance.

But while features like keyless entry, push button start, anti-pinch power windows and cruise control contribute to a generous package of equipment fitted as standard, two options are proving to be invaluable aids to driving comfort in our test car.

The first involves rear parking sensors and a camera that shows the immediate surroundings on the sat-nav screen. It’s a boon in helping plot your reversing line with a full load and well worth £350 – only £40 more than for parking sensors alone – compared with the cost of repairing dents.

Even more useful is Visio, an electronic system to provide lane departure warning and automatic switching from main to dipped lights for £250. I’ve never liked the former and initially regarded auto-switching as unnecessary, but now I’m a big fan.

Instead of continually flicking the lever, this set-and-forget gadget allows the driver to keep hands on the wheel while it scans the road ahead from a windscreen camera and switches to main beam at speeds over 28mph. But it refuses to operate under street lighting or when vehicles are approaching.

Research has shown that with the Visio system, main beam can be in use up to five times longer even on our busy roads without dazzling oncoming traffic.

Optimum vision is crucial to safe progress, and as the headlamps on the Megane provide a 100-metre spread of high-beam illumination compared with just 30 metres on dipped beam, this is clearly a significant gadget for the working driver – particularly at this time of year and at the end of a long day at the wheel.