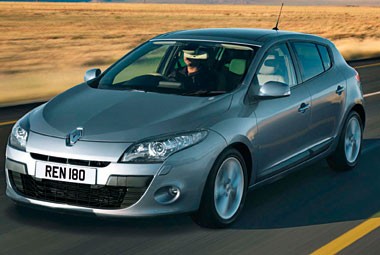 Renault is being true to its word in terms of the promises it made surrounding the quality of its future cars.

The new Megane’s interior is a vast improvement over its predecessor, with a sturdy feel to all the interior plastics and not a squeak or rattle.

In overall fit and feel terms, it is right up at the top of the segement for quality.

The styling may not be to everyone’s taste, but it is neat and effective and doesn’t cause offence in the way the old version did to some people.

Inside the quality is evident, and there are some nice touches such as the central instrument dial which is now a white-backed digital display, while the slivers of silver material on our Dynamique test car lifted the mood of the predominantly black cabin.

Only a lack of rear legroom spoils things – with a 5ft 8in driver there is precious little room behind for an adult.

It performs well on the road, too, with the punchy 1.5-litre turbodiesel engine allied to a slick six-speed manual gearbox.

This unit certainly belies its diminutive nametag with the performance it delivers.

Only a rattly noise at start-up spoils things here, but this soon reduces once the car is warmed up.

Ride comfort is very good, with bumps soaked up effortlessly, and the new Megane also handles very well with a very flat cornering stance and direct steering – it certainly feels as sprightly and light on its feet as a Ford Focus.

Ford’s recent price rises have pushed the Focus above the £17,000 mark for what is a near-entry-level model powered by a 90bhp engine.

The Renault and Nissan share the same 106bhp diesel engine, while the Golf is the most powerful with 110bhp from its 2.0-litre TDI engine.

The Renault is the cheapest in terms of benefit-in-kind tax, costing a base rate taxpayer £27 a month.

The Golf and Qashqai will both cost £50 a month as they are a BIK band higher.

With the narrowest service intervals (12,500 miles) and largest wheels (17-inch alloys) the Nissan will cost the most in SMR costs.

The rest have 16-inch wheels, so tyre costs will be similar, while the Golf’s variable service intervals will cost less than the Megane’s fixed 18,000-mile gaps and the Focus on 12,500 miles.

The Focus is just pipped and returns a claimed 62.7mpg.

With the lowest SMR costs and a massive advantage in depreciation costs, the Volkswagen is way ahead of its rivals.

Over a typical fleet lifecycle it will cost £2,000 less to run than the Nissan in second place.

The Renault Megane is a convincing package – well equipped, economical and with a neat and well built interior.

It is also the cheapest car here at the front-end, and its driver benefit-in-kind tax bill is the lowest of the four.

It competes well with the Nissan and undercuts the Ford in this comparison on wholelife costs, but there is a sizeable gap to the Volkswagen in first place.

The new Volkswagen Golf costs £400 more to buy than the Renault but it's very strong RV prediction means it will cost much less for a fleet to run. It's higher BIK bill is the only blemish.