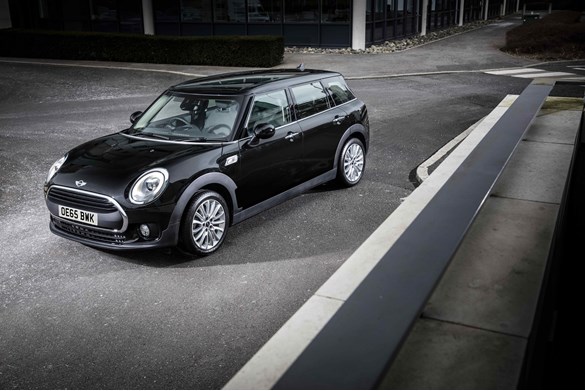 Last summer when I first saw the second-generation Mini Clubman, a few weeks ahead of its public debut at the Frankfurt motor show, there were Cooper D and Cooper S pre-production models.

I asked whether we would see an entry-level One variant at some stage soon after the launch, and was told it wouldn’t happen, as this Clubman would be moving upmarket.

This summer, perhaps inevitably, the Mini Clubman One D went on sale. It uses a 1.5-litre three-cylinder diesel engine producing 116hp, and, perhaps more importantly, allows the Clubman to fall below the 100g/km threshold – the only variant to do so.

For those unfamiliar with the latest Clubman, introduced late in 2015, it has grown in dimensions to give Mini a car to compete on size and price with the Audi A3, Mercedes-Benz A-Class and Volkswagen Golf. Probably the BMW 1 Series, too, but Mini would prefer sales were stolen from rivals rather than within its own company.

It allows Mini fans to choose something larger and more practical than the hatchback, as well as bring new customers to the brand, for whom the hatch is, or has become, too small.

The majority of people choosing a Mini add the Chili equipment pack, but even without it there is a decent level of kit in this entry-level version.

While the official combined fuel economy of this model is 74.3mpg, we didn’t come close to matching it in our drive. Although it wasn’t difficult to see the trip computer averaging in the low- to mid-60s when being driven gently.

It’s also easy to see rather lower than that because, despite having less power than any other version of the Clubman, the engine response still has the characteristic keenness of other variants.

The driver feels more connected to the car than perhaps any other vehicle of this size, which ensures its appeal among user choosers who enjoy their driving, as well as those who want something that stands out from the typical hatchback.

Those twin rear doors add to the character, and retain a link to the Austin Mini Countryman and Morris Mini Traveller of the British Leyland era (Clubman was not a specific estate car designation in those days), but there is inevitably a compromise in visibility.

However the emotional appeal of the car is so strong that I can’t imagine it becoming a deal breaker.