A PAIR of hollow eyes glare at me from the depths of the car park. It might be from the happy flat-packed furniture land of Sweden, but this facelifted Saab 9-5 has something of Transylvania about it.

New engines and an uprated chassis have been added to the package, but the exterior design from the A-pillars back is largely unchanged, bar the new light clusters and bumper at the back.

The result is a bit ungainly – the straight, almost boxy overall shape looks outdated and the new nose produces a weird overhang when viewed in profile. 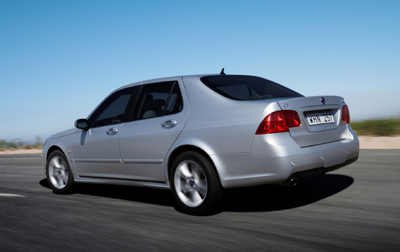 Whatever, this is subjective stuff and seeing a dark coloured estate with the facelift treatment the other day looked a lot better than our silver saloon.

Inside, the dash is still a big slab of aircraft-inspired design.

The plastics feel flimsy – certainly nowhere near the quality as those used on the smaller, newer 9-3 models, and not a patch on the level found in the cabin of an Audi.

But on the road the Saab doesn’t show its age at all. The 9-5 drives beautifully and the 1.9-litre common rail turbodiesel TiD 150bhp engine (as found in the 9-3 and various Vauxhalls) feels bigger than it is and produces great dollops of torque (235lb-ft at 2,000rpm) all the way through the rev range. And despite only having five gears, the ratios are spread well enough to give both decent acceleration and relaxed cruising at motorway speeds.

Although a large car, the handling of the 9-5 is nimble and precise.

The new chassis has revised suspension all round, giving a much sharper feel than the previous generation. It’s comfortably soft on the straights, but there’s enough firmness to allow spirited performance through twistier sections of road.

The steering is perfectly weighted – light enough around town but with enough feel to offer decent feedback when you press on.

Downsides? Well, I would prefer a bit more give to the brake pedal as it feels unusually firm with not much travel, but that’s about it.

So despite the model’s age, the revised 9-5 feels as sharp as its rivals in driving terms.The styling lacks cohesion and modernity, though, and inside the cabin is showing its age.

But if driving dynamics are high up on your drivers’ wish lists, the Saab delivers.