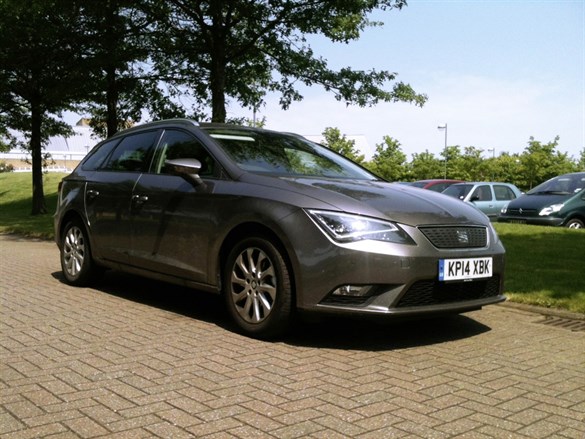 My experience with the Leon so far gives me the definite impression that Seat has upped its game. Simple, clear interior design means the cabin is a comfortable place to be, and is streets ahead of the previous generation Leon.

Though the Exeo, a reworked previous-generation A4, had a brief spell on the market and brought some success for Seat, this Leon – with three bodystyles – makes it far easier for a company to consider adding the brand to its choice lists.

In general, our Ecomotive estate is pretty kid-friendly. Integrated sun-blinds pull up out of the rear doors, clipping into fittings at the top of the window, while a full-width sun-blind can be put in place between the generous boot and the rear seats.

The one exception to the Leon’s practicality is the pale grey fabric used on the doors and seats which, while smart now, over time is not likely to hold up. In addition, the seats are quite flat, and don’t appear to offer much padding – although on long journeys, they’ve proved comfortable enough.

The majority of Leons currently include a free technology pack, which provides three additional options within the purchase price. The LED headlights offer a clean, white light, which makes driving at night a lot easier. Passing a Leon heading in the opposite direction also emphasises the visual impact the LEDs make – the sharp outline is striking and, against some of the brighter colours in the range, really stand out.

Inside the cabin, digital radio is a welcome addition. It is rapidly becoming the norm in vehicles – perfect timing as the range of stations has much improved.

Navigation is the final puzzle-piece of the pack. Based on the Volkswagen Group system, mapping is clear, easy to read and reasonably accurate. While buried away initially, full postcode lookup is possible, making address entry a lot easier than on some models I’ve driven.