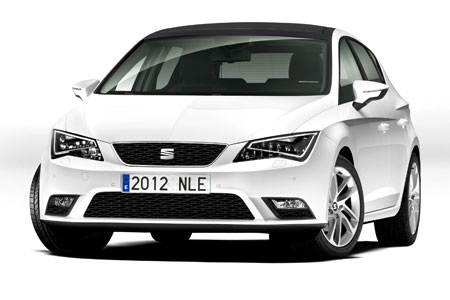 Like the Audi A3 and forthcoming Skoda Octavia, the Seat Leon shares much with the new Volkswagen Golf. All are based on VW’s new MQB modular base, which means the Leon has about 55% of its components in common with the Golf.

This is no bad thing and means the Leon has a 58mm longer wheelbase than the previous model for greater cabin space. It’s also 48mm wider and 4mm taller yet is 52mm shorter overall to make the Leon more compact for parking without compromising interior room. And it’s been on a diet, losing 90kg compared to the car it replaces.

Looks-wise, the new Leon takes its lead from the recently-facelifted Ibiza. However, the Leon’s rear door handles are now positioned on the door itself rather than hidden in the rear of the window frame.

The reason for this shift in design is two-fold. Firstly, Seat reckons some buyers dismissed the previous Leon as they believed the car was a three-door and not practical enough for them. Secondly, Seat will introduce a three-door Leon SC coupé in 2013 alongside a five-door ST estate version.

Adding to the Leon’s fleet focus are a range of engines that offer sub-120g/km CO2 emissions, with the exception of the 177bhp 1.8-litre petrol engine.

Of more interest are the turbodiesels, with a rapid 184bhp 2.0-litre TDI due in May 2013. The 150bhp 2.0-litre TDI with manual or DSG transmissions is on sale from March 2013 alongside the rest of the range. This engine offers 106g/km emissions and 68.9mpg, helped by all Leons coming with stop-start as standard.

Most fleets will opt for the 1.6-litre diesel with 105bhp, 99g/km CO2 emissions and 74.3mpg when ordered with the five-speed manual gearbox, Choose the 1.6 TDI with DSG ’box and emissions creep up to 102g/km and economy edges down to 72.4mpg, while performance remains the same at 0-62mph in 10.7 seconds.

An Ecomotive version of the 1.6 TDI will appear within 12 months of the new Leon going on sale and Seat UK managing director Peter Wyhinny told Fleet News: ‘This engine will feature all of Seat’s latest Ecomotive technology and offer emissions of less than 90g/km, which puts us among the very best in the Leon’s sector. We also believe this makes the Leon a superb fleet proposition, even more than the previous model.’

In S and SE trims, the Leon comes with a torsion beam rear suspension, which offers a comfortable ride and composed handling. The most powerful petrol and diesel models have an independent rear suspension set-up, while all FR versions feature stiffer suspension and a 15mm lower ride height.

This gives a firmer ride, but the Leon remains surprisingly supple over bumpy roads. Seat will also introduce Cupra versions of the Leon after the car’s launch.

There’s also a classier feel to the new Leon’s interior,and the boot is now 39 litres bigger than the old model’s at 380.

Every Leon comes with air conditioning, Bluetooth, five-inch touchscreen with steering wheel controls for the stereo and phone. Prices start at £15,670, with a 1.6 TDI SE coming in at £18,490, which compares well to the £20,500 Volkswagen asks for a Golf 1.6 TDI SE.

With a car as competent and able as the new Leon priced so keenly, it could well be the car to put Seat back on track and back in the minds of more fleet drivers.

If the Ecomotive version of the 1.6 TDI is as good to drive as the 99g/km version, Seat could well be on to a winner. The engine is smooth and pulls strongly from low revs with little noise. It’s also happy to propel the Leon along motorways without fuss or disturbance, and there’s no need to change down from fifth gear when you need to accelerate.

The same can be said of the brawny 2.0-litre TDI with 148bhp. As with the previous generation 2.0-litre TDI engines, this one has a zesty turn of speed, knocking off 0-62mph in 8.4 seconds. It also delivers muscular in-gearacceleration, though it’s accompanied by some trademark diesel rumble and is not as hushed as the 1.6 TDI.

We also sampled the 104bhp 1.2 TSI petrol engine, which is a free-revving and refined motor. However, you need to work this engine hard on faster roads and make more use of the gears for motorway inclines or overtaking.

Road and wind noise are kept to a minimum inside the Leon’s cabin, while space for passengers and driver is notably better than the outgoing model’s.