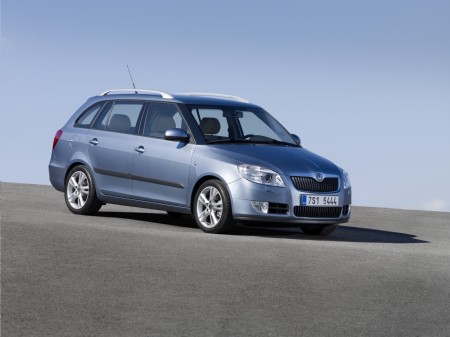 Last year we saw the Peugeot 207 SW, and later this year the Renault Clio Sport Tourer joins the party.

Yes, sticking a large boot on a modestly-sized hatchback looks set to be the trend for 2008.

Skoda is not the kind of firm to miss a trick like that these days, so from February we’ll see the surgically enhanced derrière of the new Fabia Estate shimmy into view, following on from its older brother which went out of production last year.

Based on its smaller brother, the Fabia hatchback, the Estate ups the boot space by 235 litres, giving 42mm more headroom to rear passengers in the process.

Like the hatchback, there are three trim levels available, simply called 1, 2 and 3. Skoda says that equipment levels on the Estate are higher than that of the hatchback, but don’t go expecting great luxury, especially not in the Fabia 1 tested.

Included as standard are electric front windows, steel wheels, an MP3 player socket, and that’s about it.

If you want remote locking, alloy wheels or air conditioning, you’ll have to pay extra for the options or upgrade to the Fabia 2. Despite its short spec sheet, the Fabia does feel well made.

Coming from the same stable as Volkswagen and Audi, the chaps at Skoda do know how to screw a car together and while some of the materials feel a little on the cheap side, they’re not likely to fall apart.

The seats adjust for height and the steering wheel for both reach and rake – as a result, the driving position is comfortable if rather upright.

The 80bhp diesel engine is one of two 1.4-litre TDIs available (the other packs 70bhp).

It’s very agricultural in timbre, but consistent and smooth in its delivery, and is hooked up to a satisfyingly solid five-speed gearbox.

From standstill, 62mph arrives in 13.7 seconds.

Not exactly rushed, but this is an engine built for economy – it returns a claimed average of 61.4mpg and emits just 120g/km of CO2, meaning a VED bill of only £35.

And once on the move, the scarcity of equipment and quality of materials is made up for by the driving experience – it’s actually rather good.

The chassis gives a good balance between comfort and handling.

The steering feels direct and, thanks to the decent gearbox, makes for a car that belies its slightly awkward styling to give an enjoyable drive.

Ah yes, the styling. I was no fan of the old Fabia, but I still preferred those square looks over the new incarnation.

In hatchback form it’s no looker, but as an estate it’s verging on the ugly.

The extra height makes it look very boxy and the wheels, although 16 inches in diameter, look tiny.

However, the Fabia Estate is cheap when compared to its most similar rival, the Peugeot 207 SW.

The Czech carmaker has varied targets in its sites, and quotes other rivals as including hatchbacks like the Kia C’eed, Vauxhall Astra and Ford Focus.

Skoda’s car is cheaper and has more boot space with the rear seats folded down than any of these.

Suddenly, the Fabia Estate looks like quite a bargain.