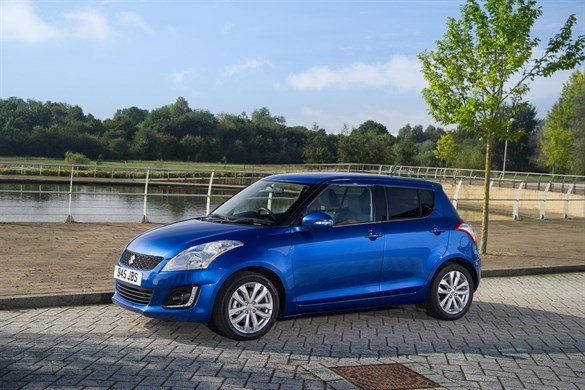 Suzuki has been keen to offer diesel engines in its line-up in Europe where possible. Despite being the world’s second-largest engine producer (including motorcycles, power equipment and marine units), it doesn’t build its own diesels.

Over the years, PSA, Renault and Fiat have taken turns to supply diesel engines for Suzuki models, and Fiat’s 1.3-litre Multijet had been available in the Swift until last year.

However, despite the 1.3 DDSi having the lowest CO2 emissions of any Swift at 101g/km, it, didn’t hit the sub-100g/km benchmark many fleets expect for a car of its size. As a result, the model accounted for only 6% of Swift sales.

The new Dualjet does break that benchmark by using the same capacity 1.2-litre petrol engine as other models in the range, but with a number of modifications.

Its power output of 90hp is slightly lower than the standard engine’s 94hp, but it produces a shade more torque, and, importantly, maximum pulling power kicks in at 400rpm lower – 4,400rpm instead of 4,800rpm.

A higher compression ratio than the standard petrol engine, plus more sophisticated cooling systems to enable that to happen (along with modified gearing) has resulted in better efficiency with lower fuel consumption and CO2. It also has automatic stop-start as standard.

These changes mean CO2 emissions are 99g/km instead of 116g/km for the standard engine, while combined fuel consumption is 65.7mpg instead of 56.5mpg.

If you compare the Dualjet with the diesel engine it replaces, a driver is also four benefit-in-kind tax bands lower because the 3% diesel supplement doesn’t apply.

The engine is smooth and refined, and although there aren’t the soft-touch plastics in the cabin you’d find in a Volkswagen Polo or Ford Fiesta, the Swift is roomy and much better equipped for the money.

The Swift might be entering its final full-year on sale in its current guise, but it certainly looks the part and is ideal for the cut and thrust of town traffic.