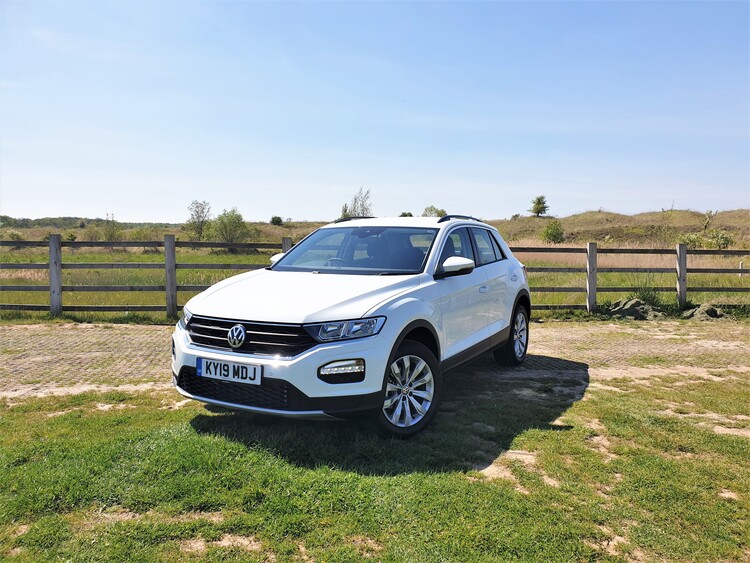 After six months and 5,200 miles, Volkswagen’s small SUV has now been returned.

The time seems to have flown by during which the T-Roc has proven a capable and practical car, small enough for city driving, easy to park, quiet and refined enough for motorway cruising and big enough to carry four adults in comfort.

The T-Roc is a good car, but it isn’t a car I’ve formed a lasting relationship with. In fact, it has failed to provoke any kind of emotion.

The interior is functional and the exterior is unmistakably Volkswagen, but it has no striking features to help it stand out in a crowded market of small SUVs.

Perhaps if it was the more costly R-Design model with its bigger wheels and more dynamic body styling in one of the range’s colour customisation options, I would feel differently.

If our T-Roc was ice cream, it would definitely be vanilla...but everyone likes vanilla, don’t they?

Long distance driving is a pleasure. During the 250-mile trip from my Peterborough home to a holiday in Devon, I didn’t once suffer any aches and the adaptive cruise control makes motorway miles a breeze.

The car can also carry a week’s luggage for four without issue.

The T-Roc has proved a star in the fuel efficiency stakes. The official fuel economy figure is 52.3 miles per gallon and during our test period I have achieved a budget-friendly 54mpg from the 1.6TDi engine that never felt underpowered. So, no complaints about this powertrain.

It’s worth pointing out that, while the 1.0 TSI petrol engined T-Roc is much less fuel efficient than the diesel on test (a claimed 44.1mpg), the P11D price is also £3,000 cheaper meaning that over a four year/80,000 mile lifecycle the petrol version is around 2p per mile cheaper to run than our 1.6 diesel.

However, the driver experience of the more torquey diesel motor is likely to be better than the small petrol.

The only problem I have encountered was back in June when the window wipers stopped working followed by some warning messages appearing on the dash showing a fault with them and with the adaptive cruise control I had been using. Turning cruise control off returned power to the wipers and it’s a problem that hasn’t recurred.

I would have no reservation in recommending the T-Roc as a good fleet choice.

According to 2018 SMMT (Society of Motor Manufacturers and Traders) figures, white is the UK’s third favourite car colour behind grey and black.

Rewind 10 years and white doesn’t appear in the top five.

Perhaps it’s all down to the Apple iPod, but white seems to be becoming the new black, meaning a colour that previously would have been hard to re-sell is now one of the most popular.

The T-Roc is available in 10 colours, the ‘pure white’ paint on our test model is a £360 option but drivers can choose Urano Grey for free.

While the car has a relatively conservative look in the more popular colours, its design comes alive when painted in Orange, Yellow or Electric Blue.

An optional coloured roof gives the car a more unique appearance, which is all part of VW’s strategy to give the model appeal to a wider audience.

The SE grade interior is a little drab, with lots of black plastic and black cloth seats. Stepping up the Design trim adds a splash of colour to the interior trim and seats.

Our car has stronger residuals though, retaining 30% of its value after four years and 80,000 miles.

The 1.0-litre petrol model achieves a stronger result (33%), but lacks the long-distance fuel economy that the diesel manages.

As fuel economy and running cost are high on a fleet manager’s agenda, mpg figures will have been reported and analysed on all of our long term test vehicles at some point during their test cycles and the T-Roc is no exception.

According to data from the Fleet News running cost calculator (www.fleetnews.co.uk/car-running-costs-calculator) our 1.6TDi SE T-Roc has a WLTP fuel efficiency figure of 50.4mpg with a running cost per mile figure of 35.73ppm for a four year/80,000 mile cycle.

The WLTP figure of 50.4mpg is quite accurate – my daily average is 49.6mpg, but I don’t make many long journeys or motorway miles.

However, a recent return journey from Peterborough to Birmingham saw an amazing 70.4mpg on the onboard computer. A regular high mileage or long distance driver could benefit from this impressive fuel efficiency.

For the past two weeks I’ve been driving a SsangYong Musso, a vehicle that couldn’t be more different to the T-Roc. SsangYong may be considered a budget brand but the Musso had some great extras including heated and air conditioned seats, built in sat-nav and excellent reversing camera which made it very enjoyable.

I’ve missed these extras since being back in our SE model T-Roc. It doesn’t have such luxuries, not even built in sat-nav, something I’ve always considered to be a ‘must have’ and have regularly turned my nose up at vehicles which don’t come with this mainstream addition.

Volkswagen has, instead, equipped the T-Roc with Android Auto and Apple Car Play. It’s a system I’ve never liked, or never thought I liked.

Having had no choice but to use it in the T-Roc I now realise how wrong I was. Android Auto is a revelation, not only does Google Maps provide a high level of clear turn-by-turn navigation but also gives live traffic updates and alternative routes where possible to avoid traffic.

It also accesses all your mobile phone functions. So, as well and taking and receiving calls and accessing your music library, Android Auto will also read out messages and allow you to ‘voice respond’ without pressing a single button, meaning you can keep your eyes on the road at all times. It's a brilliant addition by Volkswagen.

Our test vehicle may be lacking things such as a reversing camera or heated seats but these are available as optional extras at £185 for the camera and £300 for heated seats (as part of the winter pack).

I recently encountered my first ‘breakdown’ in a test car. I use inverted commas because, while I wasn’t technically broken down, the fault did prevent me travelling any further.

While driving to London on the A1 in rush hour traffic and very heavy rain the window wipers became slow, and, after several juddery sweeps of the screen as though they were losing power, they stopped working completely.

After putting the hazards on and pulling onto the hard shoulder, a quick off/on of the key had operation restored only for the same thing to happen a few miles later. This time no operation (other than the squirter jets) would work.

I called the VW assistance number on the key fob which rang and rang with no answer. Eventually I gave up, deciding to call my own breakdown provider.

When I turned on the ignition this time, some warning messages appeared on the dash showing a fault with the wipers and with the adaptive cruise control I had been using.

Turning cruise control off returned power to the wipers and I was able to carry on with my journey.

It’s a fault I haven’t been able to replicate since, despite trying different combinations of wiper and cruise control speed.

Perhaps it was a freak glitch or perhaps the unusally heavy rain had somehow caused havoc somewhere.

Sitting beneath the established Tiguan, and above the smaller T-Cross, the Golf-sized T-Roc enters a fast-growing market segment.

Available in S, SE, Design, SEL and R-Line trim levels Volkswagen anticipates that SE will be the most popular trim with as much as 40% of sales.

This full, five-seat car has one of the largest luggage compartments in its class at 445 litres (with seats up), increasing to 1,290 litres with the rear bench folded forward (392/1,237 litres for 4Motion vehicles).

Driver Personalisation offers individual settings for more than 100 infotainment, convenience, and assistance systems (subject to the relevant features being installed in the car) which are activated by each driver’s personal key.

Personalisation continues with a variety of bold exterior colours, contrasting roof, pillar and dashpad colours and various interior trim versions. Our test vehicle has a P11D value of £23,510.00, is WLTP-type approved and offers a manufacturer's combined fuel efficiency figure of 50.8mpg.