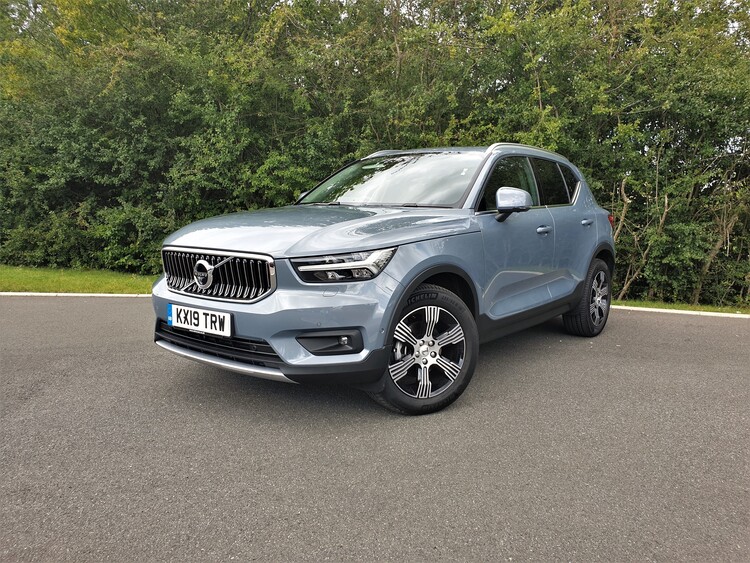 After clocking up close to 3,000 miles, my time with the Volvo XC40 has ended. It has proven to be highly capable, extremely comfortable and a worthy winner of the 2019 FN Award for New Company Car of the Year.

The driving has been a mix of motorway miles and urban runs, resulting in an average 41.1mpg with 51.3mpg achieved on steady motorway drives. Official figures for the 152PS, four-cylinder D3 unit (with an eight-speed automatic gearbox and FWD configuration) are 47.1-44.8 mpg, with C02 emissions of 131-134 g/km and BIK is 34%.

When the XC40 arrived in August, the tilt and slide panoramic glass roof, with sun curtain (part of the £1,600 Xenium Pack) was a welcome addition. As the year has worn on and morning temperatures now often struggle to get above zero, the addition of heated seats and a heated steering wheel (the latter part of the £300 Winter Pack Plus) have been a combination that I would recommend to anyone; pure luxury. 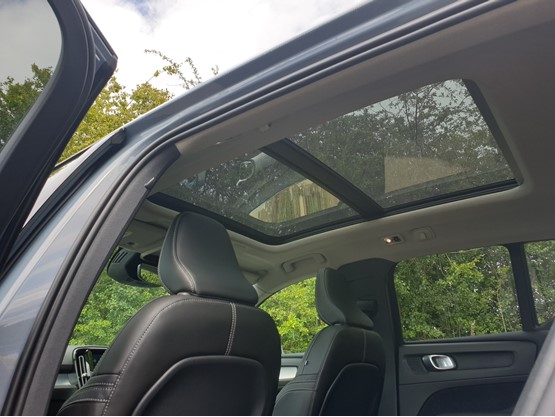 As impressed as I have been with the Swedish baby SUV, there have been some gripes.

In September, the windscreen wipers failed. Sometime between the fault occurring and the car going to the Volvo dealer, the fault rectified itself, but the service department suggested it still come in. On collection, the dealership confirmed there had been a ‘glitch’ and the diagnostics had picked up an intermittent fault.

Other minor quibbles include the passenger-side wing mirror not angling downwards when reverse is selected, and the dash-mounted boot release button working intermittently at best.

On balance though, have these small issues affected my enjoyment of the XC40? No. Would I recommend it to any fleet decision-maker or company car driver? Absolutely.

Should drivers consider the T3 petrol instead? - November 2019

Great rivalries make for great spectacle and split opinions: Ali versus Frasier; Senna versus Prost; petrol versus diesel. Okay, so that last one may not be quite so iconic, but it has nevertheless been a long and, at times, contentious rivalry.

I was a late convert to diesel, having for many years been a loyal petrol supporter, but great mpg and bags of torque finally persuaded me to its rattily, oil-burning charms. I do still however, have a penchant for petrol, so I was pleased to have the opportunity to test the XC40 T3 – the petrol equivalent of our long-term test D3. 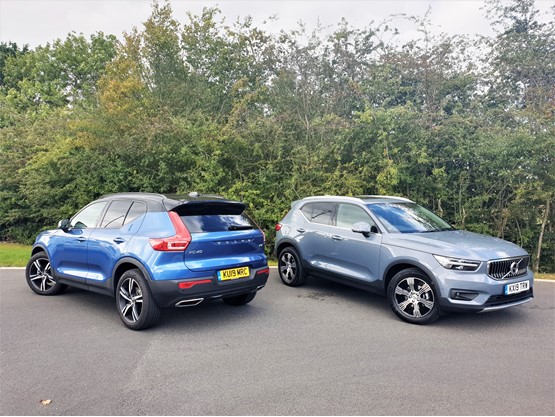 Short journeys in the T3 resulted in an average of 34.8mpg. Motorway trips it was 43.4mpg. In comparison, we’re seeing an average of 40.2mpg for urban jaunts in the D3, with 51.3mpg achieved on steady motorway runs.

Yes, the T3 was a bit more fun and engaging to drive and it felt better mated to the auto gearbox than the D3. But, when you compare both the official and unofficial stats for both models, it’s clear the diesel wins this duel from a fleet perspective.

I’ve now clocked-up around 1,000 miles in the XC40 and it’s easy to see why it won the coveted Fleet News Award for New Company Car of the Year 2019, voted for by fleet-decision makers.

The 1,000-plus miles involved a combination of long motorway trips and shorter urban journeys and have shown the XC40 to be an accomplished all-rounder. The comfortable seats and excellent driving position mean you arrive at your destination feeling refreshed and ready to go; while its compact dimensions and 360º Surround View parking camera make negotiating even a tight space straightforward.

One of my early misgivings, however, has also proven itself over the course of these journeys: that of the gearbox and engine combination.

The eight-speed automatic transmission is slick and a joy to use. The stubby selector falls easily to hand and makes gear selection a quick and simple process. It is not, though, in my experience, particularly well suited to the D3’s 150PS engine. 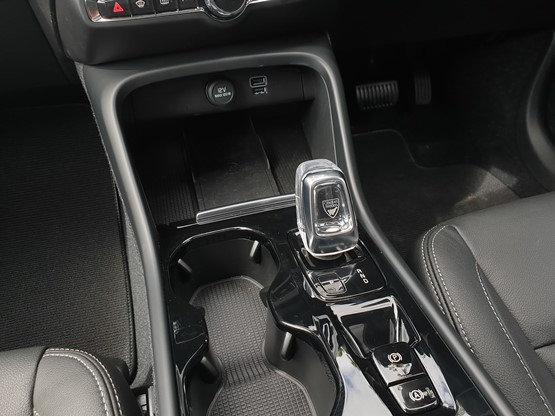 Whether it’s a lack of torque, turbo lag, a quirk of the gear ratios of the auto ’box, or a combination of some or all of these I’m not sure. But, under some driving conditions, performance is lacking.

The issue comes to the fore when you back off the accelerator in preparation to apply the brake – say when approaching a roundabout for example – and instead of needing to slow down further, you then start to accelerate again.

In these situations there is often a lack of power. The revs and noise rise, but a ‘laggy dead-spot’ means this isn’t matched by the levels of forward motion you’re expecting, or need.

It also happens when you apply the brakes to scrub some speed off and then need to accelerate smartly. This could be remedied with a 190PS D4 under the bonnet as the extra torque (400Nm vs 320Nm) would prevent any disharmony between the engine and gearbox.

Wiper glitch takes the shine off the drive - September 2019

A little over two weeks after taking delivery of our XC40 long termer and with just more than 1,250 miles on the clock, I was greeted with an unwanted message on its 12.3-inch active TFT crystal display: Wiper failure – service required.

Using my full technical knowhow I turned the ignition off and on again, but, alas, the warning remained.

Sometime between the fault occurring and the car going to the local Volvo dealer for some diagnostic TLC, the fault rectified itself, but the service department suggested it still come in for a once over.

On collection, the dealership confirmed there had indeed been a ‘glitch’ and the diagnostics had picked up an intermittent fault; which the technicians had now remedied.

Wipers are, of course, one of those easy-to-overlook bits of kit on a car. When they work you completely take them for granted. When they stop working, however, it’s a different story. Practically and legally, you’ve got to have ’em!

My colleague suffered a similar issue with his VW T-Roc, although on that occasion it forced him to pull over onto a motorway hard shoulder.

As vehicles become more complex the likelihood of software ‘glitches’ increases, as does their potential impact on keeping fleet drivers mobile.

Winning the 2019 Fleet News Award for New Company Car of the Year is no mean feat. Exclusively voted for by fleet-decision makers, it takes something special to scoop this hotly contested accolade.

So it was with some anticipation that I awaited delivery of our new long-term test XC40 D3 Inscription.

According to the marketing people “Momentum is a proud expression of urban style; R-Design is the XC40 in its most dynamic, sporty form; while Inscription embodies modern Swedish luxury at its most progressive”. 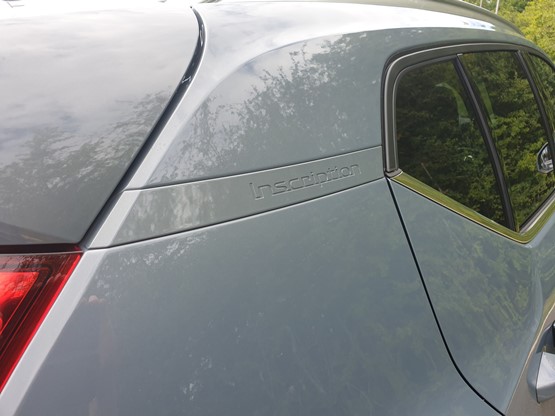 As you would expect from Volvo, there’s also an extremely impressive list of safety features included as standard. After all, the manufacturer has “the safety vision that nobody will be killed or seriously injured in a new Volvo car by 2020…”

Our front-wheel-drive D3 Inscription is fitted with an eight-speed automatic transmission which bumps CO2 emissions up slightly to 131g/km and BIK to 34%. Economy takes a slight dip, with official combined WLTP figures of between 44.8mpg and 47.1mpg.

It will be interesting to see how well suited the D3 engine and auto ’box are, which could either make for relaxed mile-munching, or a frustrating lack of oomph. Time to hit the road and find out.