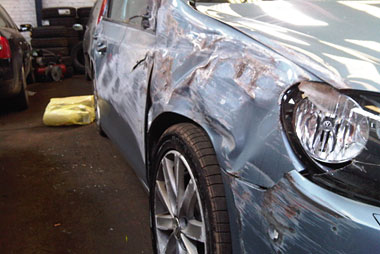 How much attention do you pay to your car’s crash safety protection?

If you’re like me, probably not a lot – looks, badge and performance are of far more interest to me.

However, I’ve rather changed my mind on the importance of a good EuroNCAP rating after having ‘a big one’ in the Golf.

Briefly, a car swerved into my lane of the motorway, I hit him and was then pushed into the central reservation before being flipped over and skidding along the fast lane of the A1 (M) on the driver’s side.

As a result, the Golf is no longer with us as it is a write-off. Damage to three sides of the vehicle, and the deployment of virtually every airbag, consigned the Golf to its scrapyard fate.

I say ‘virtually’ every airbag, because the driver’s and passenger’s front bags didn’t deploy.

This is not a complaint, actually admiration of how clever these crash protection systems are.

Because I managed to swerve slightly away before impact, the car registered that it was not a head-on crash and decided not to deploy these bags.

And it decided this within a fraction of a second. Impressive stuff.

My previous reports have been full of praise for the Golf’s economy, looks and performance, and now I can add another to the list – it’s a bloody solid car.

When I look at the damage to the car, and think back to the violence of the impacts I experienced, I am glad I was driving a Golf when the crash happened.

It’s testament to its solidity that I walked away from this crash with a sore thumb and a stiff shoulder. A lucky escape indeed, which is more than can be said for the Golf.