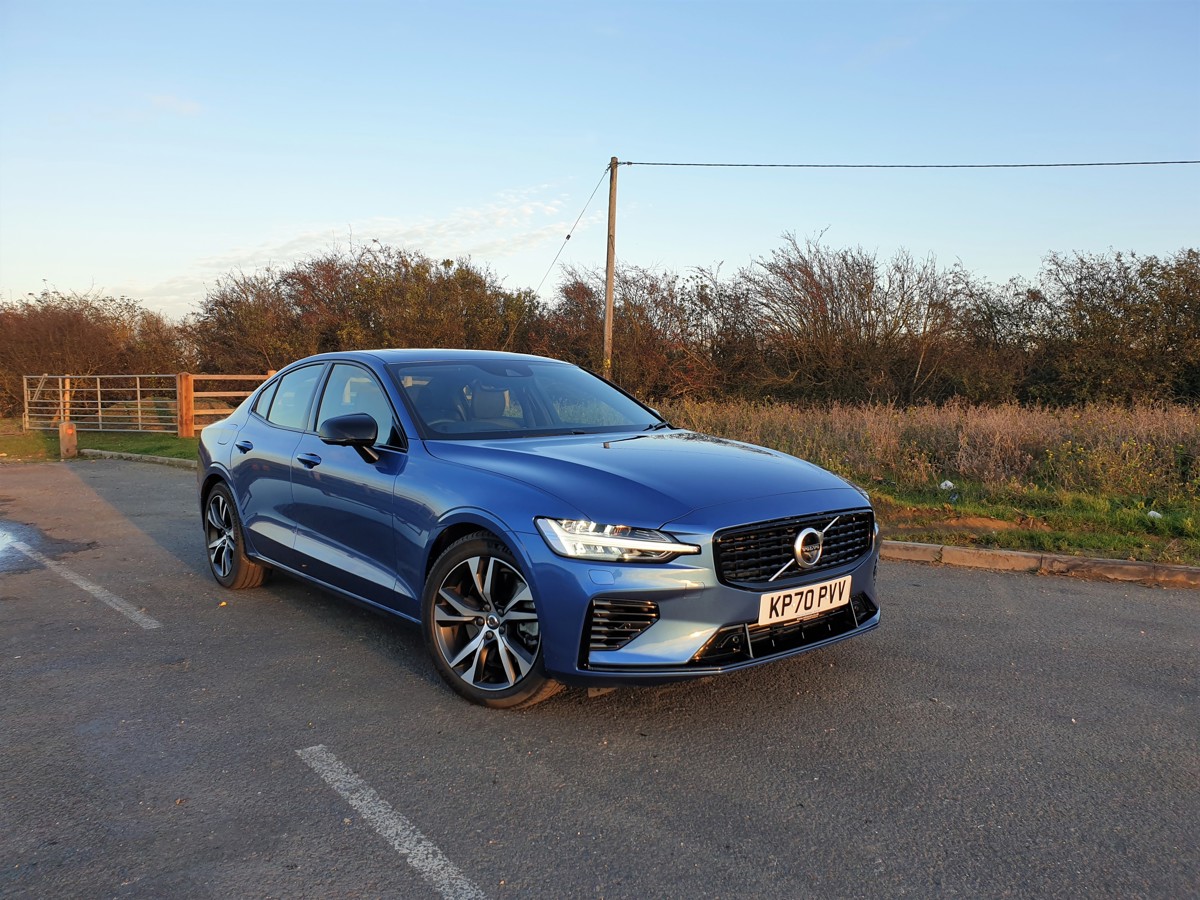 Our time with the Volvo S60 T8 has come to an end and, after seven months and 3,000 miles, it’s lived up to all my expectations. In a Covid-free world I could have quite easily doubled my time behind the wheel of the S60. It makes travelling a pleasure and I’d be lying if I didn’t say I was more than a tad disappointed that it’s leaving.

Having configured ‘my’ perfect S60 more than a year ago, its arrival was scuppered by the pandemic. KP70 PVV finally turned up in October 2020, looking even better in person than it did on Volvo’s configurator.

I suffered just one glitch during my time with the car, on a journey to Crawley. About two miles from my destination the speakers emitted a loud ‘pop’ and I lost all sound from the infotainment system. We experienced a similar issue in our XC60 long-term test car. The sound returned after I stopped and switched off the car and didn’t happen again.

While the claimed three-digit fuel economy figure for the plug-in hybrid system was insuperable, a review of the car’s trip computer revealed a figure of 43mpg was achieved over the course of our test. Fully charged, the battery will comfortably deliver 22 miles of zero-emission running.

Admittedly, if you ‘press on’ a bit or don’t bother to charge the battery, the 2.0-litre supercharged and turbocharged engine can get a bit thirsty. But, with more than a dozen lengthy motorway trips under its belt, the overall figure is close to what I’d expect from a similarly sized diesel car – so no complaints.

It’s difficult to tire of the car’s point-and-squirt acceleration, but its handling errs on the softer side. Those looking for a more engaging drive might be better suited to the S60 T8 Polestar Engineered, which has uprated suspension.

It’s our penultimate test of the S60 T8 and I’ve been thinking about how it compares with rivals.

The BMW 330e is becoming the most ubiquitous PHEV on UK roads, offering great driver engagement and a balance of efficiency and performance. Mercedes- Benz, meanwhile, is unique in the sector, offering the C 300 de with its high-mileage-friendly diesel engine and a petrol-plug-in-hybrid C 300e.

Volvo’s decision to place the S60’s T8 powertrain as the flagship model in the range means it has greater performance than its German counterparts, but its £5,000 price difference means it’s slightly out of reach for some. Running costs are also 5-7ppm higher when comparing similar trim levels. 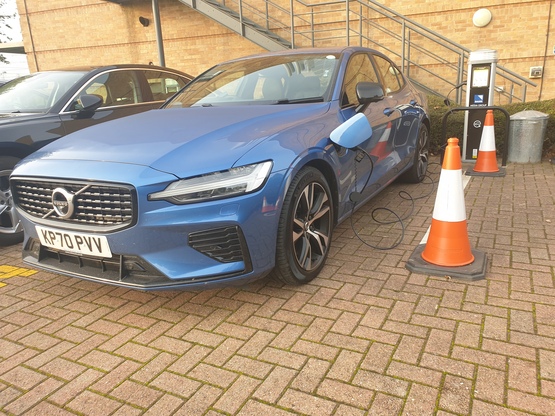 We’d love to see a cheaper S60 PHEV with around 200-250PS and a price to worry the leaders in the segment, of less than £40,000. That would make it a more attractive company car proposition than the T8.

Other brands are starting to use PHEV technology for their flagships, however. Mercedes has confirmed the new C Class AMG will be plug-in powered, while the Peugeot Sport Engineered 508 also uses electric power to boost performance and reduce emissions.

These flagship models are a great way to raise the profile of PHEV technology among those who are considering leaving their company car scheme and aren’t ready to go fully electric.

Would it be better as a fully-electric car?

Just as Volvo announced to the world its intentions to only sell fully electric cars by 2030, the brand’s new XC40 Recharge P8 – its first electric car – arrived for testing and I thought it would be worthwhile to compare the two.

The XC40 sits on a different platform to the S60, sharing a base with the Polestar 2, rather than our car’s SPA platform, which is used for the rest of the Volvo line-up. While no specific plans have been announced to launch electric versions of existing SPA-based cars, Volvo has confirmed that the next XC90 will use an updated
version of the platform and will be offered with pure electric powertrains as well as PHEVs. 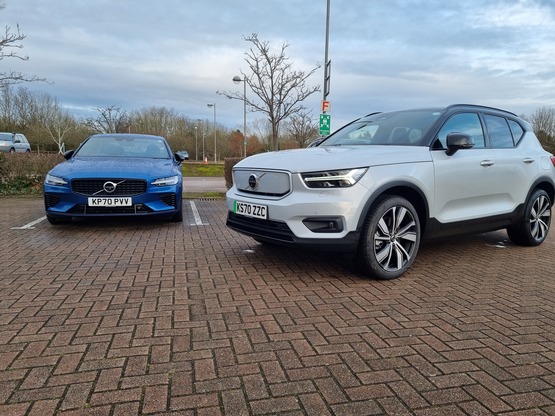 I’ve no doubt the BIK of 1%, compared with the S60’s 11%, will play a part in swaying opinion, but, in reality, the S60 is more refined, better riding and has a higher-quality interior than the XC40. It also has the capability to cover 500 miles on a tank of fuel, while the electric car will barely manage half that when fully charged.

In towns and cities, both offer the same environmental benefits and the performance of the two cars is not dissimilar. The XC40 feels more eager when you stab the throttle, but once the S60 gets into its stride the two can easily keep pace with each other.

As a petrolhead, I prefer the visceral experience of the T8 when compared with the P8, it just has more character. We have to face reality though. The drive towards fully electric fleets is already underway and, while it’s not perfect, the XC40 P8 shows us that we have little to fear of an electric S60 – I’d just like to
hang on to my one a little bit longer.

Practicality has not been overlooked

Having successfully house-trained my puppy – and with little else to occupy my free time – some new flooring was needed. With a click-and-collect order waiting for me at a well-known DIY outlet, I finally had a chance to test the S60’s practicality.

Upon returning to the car with the trolly full of laminate, I realised I had no idea if the Volvo’s seats would actually fold. Thankfully, they do and are electronically triggered by two switches hidden behind the left-rear headrest.

Once again, it trumps both German rivals for boot space with more than 500 litres.

The Swede has an advantage as its hybrid battery lives in the centre of the car, rather than being shoved under the boot floor.

Once my hometown was covered in a snow a week later, a final trip to ‘finish the job’ was needed. Luckily, the S60’s All-Wheel-Drive mode could be called into action and make sure I didn’t get stuck. 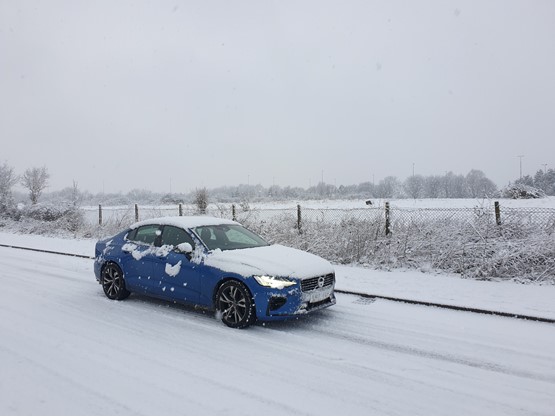 Volvo has been producing PHEVs for quite some time. In fact, the first plug-in car I tested for Fleet News – back in 2016 – was a Volvo XC90 T8. Now, there’s a plug-in hybrid option on every Volvo model.

The T8 powertrain is ‘well established’ then. It uses a 2.0-litre petrol engine that is both turbocharged and supercharged, while the electric motor helps boost power to a combined 390PS with 640Nm of torque. 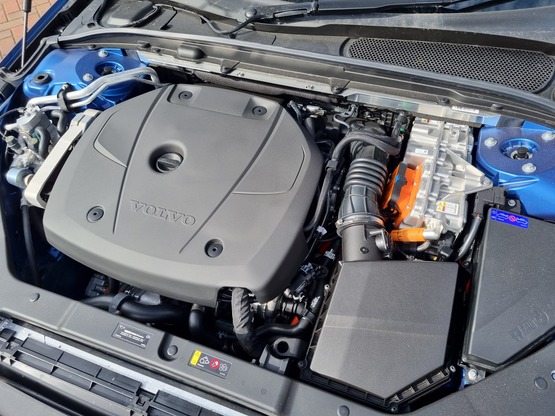 It is, therefore, a quick company car. Acceleration from zero to 60mph is less than five seconds and the mid-range power surge makes light work of motorway slip roads and overtaking manoeuvres. Top speed is limited to 112mph, however, as part of Volvo's commitment to safety.

Since the T8 ‘twin engine’ was conceived, Volvo has made numerous updates to improve refinement and fuel consumption. Earlier cars with the same engine felt more raucous under acceleration and the transition from electric to petrol was noticeable.

Thankfully, none of these issues are present in our S60 T8.

The transmission is much more reactive, while the interaction between the engine and electric motor has been fine-tuned and is barely perceptible.

After 1,000 miles behind the wheel of our S60, it’s fair to say I’m becoming quite attached to it. While saloon cars are a bit less practical than SUVs and estates, there’s something satisfying about a sporty-looking compact executive and Volvo has got the proportions perfect on the new S60.

The driving position is low and, thanks to the high centre console, you feel cocooned inside the cabin with the steering wheel and pedals falling to hand (and foot) just as you’d like them.

Volvo is usually recognised for safety, but it’s also a brand that puts comfort high on the agenda. Our R Design sits on firmer springs, but it still offers a graceful ride.

Creature comforts are in abundance too. All plug-in hybrid models get electrically adjustable front seats that are also heated, dual-zone climate control with remote pre-conditioning, adaptive LED headlights that move as you steer and parking sensors with rear-view camera. 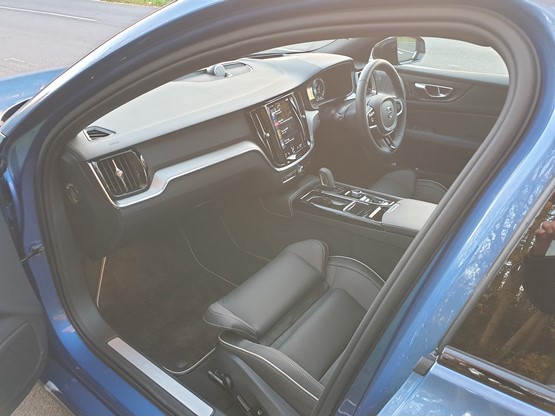 Our car has been optioned with a few extras to make the experience even more enjoyable. The £450 Winter Pack adds a heated steering wheel, heated rear seats and a heated front windscreen. All of which are welcome during the winter months.

While all S60s come with cruise control and an array of safety systems, the £1,600 Driver Assistance Pack adds Pilot Assist with adaptive cruise control, which can keep the car in its given lane and assist the driver in stop-start traffic. It also adds blind-spot monitoring that can intervene if it thinks you’re going to cross another vehicle’s path.

The Bowers and Wilkins Technology pack is probably the most extravagant option, at £2,500, but for someone that spends a lot of time in the car and likes their music, the 14-speaker 1,110-watt sound system is invaluable. It also includes smartphone integration via Apple Carplay and Android Auto.

Rounding off our S60’s specification is the £1,975 Lounge pack. The highlights are a panoramic sunroof and 360-degree camera system. An autonomous self-parking feature also features, but we’ve yet to try it.

When it comes to wheels, we stuck with the standard 18-inchers although the optional 19-inch units do give the car improved road presence at the risk of a firmer ride.

I’ve been patiently waiting for our new S60 to arrive for almost a year. You see, a global pandemic happened and it meant Volvo’s factories had to close. It then had a big backlog of orders to fulfil because, seemingly, everyone now wants a new Volvo.

Thankfully, things are slowly getting back to normal in the world of car production and Volvo’s ex-fleet boss and new head of sales Steve Beattie says lead times for plug-in models are down to around eight weeks.

So, let’s talk about this new S60. It’s the first Volvo to launch with no diesel option and, while that seemed to be an odd move when it came out around 18 months ago, now it makes perfect sense.

Volvo is moving away from the core-fleet user and towards middle management, where low benefit-in-kind (BIK) tax, high performance and luxury are the order of the day.

Nothing suits the bill better than a plug-in hybrid, that’s why we opted for Volvo’s T8 ‘Recharge’ model, rather than the mild-hybrid B5 version. 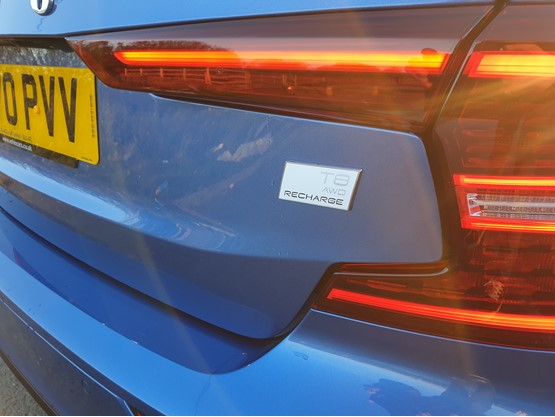 Emitting 38g/km of CO2 and with an official electric range of 36 miles, the S60 falls into the 10% BIK bracket. It uses a 2.0-litre petrol engine, which powers the front wheels and an electric motor that looks after the rears. The battery, meanwhile, is cleverly packed into the car’s floor so it doesn’t eat up boot space.

First impressions? Well, look at it. In bursting blue, it’s as gorgeous to drive as it is to behold and it's already averaging a diesel-like 50mpg.

The Volvo has a trick up its sleeve, however. It is substantially more powerful. Boasting a 390PS output, with all-wheel drive, the S60 sits in a league of its own in this segment.