FOR the metrosexual male these days, the manbag has become a must-have item. A rucksack says you spend too much time yomping through mud in Gore-Tex with a Thinsulate tea cosy on your head, while a briefcase suggests that you sit on trains shouting down a mobile about Excel spreadsheets.

A manbag says you are stylish, modern and relaxed, but still professional and committed. The men on its promotional video for the new premium lower-medium contender were all carrying manbags. Just the sort of people Volvo is hoping to attract with the new C30.

Oh, how they wish it was that simple. All of Volvo’s efforts in the past few years – the floating consoles, the white leather seats, the curvier lines – are all aimed at raising the brand’s profile with younger buyers. The C30 will prove, once and for all, whether it has worked.

For younger buyers, especially those young executives, spend more money on speccing their cars. They bestow a toned, athletic kudos on the badge – and they might just stick with you for the rest of their lives. But like a kid at a new school, being accepted into the cool clique is a tough job.

And no brand has grappled with this difficult audience as much as Volvo. It has made some strides, but with the C30 it reckons it can break into the territory dominated by the Volkswagen Golf, Audi A3 and BMW 1-series. Make it there, as the song goes, and you’ll make it anywhere.

Volvo has not gone into it half-heartedly. The C30 looks like nothing else in the sector. Whether that’s a good thing is an entirely subjective view. Me, I really like the way it looks, with its chopped-off back end and long glass hatchback.

But we had high spec, metallic-painted, big-wheeled versions glittering in the Majorcan sun.

A dark, bog-standard model basking in the urban grunge may not have such allure.

Volvo knows it has got a ‘Marmite car’ on its hands and it seems the marketing campaign will reflect this likely polarisation of opinion by challenging the audience to decide on which side of the fence it will fall.

It is looking for fleets to be a major customer for this car. There aren’t going to be many for sale – 5,000 next year, 7,000 the year after – but it believes up to half will become company cars.

Key to getting on choice lists is to be price and specification-competitive and John Wallace, the firm’s corporate sales and leasing manager, says Volvo has worked hard to align the range with the Audi A3, so fleet customers can compare like-for-like.

RV predictions are, frankly, all over the place, reflecting what a difficult car to pigeonhole this is. Some think it will be just above the Golf in three-years/60,000-miles’ time, others in the industry reckon it will match the A3.

With the target market in mind, engineers have tried to make this the sharpest-handling Volvo there is, and it comes with options such as iPod connector, a floating console with a surfy pattern on it, and two-tone body colouring, with even a white and brown scheme to match your manbag.

In keeping with its lack of concession to usual Volvo values, this is a resolute four-seater and executives are keen to point out that this is not a family car, although of course safety levels are still high and, even though this is basically an S40 with the boot chopped, rear-end crash protection is as good as its saloon brother.

But as bold as this car is, it is difficult to imagine Volvo getting the numbers of young people it needs into its showrooms.

That’s why fleets will be a key route to market. More likely is that showroom traffic will consist of empty-nesters looking to downsize. With not a manbag in sight.

FROM the driver’s seat, the C30 looks almost identical to the S40, which is no bad thing. Glance behind and it’s a different world. The two rear seats are fairly central to give plenty of shoulder room and behind them is the glass hatch.

It is certainly helpful when parking, but needs the fussy rubber tonneau cover to stop it being very helpful to opportunist thieves.

There were two engines to test on the launch: the D5 Geartronic and the 220bhp T5 turbo, in auto and manual. In both the ride is very unforgiving, even on smooth roads.

However, that has not stopped Audi selling lots of sports-suspended A3s.

The steering is vague, though, and while the C30 feels four-square and grippy in corners, you couldn’t say it feels especially fun to drive.

The auto’s shifts are a little too slurry and even Volvo admits it needs an S-tronic-style double clutch system, but its hands are tied until Ford, never the quickest to spot a new trend, develops one.

Just how much the T5 is hampered by the gearbox is clear when you jump into a manual. Transformation. It is faster, seems ready to dance from wheel to wheel through turns and the whole car feels lighter and revitalised.

And with a funky engine note, it has the attitude you would expect of a car aimed at young thrusters.

You have to hand it to Volvo, the C30 pulls no punches and delivers quite a few blows – its individual looks, clever options and competitive pricing should mean it easily sells in the numbers Volvo wants. But will it sell to the younger market the firm so desperately covets? I doubt it. 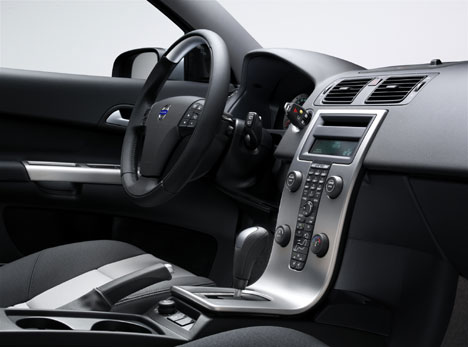