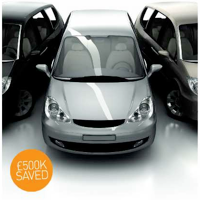 Sussex Community NHS Trust has saved around £500,000 after the reduction of its grey fleet mileage by almost one million miles.

When head of logistics Jim Thomas and his department started to track mileage, they found it amounted to six million miles a year, at a cost of £3 million.

To reduce these figures, Thomas created a travel bureau, promoting it as a one-stop shop for anyone who does business mileage and wanted to change the way they travelled.

He also introduced a pool of 20 hybrid and electric vehicles (EVs), split between most of the trust’s key sites, which meant those needing a car did not need to drive to work but could walk, take public transport, bicycle or car-share. 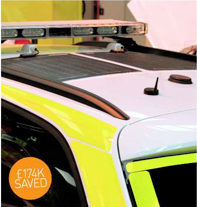 South Central Ambulance Service is expecting to save £174,000 over the five-year lifecycle of 97 emergency vehicles after fitting solar panels to their roofs.

These frontline vehicles, which cover the four counties of Buckinghamshire, Berkshire, Oxfordshire and Hampshire, carry a secondary battery which is used to charge the mobile data technology, some medical equipment, blue flashing lights and radio.

Previously, the ambulance crew either sat in their vehicle with the engine on between jobs charging up the secondary battery or went back to an ambulance station to plug into the electricity shoreline system.

This meant they were unable to respond to calls while the battery was being charged or changed.

The solar panels mean it is no longer necessary to charge using either of these methods, meaning there are savings from shoreline charging, battery replacement costs, fuel savings and vehicle off-road time.

CO2 emissions will also be reduced by 6.5 tonnes. The solar panels have a 10-year life expectancy. 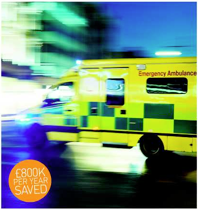 South East Coast Ambulance Service NHS Foundation Trust has reduced fuel consumption by 13% – equivalent to more than £800,000 a year – by fitting a dynamic speed control system to its 300 ambulances.

The initiative formed part of a three-phase driver safety system in 2014 that also included fitting internal and external CCTV cameras to vehicles and telematics to monitor driver behaviour.

Additionally, as the vehicle’s acceleration profile is controlled, wear-and-tear is improved, as is ride comfort.

The technology has been fitted to all accident and emergency vehicles and is to be introduced into patient transport services vehicles and other support vehicles on the fleet.

The organisation, which spends approximately £6.6m a year on fuel responding to emergency calls, is re-investing the saving into frontline services. 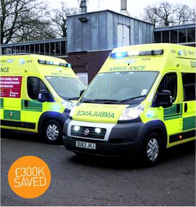 West Midlands Ambulance Service has cut its annual maintenance bill by £300,000 by fitting alloy wheels to its 368 ambulances. The organisation has found that alloys provide better heat dispersion than standard steel wheels, which reduces wear-and-tear on brake discs and pads.

This has allowed the trust to extend service intervals on the ambulances, which cover 40,000 miles a year, meaning that, as well as discs and pads, consumables such as oil and filters are not replaced as often. “It was an idea that we had internally and trialled on a few vehicles,” says Tony Page, general manager fleet services at West Midlands Ambulance Service. “We tried venting the brakes by fitting ducting to where the front fog lights are, but fitting alloy wheels made a fairly significant difference and allowed us to extend maintenance intervals from 6,000 miles to 9,000 miles.”

The alloy wheels were trialled on 50 vehicles to begin with, where it was found to save around £40,000 in parts and more than 3,500 man hours annually. This success saw the initiative extended across the fleet. 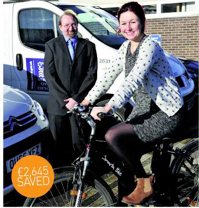 Oxford City Council is saving thousands of pounds a year by using three electric pool cars rather than allowing employees to use private cars for business journeys.

The Energy Saving Trust analysed the business case for the council in 2013 as part of its Plugged-in Fleets initiative.

It compared grey fleet costs at 10,000 miles per annum, over three to six years, against the wholelife costs of the Nissan Leaf. The cost savings from using the Leaf were £720 over four years and £2,645 over six years.

A staff workplace survey found that 82% of journeys were within the Oxford ring road – a range suitable for EVs.

The council created a centralised pool car booking system and introduced a policy that employees could only claim grey fleet mileage in exceptional circumstances.

“There was no big uproar about removing the grey fleet and getting people to use pool cars because there were clear alternatives,” says Jennifer Carr, sustainable energy officer at the council. Other EVs operated by the council include two Citroën C-Zeros and six electric bicycles.

Most popular articles in Wholelife Costs