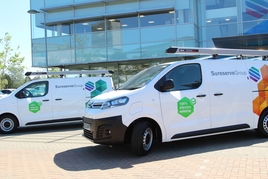 Reducing its impact on the environment has long been a focus of Sureserve Group, with a variety of actions having been undertaken in the past including the installation of solar panels at offices, replacing office lighting with energy-efficient LEDs and working to eliminate single-use plastics.

Its fleet operation has a key part to play in this ambition.

Part of this has been to use the smallest, most efficient commercial vehicles which are suitable to perform their jobs.

Over the past few years, Sureserve Group has continued to replace its existing fleet with Euro 6-compliant vehicles, with 93% of its vans currently meeting those emission standards.

It has now begun its electrification journey by taking delivery of its first 30 battery electric Citroën e-Dispatch vans in June, along with more than 20 electric cars.

“We have always sought to manage our fleet of commercial and company vehicles to the most efficient standards available, and the addition of the e-Dispatch vans will start the next stage in our journey towards a greener and more economical fleet,” says Dean Williams, group fleet manager at Sureserve Group, which has more than 1,700 vehicles.

“As well as the environmental value in using zero-emissions vehicles, we are encouraged by the potential cost savings, and, with fewer moving parts, there’s less requirement for servicing, maintenance and repairs.”

Sureserve Group has been looking at EVs since the first commercial electric vehicle became available on the market, says Williams.

“The range then was around 50 to 60 miles and we had to look at whether it really suited our purpose,” he adds.

“We crunched all the numbers, we looked at the cost of the vehicle, and just felt it wasn’t the right time and wouldn’t meet our operational requirements.”

Since then, the capabilities of electric vans have improved massively with greater range and payloads, and this has allowed Sureserve Group to take on its first batch of fully-electric vehicles.

The drivers who are operating them were selected following analysis of telematics data, looking at how far its vans were driven. Across the group, the average daily mileage is 70 miles.

“In addition to this, as part of our weekly vehicle checks through our FleetCheck mobile app, we’ve been asking who has access to private parking overnight,” says Williams – a key point given Sureserve Group drivers take their vehicles home at night.

“By cross-referencing those two pieces of information, we have been able to build a picture as to what our quick wins were. Who can we get into EVs first?

“I remember hearing a conversation with somebody on a webinar saying ‘don’t try to tackle the whole project in one go, just do it in bite-sized chunks’, and I thought that was very good advice.” 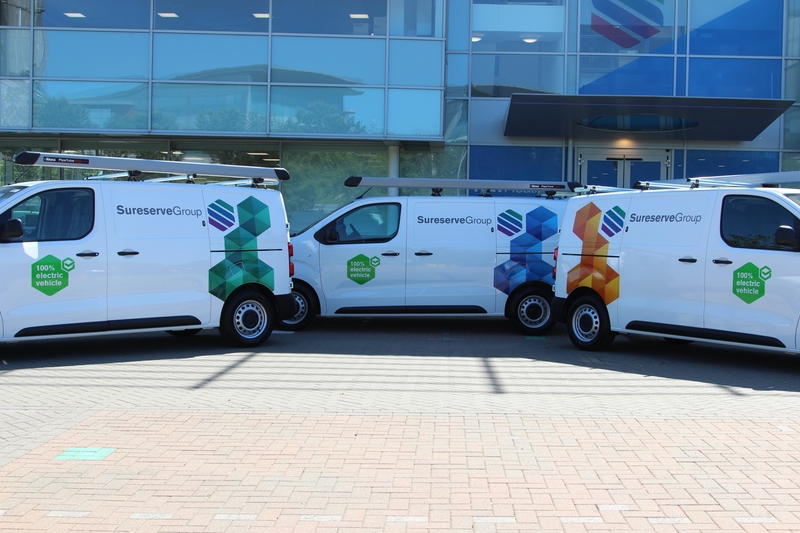 The initial 30 EVs are being operated by a mix of engineers and supervisory staff to spread the understanding of the technology, while Williams says the drivers selected also offer a blend of different driving styles – “some are more urban, some are more motorway driving”.

This variety will allow Sureserve Group to gain data which it can use as it adds more EVs to its fleet; it already has more on order and expects to take delivery of these at the beginning of next year.

To help its employees charge their vehicles, Sureserve Group has partnered with Octopus Energy to supply drivers with Ohme intelligent home chargers and smart energy tariffs as part of a three-year agreement, which would see it transition 600 vehicles to electric over that period.

“Installations are now well under way at people’s homes and we also now have installed chargers at some of our work premises as well,” says Williams.

“As part of the package, all the drivers have been given a card for Octopus’s Electric Juice public charging network, and that gives them access to multiple suppliers across the UK. That number is growing as well.

“But the emphasis really is on charging the vehicles at home overnight because not only is it the most efficient way, but it avoids any downtime for the engineers throughout the working day as well.”

Through the partnership, Octopus is offering Sureserve Group’s drivers a bespoke domestic tariff which they can switch to if they choose.

“This will massively reduce not only the cost of charging the EV overnight, but all of their own electricity costs as well,” adds Williams.

“The device we’re installing allows the driver to plug in when they get home in the evening and set how much charge they need in that vehicle so they are ready for the next day.

“The device automatically identifies the cheapest or best time to pull that energy from the grid.”

Drivers not out of pocket

“The line-by-line transactions mean, through the dashboard, we can monitor our savings, usage and efficiencies, while we are also able to compare what the journeys would cost in ICE (internal combustion engine) vehicles so you can compare the savings and the efficiencies of running EVs.”

“The feedback we receive from the drivers is sent back to Octopus and to myself to review and any actions are dealt with,” says Williams.

“So far, the feedback from the drivers both on the cars and commercials has been really positive.”

To help smooth the transition to EVs, Sureserve Group has introduced an online driver training course focusing on the technology through its internal Sureserve Group Academy, which holds internal training on topics such as manual handling and health and safety.

The new course gives employees an overview of the technology, best practice advice on areas such as efficient driving, charging and the Electric Juice Network.

It also outlines the difference between driving an ICE vehicle and an EV, such as the automatic gearbox, different instrument panels and charging infrastructure.