Overcoming the obstacles to ULEV take-up 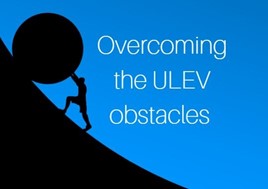 Organisations wanting to add electric vehicles to their fleets have traditionally faced many barriers, but these are being solved. Andrew Ryan reports

Expectations for rapid and widespread ultra-low emission vehicle (ULEV) adoption are high, with some industry experts predicting there will be 15 million on UK roads by 2035.

This is a far cry from the 160,000 which are currently registered, with fleets expected to be the biggest driver of this massive increase.

However, both organisations and private motorists are taking on ULEVs in record numbers, with Society of Motor Manufacturer and Traders (SMMT) figures showing that in June there was a 45% year-on-year increase in registrations to 15,549 (6.6% of the market).

“Over the past five years, we’ve seen a real mindset shift in attitudes towards electric vehicles (EVs),” says Kit Wisdom, head of technical services at Alphabet which, according to last year’s FN50, was the leasing company with the highest proportion of pure EVs on its risk fleet. It now has more than 10,000 EVs and hybrids and, by this May, electrified vehicles made up 11% of its new vehicle deliveries.

“With EVs and plug-in hybrid electric vehicles (PHEVs) at 8% of our portfolio even for a business as supportive of electric vehicles as Alphabet, there are still some significant barriers and challenges,” says Wisdom.

Here industry experts look at some of those obstacles and how they are being overcome.

In the not-too-distant past, a lack of options restricted the appeal of ULEVs for the vast majority of fleets.

However, the number and capability of ULEVs has increased significantly since – there will be more than 180 models available later this year, says the EST, encapsulating almost all body styles.

This number will continue to rise, says Paul Gambrell, transport consultant at EST.

“We are about to see a huge explosion in the number of ULEVs out there, whether they are fully electric, plug-in hybrid or range-extenders,” he adds. “The big driver is that car manufacturers have got to meet EU emissions targets for their vehicles: by 2021 their average CO2 for the range of vehicles they sell has got to be 95g/km or below, otherwise they will be fined heavily.”

The driving range of pure EVs has also increased significantly. For example, when the Nissan Leaf was launched in 2011, it had an official range of 109 miles from its 24kWh battery. In comparison, the latest Leaf, launched this year, has a 40kWh battery and a range of 235 miles.

PHEVs and extended range electric vehicles are also available, which combine a petrol or diesel engine with an electric powertrain to enable them to travel further without charging.

Tax and grants have been among the biggest factors which influence company car and van choices.

The Government currently offers a number of financial incentives to stimulate uptake of ULEVs, including favourable benefit-in-kind (BIK) tax bandings.

However, it has not yet announced BIK rates for any cars beyond April 2021, creating uncertainty for any organisation or driver looking to change vehicles, says Wisdom from Alphabet.

“At the time when EVs really need BIK tax support to take off, it’s not happening until April 2020 – hence industry is pushing hard to pull this forward or stagger it to incentivise EV take-up.

“Plus we’re still awaiting the decision from HMRC to recognise electricity as a fuel for mileage rates as it does for petrol and diesel.”

This situation has also been recognised by fleet operators’ association ACFO, which has launched an online petition calling for advisory fuel rates (AFRs) to be introduced for plug-in cars.

Grants towards the purchase of EVs and the installation of charge points at home or at the workplace are available to both organisations and the public through OLEV (the Office for Low Emission Vehicles).

They run until October in their current form, although the Government has stated they will be under constant review and will ‘continue in some form’ until at least 2020.

Under the Workplace Charging Scheme, organisations can receive £300 towards the cost of installing a charge point, up to a maximum of 20 sockets. The Government, in its Road to Zero strategy released earlier this month, has proposed increasing this grant level to a maximum of £500 per socket.

The Electric Vehicle Homecharge Scheme provides grant funding of up to 75% (to a maximum of £500) towards the cost of installing charge points at domestic properties.

While these measures can encourage take-up of ULEVs, the stop-start nature of much of this funding is not helping longer-term planning, warns Tim Schwanen, associate professor in transport studies and director of the transport studies unit at the University of Oxford.

“Funding is often short-term, programmes are regularly abandoned or replaced by the time teething problems have been addressed, although at the moment we are seeing more stability in the EV funding landscape than we did a couple of years ago,” he says.

“This is deeply problematic when we are talking about long-term transitions and attempts to accelerate them.”

Some of the biggest hurdles for ULEVs to overcome involves the charging infrastructure.

Many of these are based around the still-developing technology and network, others relate to misperceptions.

For example, a survey by The AA earlier this month reported that 85% of respondents said there are not enough public charge points.

However, according to the Office for Low Emission Vehicles (OLEV), there are currently around 12,500 publicly-available charge points in the UK, about 1,000 of which are rapid chargers. A further 90,000 chargers have been installed at people’s homes.

“There is about one charger for every 12 cars at present,” says Steve Ives, head of competitions at OLEV. “So, we are not in a bad place, but there is still an awfully long way to go.”

Around 340 charge points are being installed every month, while the infrastructure has also received a major boost from major petroleum companies investing heavily in the sector.

These purchases will also help to address another deterrent to fleets adopting ULEVs: the time it takes to charge a vehicle.

In 2010, charge points were rated at less than 3kW, and it would take 12 hours to put 80 miles-worth of charge into a vehicle.

More powerful charge points are continually being introduced and the BP deal will see it roll-out a network of ultra-fast chargers across its 1,200 UK service stations. These 150kW chargers will be capable of delivering 100 miles of range in 10 minutes.

Another concern has been that widespread adoption of ULEVs would cause power shortages as the electricity grid would not be able to cope with the increased demand from mass charging.

However, this can be avoided through the use of smart charging, where software monitors and manages the power needed to charge vehicles to ensure the demand for electricity does not exceed the supply.

“It is easy to look at a business and say ‘ok, we need 10, 20 or 30 chargers and we want them all to run at max’, but that’s not really the case,” says Nick Chambers, business unit general manager – electrical contracting and electric vehicle charging infrastructure at Actemium.

“At the workplace, people may be there for the whole day, or through the night, whatever shift pattern they are on.

“They haven’t got to be charged in an hour and gone, vehicles can be trickle charged through eight hours, which means deploying lower power across a third of the network.”

The growth of vehicle-to-grid (V2G) and battery storage infrastructure will also flatten out the increased demand on the grid, as digital algorithms will be used to charge and release energy from storage at the most cost-effective time.

The National Grid expects these will play a major role in shaping the energy system by the end of the next decade.

The salary sacrifice changes have had little impact on Leicester City Council’s scheme who see the changes and omission of ULEVs as an opportunity.

Alphabet has revealed that it delivered 8.9% of the UK’s total number of ULEVs in 2017.