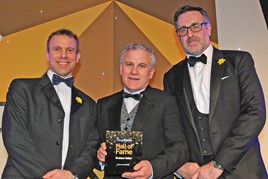 Graham Telfer’s immediate reaction to becoming the 30th inductee into the Fleet News Hall of Fame was typically humble and unassuming.

“I’m absolutely stunned,” he said in an interview minutes after the announcement at the Fleet News Awards in March. “The previous 29 inductees, I just can’t believe I’m sharing the same podium as them.

“They’re absolutely fantastic, they’ve been real movers and shakers in the industry, and for someone from a small fleet to be involved in that, I’m absolutely overwhelmed.”

However, the softly-spoken Gateshead Council fleet manager, who has a diverse fleet of 500 vehicles including cars, vans, 30-tonne refuse trucks and 20-tonne gritting vehicles, has had plenty to shout about since being appointed to his role 18 years ago.

He has consistently been one of the most pioneering fleet managers in the country, taking a lead role in the development of alternative fuel and electric vehicle (EV) technology, driving improved safety and tackling the grey fleet, as well as being keen to collaborate and share best practice and experiences with peers and industry bodies.

“We’ve always tried to be innovators,” says Telfer, who has been an advisory panel member on the Department for Transport’s Low Carbon Vehicle Partnership (LCVP) since its inception in 2003.

“At the beginning, it is very easy to let other people do the work on new technologies or initiatives. So, do you sit back and wait for things to happen, or do you get involved?

“I chose to get involved as did some other fleet managers and I’ve made some very close associations over the years with people such as Norman Harding (fleet manager at Hackney Council) and Paul Gatti (now director of fleet at Royal Mail) through LCVP.

“We were there at the programme’s birth and we went through various different vehicles that have fallen by the wayside, not necessarily because they were a poor product, but maybe through a lack of funding as the business cases didn’t stack up.”

Gateshead Council pioneered the use of biodiesel in the mid-1990s, including an 80/20 blend, and has also used LPG and CNG.

While the market has recently shifted towards adopting EVs, Gateshead Council was well ahead of the trend there as it looked to find ways to reduce emissions.

“We are now in a place where all of the hard work (to develop EVs) has been done,” says Telfer. “It’s easy to go out and buy an electric vehicle now, but 15 years ago this wasn’t happening.

“When we were the pioneers of introducing EVs or looking at alternative fuels it was a cottage industry: there was a lot of seed funding to a number of small companies.

“We worked with universities and colleges to develop drivetrains for EVs. They would take a vehicle from the factory, strip out all the running gear, and we would be at the birth of that to develop what we needed, what range we would be looking at.

“Initially the EVs would use lead acid batteries that could do 30 miles, 40 miles maximum, and we would go out and test them around Gateshead. Within about 15 miles they were no use whatsoever, but EV technology had to start somewhere.”

Gateshead Council was also involved with Amberjac Projects, which saw the Grantham-based company add a battery to a 2006 Toyota Prius hybrid, turning it into a plug-in hybrid.

“Within, I would say, less than two years of the start of LCVP, manufacturers got on board with EVs and they kind of superseded that development programme, but we – and the rest of the UK – are now reaping the benefits of the work we did,” adds Telfer.

“Within 24 months, we took on some Mitsubishi iMievs and we are still running three of them today. We’ve got one here now. It’s battle-scarred, it’s 10 years old, but it has never let us down and the range is the same as we were getting at the start (60 miles).”

Its pioneering work with EVs has also extended to the charging infrastructure, and the council helped install 30 charge points in Newcastle and Gateshead in 2008/09.

“We had to decide where to put them, but we didn’t know where anybody was going to operate from,” says Telfer. 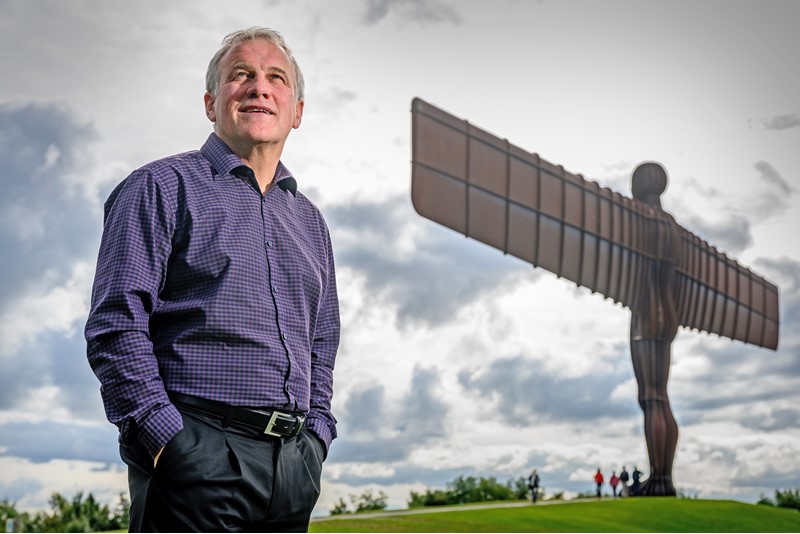 “Japan was very innovative and just filled Tokyo with charging points to make the technology acceptable, so we decided to put them in the most highly visible sites in Newcastle city centre, near the Angel of the North in Gateshead, around leisure centres and venues.

“We were also the first local authority to install a fast charging point, just outside the Gateshead International Stadium.

“Whether they were used or not was another matter, but we had to get the visibility because, even today, that’s the Achilles’ heel of the EV infrastructure.”

The fleet department has also been instrumental in the installation of a three-bay canopy solar-powered charging station at Gateshead Civic Centre.

Telfer is a firm advocate of the benefits of working with organisations and his peers.

On top of his involvement in LCVP, he is a panel member of the Driving for Better Business programme, in which he contributes to policies and procedures, while he directly shares his experiences with other fleet decision-makers as a regular attendee of Fleet News roundtables.

“I just feel that it is an essential part of the personality to want to share the information you have,” says Telfer.

“I’ve been very proud of some of the things we’ve done with Brake and the opportunity to work with Fleet News in particular, and they’ve been a great resource as well.

“Some of the ideas that you’ve had, you think, ‘well, they’re quite innovative’ but so are those from other people you meet, and everyone can help each other.”

Telfer’s involvement with Brake has helped him focus on another area close to his heart: safety.

“We’ve had incidents here, which every transport operator has, and while bent metal can be an easy thing to repair, the actual fall-out of the impact the injuries has to a person is far greater,” he says.

“It is essential we address that and use every tool we can to minimise the chances of a road collision or an injury to a member of staff.”

After launching an occupational road risk policy, Telfer introduced a range of initiatives to support this, covering alcohol and drugs, mobile phone use, fitness to drive, incident reporting schemes, licence checking and personal safety. Younger drivers are a particular focus.

“Safety is embedded throughout the organisation,” says Telfer. “The desire is to make everyone as safe as absolutely possible.

“The analogy I use is that when our building site guys work on a construction site, they must have hi-vis, boots, headwear and go through a full process before they can work on scaffolding, and they are not allowed to skew that.

“I apply that to driving. Someone wouldn’t turn up on a building site without a hard hat, so why would someone who drives start the day without doing a vehicle check?”

Gateshead Council employs four driver assessors and they use a matrix to assess employees similar to that used by the Driver and Vehicle Standards Agency in its national standard.

All drivers have to meet its requirements, while they also undergo annual classroom-based driver training.

Monthly toolbox talks are used to remind drivers of their obligations and any updates, says Telfer, while individual driver profiles identify any issues that need to be addressed.

The assessors also have laptops so are able to carry out training via DVDs, while managers across the authority are able to stop and check vehicles for their condition and operational profile.

“There is no remuneration benefit or prize system for driving well because we just can’t do that, but we constantly reappraise,” says Telfer. “After an incident, a driver is never just allowed to walk away, they have to have a complete driver reassessment to review how the incident happened, so it is a complete process in itself.”

These measures have helped to more than halve the accident rates over the past decade to 11% last year, despite the introduction of a more robust reporting system.

Telfer has also made reducing the grey fleet – people using their own cars for business journeys – a key priority and has seen mileage fall by 50,000 a year: a 25% drop.

“You’ll never eliminate it and I’ve come across a number of managers whose businesses survive on grey fleet. That’s all very well, but it needs to be managed,” he says.

“The managers I’ve met do that robustly. However, what we initially did in Gateshead was make managers review how staff attended meetings.

“Was there actually a need to drive? Our policy has evolved from getting people out of the car and getting them to use a telephone, Skype, or teleconferencing.”

Gateshead Council has a pass available for anybody who needs to use the town’s Metro system, while it also has 25 pool cars based at the Civic Centre. These are available for the public to use out of office hours via the Co-Wheels car-sharing scheme.

The local authority also encourages employees to use one its fleet of bikes or e-bikes, as well as walk between sites if possible.

“We’ve never just gone for one fix, it has to be a whole gamut of things, with using a grey fleet vehicle as a last resort,” says Telfer.

This willingness to trial and adopt new initiatives before they become part of the mainstream perfectly typifies Telfer’s approach to fleet management.

“There have got to be some people who want to make a change and with transport, whether it’s mechanical, associated with safety or reducing fleet mileage, that’s something I’ve always been interested in.”

A life in automotive 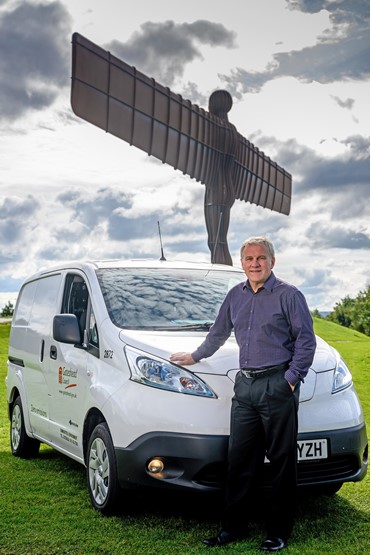 Graham Telfer’s interest and enthusiasm for all things automotive began when young.

“When I was a young teenager we used to have motorbikes and ride on local off road areas on farms, and I was also involved in the scouts and they had motor vehicles we could actually drive off the road, and it all began from there,” says Telfer.

After school, he began his career as an engineering apprentice at an independent bus company, before moving on to an Opel dealer, where he was involved in the Dealer Opel rally team, helping to maintain the race cars.

Cost-saving is one of Graham Telfer’s priorities as austerity continues to affect public sector organisations.

“The cost-cutting across the public sector has been brutal, for want of a better word,” he says.

“Our budgets are constantly reviewed and we are extending the life of some vehicles simply because of budget.

“We used to be five-to-seven years, now we are seven-to-nine on some refuse collection vehicles (RCVs) and we are fitting regeneration traps on some of the older RCVs because it’s important that the fleet is compliant to meet our air quality targets.”

Austerity has also affected the speed with which public sector organisations have been able to adopt EVs.

“The funding that was around earlier would have made the transition to EVs much easier, and all the public sector which have been involved in EV programmes should be commended for staying with them,” adds Telfer.