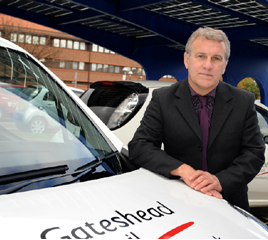 The 2019 inductee into the Fleet News Hall of Fame has long been a pioneer of low emission and safety initiatives.

Long before air quality hit the headlines, he was trialling electric vehicles. As far back as the 1990s, his fleet was running vehicles on biodiesel and liquefied petroleum gas.

And he continues to monitor and trial new and emerging technologies in a never-ending search for carbon reduction and minimisation.

His career in fleet started back in 1974 as an apprentice at the National Bus Company. Over the years, he built up substantial knowledge in fleet working, among other jobs, at the Opel franchised dealer in Newcastle.

During almost 30 years with his local authority, he’s been no stranger to awards ceremonies, collecting trophies from Fleet News, Brake, Commercial Fleet and Energy Saving Trust, among many others.

He’s seen numerous changes to the way fleet is managed.

The early days saw the use of rotadex flip files and thousands of coloured squares to detail service interviews, while the first computers were view-only for vehicle data. To interrogate it you had to write your own programme!

But more than that, he shares his experiences with other fleets - directly, through Driving for Better Business and via Fleet News roundtable discussions.

He is also an advisory panel member on the Department for Transport’s Low Carbon Vehicle Procurement Programme.

His mission, is to engage the wider business community in safer and cleaner driving.

“My role,” he says, “is to work with the public in both an advisory and partnership role.”

Away from fleet, our new inductee enjoys mountain climbing, cheering on Newcastle United on the rare occasion there’s something to cheer, and caring for his beloved Dolomite Sprint.

He becomes the 30th person to enter the Fleet News Hall of Fame.

Award sponsored by The AA