Paul Gatti juggles the ‘big numbers’ as he identifies new ways to save and make money, including opening his workshops to third parties. Matt de Prez reports.

Royal Mail has a unique set of challenges.

Europe’s biggest and most recognisable fleet – more than 46,000 vehicles emblazoned in iconic red with the brand’s golden logo – is required to collect mail from 115,000 postboxes and deliver to 29 million addresses six days a week.

At this scale, anything the organisation can do to save money will have a significant impact on the bottom line. 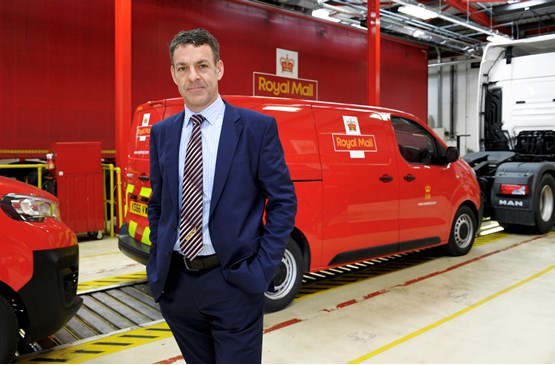 Consequently, its preventative maintenance programme, which has delivered a 26% improvement for mean time between failures, resulting in a 3% reduction in total workshop visits, was a no-brainer for the 2017 Fleet News Award for Best Cost Saving Initiative. It’s the second consecutive year Royal Mail has collected this trophy.

On average, a Royal Mail vehicle now visits the workshop six times per year instead of eight, freeing up valuable time and space.

This was achieved despite the significant cultural shift which took place as Royal Mail opened its workshops’ doors to third-party customers for the first time.

Historically, the company’s 110 workshops were exclusively used to service and repair the ‘red fleet’, which has 37,900 vans and a combination of 7,300 trucks and trailers.

The workshops also service and maintain the company’s 1,600 company cars which are leased from Zenith and managed by Royal Mail’s HR team.

“Now we are moving towards a commercial environment, we need to treat our internal colleagues as a customer in the same way we treat our external customers,” says Paul Gatti, director at Royal Mail Fleet.

“There is a whole culture change going on in fleet. We are getting some early positive feedback. There are a few challenges, as you’d expect, but we are early on in the journey.”

The new revenue stream required Gatti and his team to really “sweat the asset” – that is, their workshops – fully utilising the existing 1,000 Royal Mail workshop technicians.

“We have been able to absorb the work this year but there comes a point where you do have to expand and put more boots on the ground,” Gatti says.

As Gatti’s “customer”, Royal Mail distribution director Wayne Jay said the increasing amount of external work had been a concern for him and his team. However, in reality, those concerns haven’t materialised.

He confirms: “It has been smooth. It is about having that collaborative relationship. You cannot be complacent, this is a commercial venture for us and we have got to work collaboratively.”

Jay looks after Royal Mail’s trucks and larger vehicles. He’s responsible for 7,000 people working in the distribution side of the business, which includes 6,500 drivers.

“The criticality of fleet and fleet performance, for us, hinges on the wider pipeline of what we do, which is an integrated network that I lead involving road, rail, air and sea. Getting the fleet right is essential.”

Any unplanned downtime or vehicle failure can have a significant impact on Royal Mail’s delivery schedules as the entire operation relies on split-second timing to run smoothly.

“The quandary is when two vans turn up in the workshop: a red one and a blue one. Which one gets fixed first? Well it’s the one that was booked in,” says Gatti.

Jay adds: “Historically, I used to send stuff to Paul and expect it to get turned around as quickly as it could be, as we were the only customer and the only priority.

“Now I have to realise Paul has a schedule and I have to fit into that schedule.” 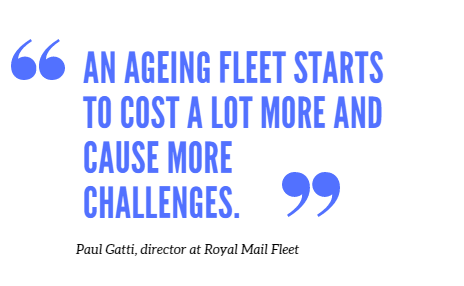 One of the innovations Royal Mail Fleet is now implementing is a new planning and booking system. It loads the workshop based on scheduled visits for trucks and vans then allows third party work to be added to the schedule by a central booking desk.

“Everybody will be able to see the plan, it makes the workshops transparent. Currently we have a plan but it tends to be given to the workshop and managed by the workshop. This new system will give us a far smoother and more productive process,” Gatti says.

Gatti says: “The challenge I put on the people who drive the vehicles is: look after them and drive them more carefully. Then they won’t have to come in as frequently and I will be able to get some more headroom to bring in more external work.”

Royal Mail’s driver improvement programme has enabled it to reduce collisions by 23% over the past two years. It saves the business millions of pounds in downtime and third party costs and is a constant point of focus. 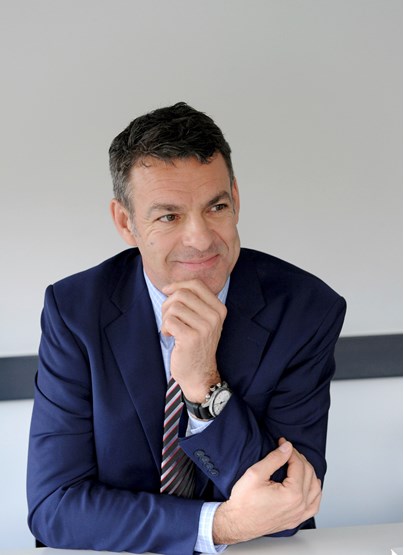 To promote safe and efficient driving, and minimise vehicle wear and tear, 100 Royal Mail employees have been trained as driver coaches.

Jay says: “They support actively our drivers out on the road. We’ve seen improvements in all our metrics – idling, harsh braking and fuel efficiency.”

Telematics data is analysed on a shift-by-shift basis in order to manage performance. Any driver that repeatedly gets low scores will spend time with a coach to learn new techniques.

The company also has a career pathway, which offers unqualified people the opportunity to become trained as a driver.

“In the competitive and exposed market, people with the right skills and qualification are hard to find,” says Jay.

“When you start from scratch with someone you can support their thinking, not only with the technical bits but with the criticality of what they do and how they do it.”

As the metrics continue to improve, the business is benefitting from increased efficiency and fewer faults.

Availability is one of the most important factors to Royal Mail and Jay relies on Gatti to ensure the right vehicles are always in the right place. 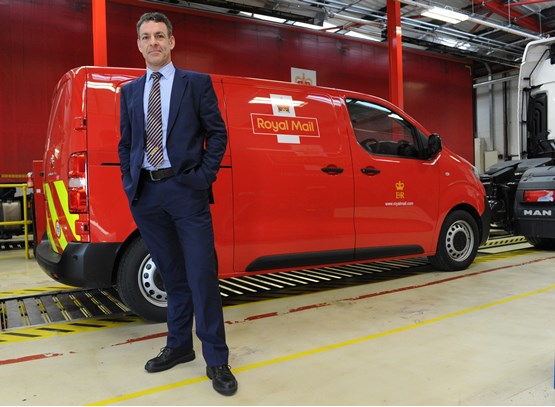 Gatti says: “We have to make sure the trucks and trailers are available when Wayne needs them.

“Our big shops are open 24 hours per day because Wayne has a 24-hour operation. We need to be maintaining the fleet at the quieter times to minimise the number of reserves and spare vehicles we hold. That can be a logistical exercise.”

Many of the cost-saving initiatives that led to the business picking up the Fleet News Award were introduced predominantly to help fund the red fleet.

By extending the life of vehicles and performing smarter, preventative maintenance Royal Mail was able to reduce its capital spend on maintenance and use the money to fund new vehicles.

“An ageing fleet starts to cost a lot more and cause more challenges. Bigger trucks tend to break down more frequently, so we have been able to guide more finance to buy more trucks and trailers,” Gatti says.

By implementing a new asset management system, Royal Mail is now able to monitor the lifecycles of its vehicles. It takes into account maintenance data, environmental data and buying data from the past 15 years then works out which vehicles should be replaced and when.

“We might buy 100 vehicles and keep them for five years but actually sell them after three because the market tells us it is the optimum time to sell for residual values,” explains Gatti. 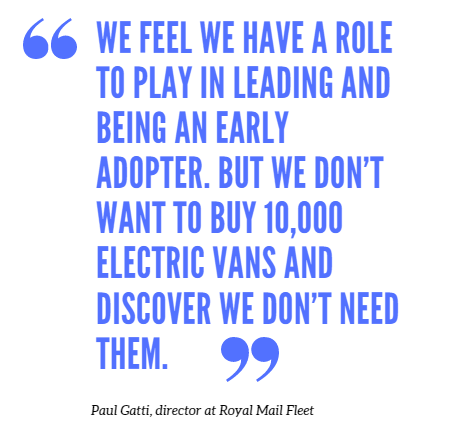 The company has also switched to a “green parts project” which sees end-of-life vehicles sent to a reclamation agent who removes all the usable parts and sells them back to Royal Mail.

According to Gatti the arrangement has already saved the business more than £500,000.

Further savings have been made by putting more focus on warranty.

Although many of the company’s vehicles are out of warranty, by focusing workshops on claiming what they can, the business has trebled its warranty recovery – bringing in £340,000 per month.

“Where we are different from some is our universal service. We need to go into those city centres every day,” Paul Gatti says.

The business has shifted towards buying Euro 6 diesel and petrol vans, but fears they will only be compliant for a limited period.

Currently, 15% of the fleet is Euro 6, which should reach 20% by the end of the year. At current replacement cycles, Gatti believes it would take five years to replace the entire fleet with Euro 6 vehicles.

It has 100 electric vans on trial, across 12 depots, and an electric truck – with plans to take eight more. “It’s an interesting dynamic. EVs don’t get bang for buck in cities, as they do such low mileage. Plus, we aren’t paying any extra charges yet,” says Gatti.

He believes the biggest challenge is infrastructure. “Getting charging points for those 100 electric vehicles isn’t cheap,” he says.

“Sure, there are grants. But they are reliant on you giving access to the general public – that is not always conducive to our yards as there are security implications.”

The company is also trialling gas-powered trucks and a hybrid van.

“We are developing a strategy but it’s difficult as we don’t know what the legislation impacts are going to be – it could all be turned on its head,” Gatti says.

“We feel we have a role to play in leading and being an early adopter. But we don’t want to buy 10,000 electric vans and discover we don’t need them.”

In the past it would buy new ones before the peak and hold on to its old ones until after. Now it uses flexi-hire, often leasing used vehicles it sold back to the manufacturer.

“Now we have a pool of vehicles we can call on when we need them, but we don’t pay to hold them or maintain them,” Paul Gatti explains.

All the vehicles are bought using company capital with around a quarter owned outright. The rest are on sale and leaseback while all trailers are on an operating lease.

“We looked at operating lease on other vehicles, but it doesn’t quite work out for us,” says Gatti.

The company often runs vehicles for seven-10 years but the fleet size can change weekly.

As some operators look to downsize their vehicle sizes, Royal Mail’s are getting larger.

“People are buying more online so we carry more parcels than letters and more multiple orders are fulfilled in one delivery – that drives the cubic size in vans and trucks,” explains Wayne Jay.

Its car-derived vans are being replaced with panel vans and double-deck trailers now make up more than 50% of the total.

‘Training is a real cornerstone for us', says Royal Mail

Narrowing down 120 driver training courses into three has paid big dividends for Royal Mail with the number of collisions in a year reduced by 12.3%. Andrew Ryan reports