Hyundai: ‘Our products are as good as anything on the market’ 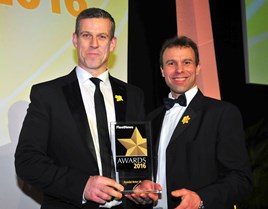 It is a performance which was reflected in this year’s Fleet News Awards, where the i10 retained its title of best city car and where – after three consecutive years of being highly commended – it finally took the honours in the most improved manufacturer category.

It is this all-round focus on its wider offering which has helped Hyundai continue its sales success, but Martin Wilson, sales director at Hyundai, feels the manufacturer’s product range has taken the starring role.

“I firmly believe our products are as good as anything on the market and better than some,” he says.

“This has helped us increasingly become a much more acceptable and trusted fleet brand throughout the different sectors.

“The most encouraging areas are the penetration into the end-user and leasing sectors, where our products are being very well received.”

Hyundai’s fleet department has been through some recent changes. As part of a senior management reshuffle in February, Wilson, who had been fleet director for three years, became the brand’s sales director, with former sales director Guy Pigounakis taking over the fleet role.  Both report to CEO Tony Whitehorn.

During 2015, the company also developed a number of new fleet roles. These included a rental and Motability manager to enable the business to provide a specific focus on these areas. This allows the national fleet sales manager to concentrate on customer and dealer development. An existing role was also developed to create a remarketing manager, providing a dedicated resource in order to protect and further improve residual values.

Wilson adds: “We are now competing against the big manufacturers. They’ve had that legacy of tens of years of fleet contact, so we needed to catch up with them and we’re doing it.

“We are really proud of what we’re doing. We just need to keep it up.”

Fleet News: How are you looking to build on the success of last year?

Guy Pigounakis: We have a new marketing team, by and large, which is very focused on raising the profile of Hyundai in the fleet market.

We also have to make sure that we properly engage our dealer partners because, at the end of the day, that can be another 160 voices talking for us in local markets across the country. I think this is an area most OEMs struggle with to a certain extent, but it is one that is absolutely going to be at the centre of our strategy.

Of the percentage of our mix of sales, I would say that our volume in fleet will remain largely static, therefore you won’t necessarily see double-digit growth again. If we can achieve double-digit growth this year in the channels we want to, then we will, but it’s about getting the right mix of business, which is more important than just trying to drive volume for the sake of volume.

Motability is one of the very few channels in the market which is discrete and represents genuine volume opportunities. Also, it doesn’t damage the brand in any way. It is being exploited very effectively by some of our competitors and we want to have a serious look at how we can increase our share of the market.

Martin Wilson:  We’ve had a couple of big business wins with real blue chip companies. For example, we’ve taken orders from Foxtons, the big estate agents, for everything from Genesis to i10s. This means we are getting the kudos that comes with dealing with companies which are being courted by everyone.

FN: Tucson has become Hyundai’s fastest-selling model ever in the UK since its launch in September. Has this had a wider impact than purely volume?

MW: Tucson is seen as a hugely desirable car that end-user customers are actually speaking to leasing companies and saying ‘we want to try that car’. I think Tucson is our first ever car that has really sparked that interest to get customers to push towards us rather than for us to pull customers in. We have been slightly constrained by supply which has shown us that there is strong initial demand, plus it means residual values have been protected. That’s had a huge benefit for us because it means we have leasing companies that are desperate to engage and have more Hyundai product on their fleet.

GP: Tucson has had a massive impact in Motability and there’s no reason we shouldn’t be able to build on that.

FN: After its launch in September, Ioniq will become the first model to be available in a hybrid, fully-electric and plug-in hybrid versions (plug-in versions will be available next year). How important will this model be to Hyundai in the fleet sector?

GP: Between fuel cell, in which we are the sector leaders, and with our hybrids and EVs, we will have a full range of quite startling vehicles that will perhaps appeal to certain fleets that haven’t hitherto considered us.

MW: Ioniq opens up huge opportunities in every sector. First and foremost it is the public sector that wants to talk to us, but there is a huge array of other business sectors that will also be keen to talk to us, and it gives us something new to talk to prospects about. It’s really powerful stuff.

FN: Does Hyundai still have work to do to improve perception of its brand?

GP: We are increasingly well known, but I’m not sure we are wholly understood. Cars like Ioniq which is due later in the year will have a huge benefit for us.

We all know the volume of hybrids and electric vehicles isn’t massive, but Hyundai is really making a statement with this technology. I think everybody is familiar with Hyundai, but they don’t really understand the breadth of product and the proposition that we have, and this is a good opportunity for us to build on that.

MW: When customers speak to us about our brand, they can’t believe how much we have developed in the past four or five years.

The i10, i20 and Tucson were all launched with class-leading residuals and that one statistic speaks volumes as to how we’ve come on as a brand – five years ago you would have said that this would never have happened. However, my firm belief is that we still have a lot to do to make sure people understand our brand.

Hyundai operates a fleet aftersales charter which offers guaranteed levels of service to its business customers, and Wilson says this will continue to be an important part of its offering.

“We have to keep working with our dealer network and it has to keep coming with us,” he adds.

“Every manufacturer will have a certain amount of leakage for servicing outside their networks, with some people going to independents instead, but we’ve got to drive that down.

“To do that we have to demonstrate why it is beneficial for them to come and work with Hyundai, and that is why we have a very clear fleet aftersales charter that all our dealers have bought into.

“It lets customers know exactly what to expect and that’s what we’ve got to do more of.”