Freedom Group: 'It doesn't have to be like this,' says Paul Brown

Freedom Group is avoiding early termination costs of around £50,000 per year after switching its entire light commercial fleet to flexi-rent.

As a specialist contractor to utility companies, Freedom’s contracts can often last three-to-four years, which meant leasing was deemed the best acquisition method for its 300-strong van fleet.

However, head of group fleet Paul Brown told Fleet News that the requirements of a contract can change partway through, which can require a new set of vehicles or even their early termination. 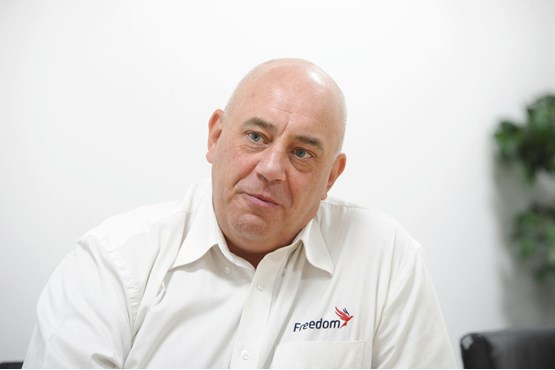 But, with no room for manoeuvre in contract hire or lease agreements the group faced costly early termination penalties if vehicles needed to be returned.

Historically, Freedom Group had seen Northgate Vehicle Hire as a short-term vehicle solution only, believing it did not have the resource, infrastructure and buying power to sustain its flexible offer at an affordable price over the long term.

However, after carrying out a full tender process, Brown says it became clear the rental company could offer the same vehicles at the same price and with the same kit as contract hire and leasing suppliers, but with the added benefit of flexibility.

He explains: “If I want to send back 20 flat-bed Transits and replace them with 20 box Lutons, Northgate don’t see it as being stuck with the asset, whereas for a leasing company it’s just seen as dead metal.”

Furthermore, if a contract became bigger and new vehicles were required at short notice, Brown says that was unachievable with other suppliers, while Northgate’s flexibility meant the right van, with the right kit, could be provided quickly, with no upfront deposit.

Vans are still deployed on a four-year replacement cycle, but Brown has struck a deal with Northgate whereby there is 20% flexibility in the fleet meaning up to a fifth of vehicles could be terminated early without Freedom facing early termination fees.

Freedom typically terminates 25 vehicles a year so avoids these charges.

Brown says: “It’s worked really well, from the speed of getting the vehicles and kitting them out, to their management, service and maintenance; it’s also not as if it’s any dearer.”

However, there can be a cost if you send vehicles back early.

“You have to return the vehicle in rentable condition if terminated in the first year, which is a lot different to getting it to an auction retail standard,” he says.

“But the longer you keep them, those costs will fall as they’re not being returned to Northgate’s rental fleet.”

Early termination fees may have been tackled by Brown, but the uncertainty of damage recharges remains.

They are a frustration for fleets of all sizes, he says, providing uncertainty for the financial director and fraying relationships with vehicle suppliers.

“It doesn’t have to be like this,” he says. “Fleets are sick of doing this dance every four or five years. 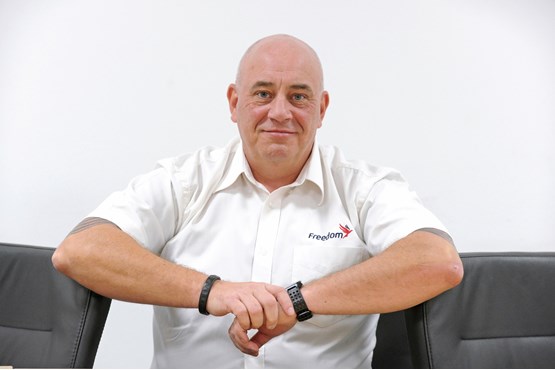 "We know what it’s going to cost per vehicle, why can’t we just put a few quid a month on top of the rental at the start of the contract?

"Build potential damage recharges into the lease costs and then, in four years’ time, there are no nasty surprises.”

Brown believes data on end of contract costs could be used to establish an industry-by-industry charge, with a per vehicle premium included from day one of the contract.

“In the end, leasing companies will realise it’s the best way of doing business,” he says.

Another area where Brown has succeeded in keeping Freedom Group’s fleet costs in check is fuel spend. A £3 million fuel bill in 2013-14 has fallen by a third to £2m.

That saving has been achieved by adopting more fuel-efficient vehicles and by reducing engine sizes without any operational impact.

Since then, it has achieved a further £75,000 saving aided by telematics, but doesn’t anticipate any more reductions.

Driver league tables allow peer pressure to be applied and a desire to be the best driver.

Not only has this encouraged safer, more environmentally friendly and cost-effective driving techniques within the team, it has also boosted employee engagement and morale.

Furthermore, it has helped reduce the frequency of repairs and replacement parts due to poor driving. Freedom Group estimates savings here to be worth a further £20,000 per year.

Fuel data reports have also been closely monitored to look at any irregular purchases, or purchases on high cost versus power type fuels. 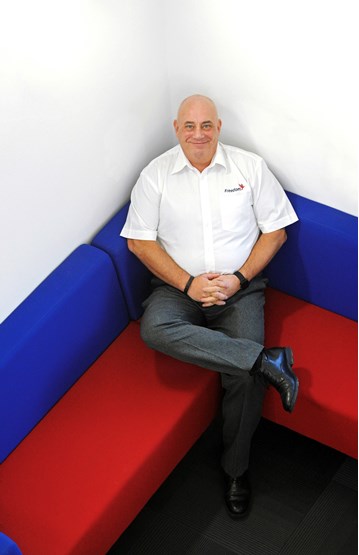 Technology will be key

Brown has made substantial improvements to the fleet since joining Freedom almost four-and-a-half years ago, but he has no intention of resting on his laurels.

The fleet is up for renewal this year and technology will be key, he says, with stop-start engines one of a range of measures under consideration to help continue keeping fuel costs in check.

However, he admits it is likely that diesel will remain the group’s fuel of choice for the immediate future.

“We looked at petrol cars rather than diesel, but when they’re doing 25,000 miles per year it just wasn’t practical,” he says.

“EVs are not a practical solution yet either and petrol hybrids would have increased our fuel costs by a third.”

Plug-in powertrain technology, it seems, still has a long way to go before it will be considered the right fit for Freedom Group’s fleet of vehicles. 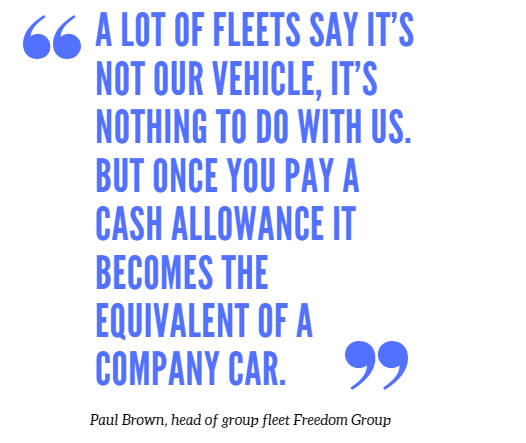 A plethora of deals available for people via personal leasing has helped fuel growth in the number of employees choosing cash over a company car.

Freedom Group operates a car fleet of around 125 vehicles, but Brown told Fleet News that cash-takers have now overtaken company car drivers for the first time.

“We’ve got around 150 members of staff opting for the car allowance,” says Brown.

“There are two main reasons for that; the main one being the 9p per mile we pay for company cars.”

The vast majority of cars are job need and in an effort to drive down fuel costs, smaller, more fuel-efficient engines have been chosen, resulting in the 9ppm rate. That compares to a grey fleet rate of 25ppm.

“The other reason is probably the option of cars we give them,” he says. 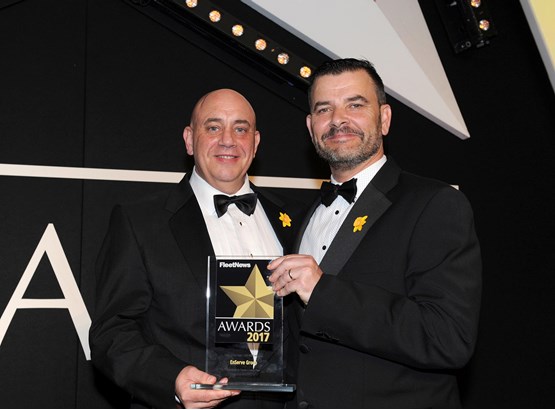 Freedom Group has secured a solus deal with Volkswagen for its car fleet. Senior managers have access to a top of the range Volkswagen Passat, while the next level down, which is a field engineer, has the choice of a Volkswagen Golf hatch or estate.

Brown explains: “They are both great cars, but some people like a different badge and, if they want a BMW or a Mercedes-Benz, it’s another reason for them to opt out.”

Brown says Freedom struck a solus fleet deal, because it wanted to avoid having different cars from different suppliers.

“We give them four basic colours – black, white, silver or grey – standard black cloth interior and we give them all the options we think they’ll need, such as sat-nav and parking sensors,” explains Brown.

“Then if a car comes back it’s easy to issue as a replacement to somebody else.”

However, the popularity of a cash allowance does mean that managing the grey fleet has become a priority.

“You’ve got to have a single point of ownership on grey fleet,” says Brown.

“Should it be HR, the operations manager, payroll or fleet? It’s got to be somebody that’s strong enough and thick-skinned enough to actually manage it.

“A lot of fleets say it’s not our vehicle, it’s nothing to do with us. But once you pay a cash allowance it becomes the equivalent of a company car.”

Cash allowance cars have a five-year age limit on them, compared to the four-year cycle employed on company cars. Brown says the additional year helps employees offset extra costs such as insurance.

To qualify for the allowance, log books also have to be in the employee’s name, from which Brown says the group can ascertain the age of the vehicle and when the MOT is due.

All of this data is uploaded to Freedom Group’s fleet management system which will automatically flag up when renewals are required, with drivers sent an email requesting action be taken.

Brown says: “If it isn’t updated, we have the option of emailing payroll to suspend the car allowance. You usually find that within 48 hours they will supply the paperwork you were after.” 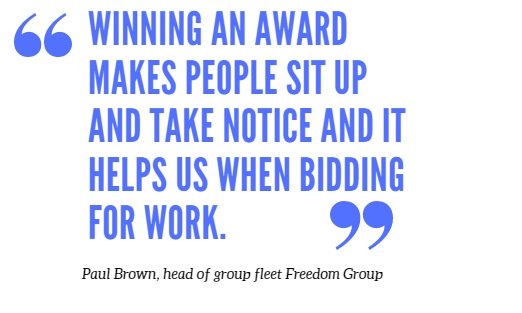 Awards get you noticed and help when bidding for new contracts

Awards success has given the fleet operation a much higher profile and helped Freedom Group win business, according to Paul Brown.

The awards judges said: “Brown shows a solid understanding of the fleet and has introduced a number of initiatives, which are robustly measured to display clear results. an extremely well-run operation.”

Success at the Fleet News Awards was followed by a Green Apple Award in recognition for environmental best practice and a ‘highly commended’ for Commercial Fleet of the Year – Utilities at the 2017 Commercial Fleet Awards.

Brown says: “Fleet has become more of a focus at boardroom level. A couple of years ago, they wanted three or four lines from me for a monthly report. Now they want three or four slides.

“Winning an award makes people sit up and take notice and it helps us when bidding for work.”

Monitoring its van fleet has enabled Enserve to reduce fuel expenditure, with another £60,000 saving expected this year. Christopher Smith reports

Paul Brown shows a solid understanding of the fleet and has introduced a number of new initiatives, which are robustly measured to display clear results. An extremely well-run operation.