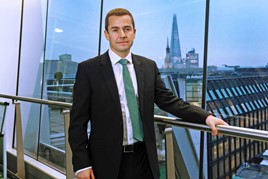 The lines between business leasing and personal leasing are blurring. Some of the UK’s biggest leasing companies have launched personal contract hire products to lure both employees of business customers who do not qualify for a company car and general members of the car-buying public.

In recognition of this growing cohesion, the biggest of them all, Lex Autolease, has gone a step further.

Following the retirement of Tim Porter last year, parent company Lloyds Banking Group has for the first time appointed a single managing director to oversee both its business and consumer vehicle finance divisions.

Richard Jones, already MD at Black Horse, duly took the reins at Lex Autolease in November. He had worked alongside Porter for almost four years and was already well-versed in the intricacies of business car finance.

“We found ourselves jointly looking at opportunities of commonality, such as fuel technology, digitisation of search and buying, and regulation,” he says.

“Then there were the internal challenges, such as investment in new technology and digitising our platforms. We saw an increasingly common agenda.”

In his first media interview since taking on the expanded role three months ago, Jones admits to still grappling with the full extent of the opportunities; it is, after all, new territory for the company. The benefits, he admits, “are many, but we’ve not figured them all out yet”.

“We need to look at how we bring together our teams to think about customers and their buying journeys, but there are immediate benefits on pricing and residual value risk,” he says. “We have a footprint with manufacturers, dealers and suppliers, we have a relationship through new cars, used cars and servicing, and we provide corporate and personal financing.

“So we can bring together relationships in a more composite way to develop partnerships across the automotive value chain. We can build a strategy for those markets as a single business.”

Harvesting data and pooling knowledge will provide additional benefits to fleets, such as tackling the growing issues of grey fleet as more perk car employees choose to opt out and take cash.

“We can bring them more solutions and make them more attractive as an employer. Personal leasing has a certain DNA and one thing I would like to do is to think about what individuals want to remain in a car scheme. It’s about making our offers more compelling in the long-term,” Jones explains.

“We also need to understand fleets’ needs for the future. We have to help them run their business in a more efficient way by understanding how their fleet is designed and how it is used.”

His appointment, described as “the most exciting challenge I’ve been lucky enough to take on”, comes near the start of the current Lex strategy cycle (2018-2021), which Porter outlined to Fleet News 18 months ago. The priority has shifted from one of substantial growth targets to one of sustainable growth, focusing on customer service, digital services and automation.

Porter’s 100,000 growth target was the right strategy for the business at that time, according to Jones, but success will now be defined by customer satisfaction and retention.

“If, in three years, I have a fleet size that is the same as today but I have better understanding and deeper relationships with those customers, then that’s as good as growing the fleet,” he says.

The scale of the business is breathtaking. Combined, Lex Autolease and Black Horse provides funding for 1.2 million vehicles; no one else comes close. It has relationships with every manufacturer for cars and vans.

That puts the company in a strong position as transport goes through its biggest and most fundamental evolution. Manufacturers are wrestling with challenges including connectivity, electrification and autonomy, which will facilitate integrated transport solutions.

“This is the scale of change that the sector has to adapt to within a 15-year timeframe when ICE (internal combustion engines) evolved over 100 years,” Jones says.

However, picking out the trends in the current climate is difficult with so much short-termism created by Brexit, the new WLTP fuel/emissions testing regime and uncertainty over BIK.

“We won’t see where the corporate market is going until the second half of the year, but I expect new cars to settle down and fleet to be at parity or slightly ahead of 2018,” Jones says.

However, he adds that “now’s not the time to place bets” when it comes to the future of mobility. Lex is keen to get involved with trials with fleets, manufacturers and new market entrants such as ride hail, although mobility as a service (MaaS) “looks tactical and there’s a lot of hype” at present.

“We have to understand the building blocks – connected, autonomy and electric – and we won’t get to maturity until there is progress on all three. We are probably 10 years from true MaaS but that doesn’t mean we shouldn’t pilot new ideas,” Jones says.

“But we have to be clear about our role: we are here to fund cars and give customers compelling propositions. That won’t change; there will still be a vehicle that needs funding.”

Subscription services could, he believes, be a precursor to full MaaS, “but at the moment they are expensive and clunky”.

The next few years will focus on learning about consumer behaviours and patterns of use, assessing what works and what could form a proposition that the customer will pay for.

Do such services spell the end of the company car? “We’ve seen people exit company cars for a number of years but I believe perk and essential cars still have a role to play,” Jones says.

“We are in a hiatus (with the BIK uncertainty). But as we move to hybrid and electric vehicles, it could give the company car a shot in the arm.”

Influence of PCH on Lex growth

It has brought thousands of private motorists into the fold, which requires a change in mind-set, according to Richard Jones. One priority is to establish the correct infrastructure, such as for end of contract terms.

“This is an area where the industry hasn’t got it right yet for personal. Why? Because they are running a corporate contract return policy,” says Jones.

He believes that a fundamental part of a successful company fleet policy is to address the personal needs of employees.

“There are so many ways to buy a car which is a difficulty for consumers. But employers can help and that’s where we have to go with our affinity products because it cuts out the noise for employees,” Jones says.

“We can also give the employer some protection if the employee does some business travel because we can put the right insurance and SMR around the vehicle.”

He adds: “I don’t think company cars will disappear, but we can offer employers an alternative.”

1 “If you start as a procurement initiative, you will struggle to run a fleet that will serve your business needs. Procurement can’t be too overbearing.”

3 “Have a sustainability agenda and evolve what it means for you and your organisation. Sustainability has to fit business objectives; it’s not a goal in its own right.”