Restore Datashred: Head of fleet Ian Walsh urges Government, 'give us clarity to invest in our fleet'

Datashred's head of fleet Ian Walsh is making key investment decisions, now but says the Government could do more to support fleets.

Concerns over clean air zones (CAZs) in major UK cities and forthcoming safety standards in London are preventing fleets from making confident investment decisions about the types of vehicles they should be buying, particularly when those vehicles are often kept for five years or more.

Some are holding back from ordering new vehicles altogether, which has the double whammy of affecting the health of the industry – and therefore economic success – and extending vehicle age, which hits emissions levels and slows the speed at which the latest safety technology comes to market.

This lack of clarity over future legislation is adding unnecessary challenges to running an efficient and compliant fleet, according to Restore Datashred head of fleet Ian Walsh. 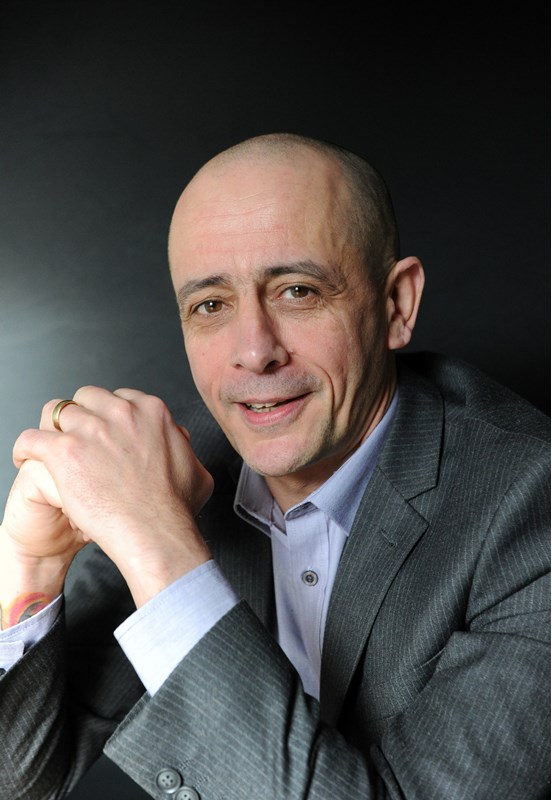 “Our biggest challenge is thinking far enough ahead and ensuring we have the right vehicles on the fleet,” he says.

“The Government needs to give us complete clarity about what they are working on, to allow us to make decisions now.

“Consultations do not help us when legislation is tweaked at the last moment,” he adds.

“We have five-to-seven year plans – that’s our vehicle operating cycles. So we need to know now how new legislation could affect us in 2025.”

The shredding specialist has countered Government prevarication by taking the plunge with electric vehicles, partly with corporate social responsibilities in mind, partly in anticipation of low emission zones and CAZs.

Walsh also considered compressed natural gas and hydrogen, but his modelling showed that electric was the most cost-effective option even though it does require extending the operating cycle to six years.

“The costs are actually not that different to diesel – in fact, overall they could be cheaper to run,” Walsh says. “The running cost is up to 80% less than diesel and this offsets the increase in the monthly lease rate.

“If a vehicle is doing 80-100 miles per day, the electric vehicle starts to pay for itself, especially in cities where there are emission charges.”

He is in discussions with suppliers and hopes to start taking initial deliveries this summer in London.

“We are also considering using range-extenders which give greater flexibility and a wider capability,” he adds.

“Everything will be done through the fleet renewal programme. In five years’ time we will see a substantial change in the fleet make-up across the country.”

Walsh didn’t leave school aspiring for a career in fleet – in fairness, few fleet managers do. After several years serving in the Royal Navy as a weapons engineer, he began working as a salesman for a small shredding business, Shredaway, in 1995.

Within a couple of years he had assumed responsibility for the fleet of six vehicles.

READ MORE: Freedom Group: 'It doesn't have to be like this,' says Paul Brown

He took on the role understanding that it would be an interesting opportunity.

As a small business, Shredaway provided the ideal environment to learn about how a job-essential fleet plays a fundamental role in a company’s success.

“You do every part of the job and adapt and grow as the business changes,” says Walsh. “Everything was on-the-job learning, but it was all a natural progression.

"There was no driver CPC or training so we had to teach ourselves. We are better placed now with all the training opportunities.”

Following acquisition by PHS in 2006, the fleet grew to around 50 vehicles; 10 years later, it was bought by Restore plc, which has since amalgamated several shredding operations to create the current organisation.

Walsh is now responsible for more than 250 vehicles – 25 cars, 25 vans and more than 200 trucks, of which 62 are mobile shredding units and 11 are specialised security collection vehicles.

The company, which double shifts its vehicles in certain areas due to customer demand, has more than 300 drivers. 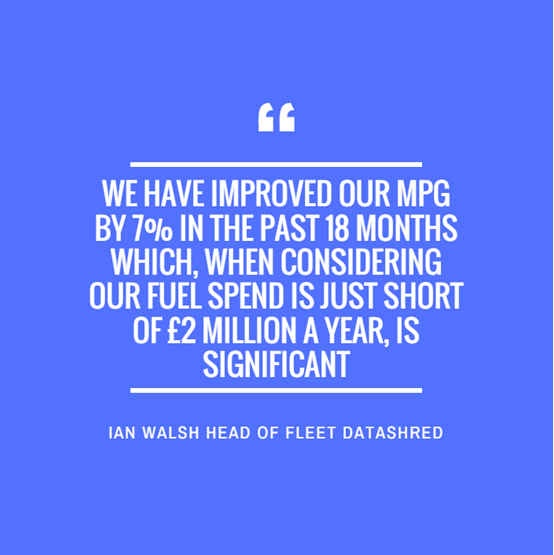 The majority of Walsh’s time is spent managing the heavier vehicles, supported by a team of transport managers. This will only increase as Restore Datashred moves away from cars to cash.

“The business prefers to offer cash because of the admin and tax issues and we’ve had a significant proportion take it up,” he says.

“A major influence has been the changes to the way the tax is calculated on cars if you also offer a cash option, although it is also down to the increase in benefit-in-kind (BIK) rates.”

With a grey fleet identical in size to the car fleet, the business has implemented robust checks to ensure vehicles and drivers are compliant with policy.

“We have the same checks as for a company car driver; it’s managed in the same way – it’s just a different way of funding the car,” Walsh says. “Most vehicles are less than three years old.”

With management of the car fleet largely process-driven, Walsh can devote more time to the vans and trucks.

One of his major projects has been to right size the vehicles on the fleet. He removed a large proportion of the 7.5-to-11-tonne box body trucks, replacing them with five-tonne Iveco chassis.

Simultaneously, he reduced many of the 18-tonne bodies to 12 tonnes.

Switching to the Iveco trucks is saving the company £150 per month per vehicle in leasing costs, while the reduction in fuel totals £4,500 per vehicle per year.

READ MORE: Ricoh UK: 'Our main priority is our drivers'

“We have improved our mpg by 7% in the past 18 months which, when considering our fuel spend is just short of £2 million a year, is significant,” Walsh says.

“We will also save money on parts and tyres, but we’ve yet to calculate the total cost savings.”

With large parts of the fleet operating in city centres, safety and protection of vulnerable road users are priorities. Downsizing to smaller vehicles helps, but Walsh is also equipping vehicles with the latest safety technology.

Sensors and blind spot protection are already installed across the fleet, while 360-degree cameras are being fitted together with audible warnings when vehicles are turning left.

The cameras are starting to show a positive impact on driver behaviour but it is still too early to fully assess the benefits. However, drivers have reacted well to the equipment; they understand the reasons why it is fitted. 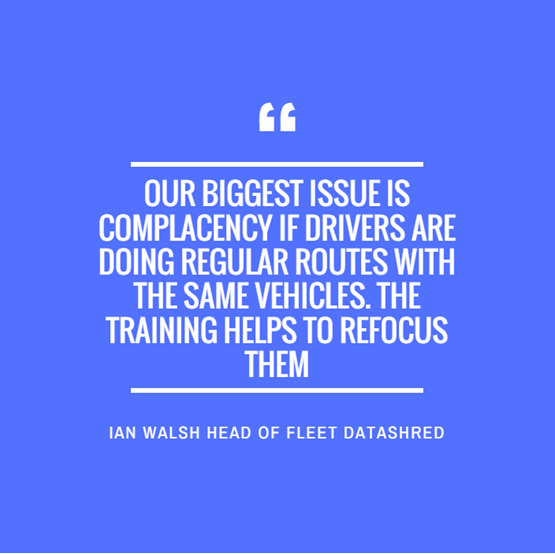 “We work in partnership with our telematics supplier to get the information that is important to us at any one time,” Walsh says. “We don’t get myriad reports, just the key ones.

For example, a dip in the fuel tank triggers an alert, we get geo-fencing reports and it constantly monitors axle weight indicators. We keep it sensible – we don’t want to overload the driver – but we do want to enhance safety.”

Faced with the impending Direct Vision Standards (DVS) in London – albeit with no confirmation about the actual requirements – Walsh is now looking at the option of passenger door windows that extend down to the footwell.

“We do need to have clarity on the standard – it’s a minefield at the moment,” he adds.

Risk management is not just about making the vehicles as safe as possible; drivers are also a key consideration. 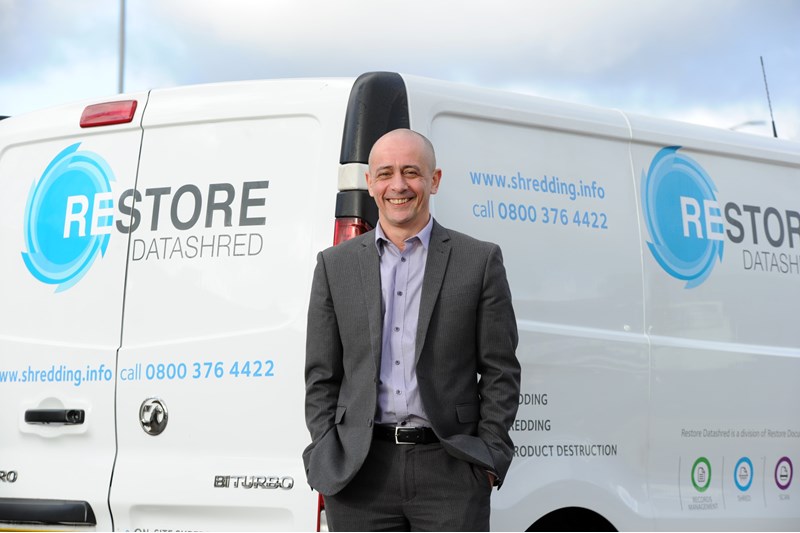 They have all undergone a series of training sessions including going out on bicycles to understand the cyclist’s view of the road. It was, says Walsh, “an eye opener”.

He adds: “Vulnerable road users are the biggest risk for any transport operator. Our training raises awareness and we also do online learning through FORS to continually remind them they are professional drivers.”

Walsh has been working with Cranfield University since last October on a driver risk metrics programme, which is now nearing completion. The course highlighted the drivers who needed additional interventions.

“Our biggest issue is complacency if drivers are doing regular routes with the same vehicles. The training helps to refocus them,” he says.

“It also looks at root causes which has been really worthwhile. It has enabled us to identify the drivers who drive for excitement, for example, and take action.”

Restore Datashred operates a reward scheme based on feedback from clients whereby drivers are awarded vouchers if they receive positive comments.

Those receiving poor feedback are given the opportunity to improve their behaviour through training and performance reviews.

“We educate and correct as part of our strategy,” Walsh says. 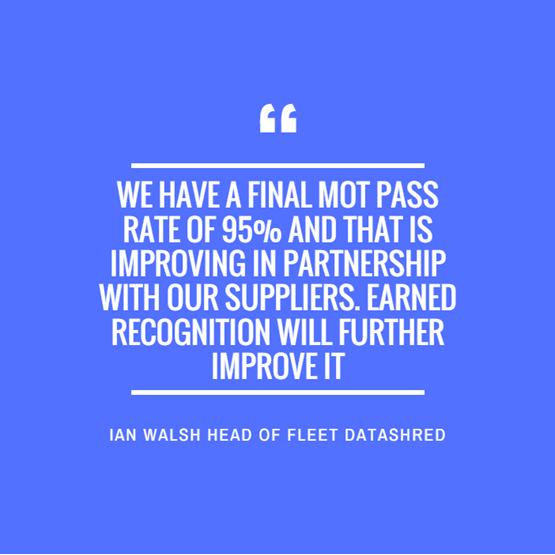 The company’s focus on safety makes it a prime candidate for the DVSA’s new Earned Recognition scheme.

Walsh believes it could be a positive move “if it works as intended”. Restore Datashred is working towards it.

“It’s a change in how the DVSA is targeting at the roadside,” he says. “So we have to educate the drivers and look at the KPIs that we need to be compliant.

"We have a final MOT pass rate of 95% and that is improving in partnership with our suppliers. Earned Recognition will further improve it.”

Out of hours bid to keep parking charges down

Restore Datashred, like most London operators, has its fair share of parking charge notices (PCNs) from over-zealous parking attendants.

“It is a very difficult place to stop and deliver a service. Loading bays are too small and the only way to deal with it is to engage with clients for out-of-hours operation,” says Walsh.

“We also work with our drivers so they understand the issues and in some cases we re-route the journey.”

Most PCNs, if in a restricted area, are appealed; the company has a 20% success rate, which is worth £30,000-40,000 a year. If the driver is at fault, they are charged, although this accounts for less than one in 30 notices.

“We have improved our reporting processes over the past year to reduce the burden of PCNs,” Walsh says. “We now gather the data and act on it.”

Fleet boss Maurice Elford made software a priority when joining L&Q. He is now a double Fleet News Award winner.

Defra: ‘We have ditched diesel’

Defra fleet chief Dale Eynon has set a bold strategy: ditch diesel and convert the entire fleet of 4,000 cars to petrol-hybrid or pure electric by 2025.

Nottingham City Council is ramping up its electric vehicle plans as the city looks to tackle air pollution by introducing a Clean Air Zone (CAZ).