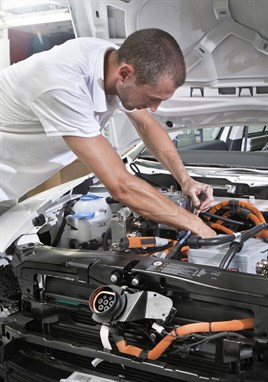 Electrifying your fleet and cutting your exhaust tailpipe emissions doesn’t necessarily have to mean opting for all-electric vehicles. There are a number of different technological solutions which can each give distinct advantages in terms of range, performance and versatility.

Running ‘pure’ electric vehicles (EVs) with zero tailpipe emissions is now a viable proposition for many fleets – and is incentivised by benefits such as exemption from the London congestion charge, a 100% first year capital write-down allowance, exemption from annual road tax and BIK, and grants of up to £5,000 per car towards purchase (until the end of March 2012). An increasing variety of models are now on offer from mainstream manufacturers, capable of motorway speeds and giving good around-town performance – electric motors deliver their peak torque right from the get-go. Modern-day lithium ion batteries have a greater power density than the old lead-acid technology once used, and thus allow today’s EVs to go further and faster, for longer.

A typical EV currently on sale, however, still has a range of only 90 to 100 miles between charges, and while high-voltage fast-chargers are now available – such as the units newly installed at some motorway service stations – a full recharge from a conventional power supply will take some six or seven hours. EVs can suit fleets which do a low daily mileage and which operate around a fixed base where charging points can be installed – and using a cheap off-peak electricity tariff, can cost as little as 2p a mile for their energy. Charging using renewable electricity from a sustainable source – solar, wind, hydroelectric – will further boost your fleet’s green credentials, too.

If you were to visualise a continuum between all-electric vehicles and conventional internal combustion engine (ICE) cars, then range-extended EVs (RE-EVs, or E-REVs) would be the next step along the line from the ‘pure’ EVs. RE-EVs feature a battery pack and electrically-driven motors, but add a small and relatively simple ‘range-extender’ engine which then kicks in to act as a generator when extra power or range is needed – giving supplemental boost for overtaking or uphill progress, for example. This does not actually drive the axle directly, however.

The Chevrolet Volt and closely-related Vauxhall Ampera have a 1.4-litre petrol engine and an all-electric range of up to 50 miles. Drivers doing a low daily mileage around town and regularly plugging in to recharge the batteries might rarely even use the engine – but it’s there to give the flexibility for longer trips and higher speeds, giving a total range of more than 300 miles, and to alleviate ‘range anxiety’.

Hybrids such as the Toyota Prius and Honda Insight feel even more like conventional vehicles, and their engines are fuelled in the usual way – but they add a little electrical assistance. They have smaller batteries than RE-EVs, and a shorter range running on electric power alone, but do not need to be plugged in. Energy otherwise lost under braking is captured through an energy recuperation system to be reused driving the motors. The petrol engine of the Prius can disconnect completely, and it can move off under electric power alone; it is described as having a ‘series-parallel’ system. The Insight has a ‘mild’ parallel hybrid system and can cruise all-electrically for a short range.

Some hybrids, such as the upcoming Peugeot 3008 Hybrid4 and 508 RXH Hybrid4, use diesel engines drive the front axle and their electric motors the rear.

A plug-in hybrid utilises rechargeable batteries, or another energy storage device, that can be restored to full charge by connecting a plug to an external electric power source. It combines the characteristics of a conventional hybrid and an all-electric vehicle, and gives drivers the opportunity to further extend their all-electric mode by topping up their batteries’ state of charge.

Supporters say it offers urban driving during the week on the electric charge and longer driving at the weekend through the petrol or diesel engine. Forthcoming cars include the Toyota Prius, Peugeot 3008 and Volvo V60.

Fuel cell cars are still in the field trial stages, but promise to be a highly-efficient alternative. A fuel cell contains electrodes and a film of electrolyte fluid, and as it takes in oxygen, the hydrogen is catalysed and broken down: electrical energy is released. The only by-product is water vapour.
On-board storage of pure hydrogen has been an issue as it needs to be compressed and contained at very high pressures. Safe refuelling practices and strong fuel tanks are being developed and cars such as the Honda FCX Clarity and Hyundai ix35 FCEV have been through rigorous crash-testing.

Hydrogen has been hailed as “the fuel of the future” as fuel cell cars have the zero-emissions benefits of EVs and the range of ICE cars, but do not need heavy, bulky batteries nor a dedicated recharging infrastructure.