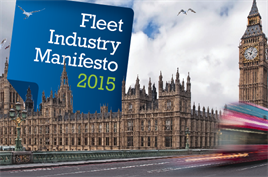 Support for national road pricing was the surprise outcome of the first Fleet Industry Manifesto meeting, held by Fleet News in conjunction with the BVRLA and ACFO.

The topic was tax and emissions and the objective was to create consensus among fleets and leasing companies for a fleet manifesto to take to the three main political parties to inform their own manifestos ahead of the 2015 General Election.

Among the more pressing requirements were a commitment to electric and ultra-low emission vehicles (ULEVs), harmonisation/standardisation across all CO2-based tax regimes and policies that encourage staff to switch from cash allowance to company car.

However, looking further ahead brought national road pricing into focus. All fleets and leasing companies believed that road pricing offered a simplified approach to charging for road usage, one which could replace all other forms of tax such as fuel duty and VED, as long as it was fairly applied.

It also paved the way to a more intelligent means of controlling traffic and congestion by enabling different charges to be levied at different times of the day. Demand pricing on busy roads would encourage people to travel at quieter times.

Manifesto attendees pointed to examples in other industries, where charges were based on peak and off-peak times, such as supply of electricity, telephone calls and train journeys, and also to the example of the M6 toll.

Administration costs would be reduced because companies would have to deal with only one tax system, which would be replicated for cars (business and private), vans and HGVs, including foreign vehicles.
One delegate said: “Although it’s not something we are likely to see until 2030, the industry needs to take a position that it needs to start being looked at.”

With traffic jams costing business billions of pounds a year in lost productivity, incentivising people to take leisure trips at non-peak times could have a significant impact in easing congestion.

“If they can do it on black boxes for insurance, you should be able to leverage that in terms of how you deliver a broad road pricing or congestion charging policy,” said a leasing delegate.

“Fuel’s a blunt instrument; VED is a blunt instrument. If you can actually control congestion through technology which you can, it’s been proven, why shouldn’t you put a financial charge on it as long as it doesn’t burden anybody else? It’s not an extra tax take.”

Manufacturers were urged to begin putting the technology into vehicles now in readiness for future policy. Any vehicle without the technology could be captured via automatic number plate recognition and charged a flat rate dependent on time of day.

Charges could also be fixed according to CO2 emissions, potentially including no charge for electric vehicles in urban areas, helping the Government to meet its environment objectives.

“As an industry I think we should be a great advocate of road toll charging as long as it doesn’t increase the total burden,” said one fleet manager.

A leasing company representative added: “If you remove all your taxes, you start to remove all the management and administration costs around each of those. You’ll have administration around the technology, but we’re talking about putting the stepping stones in place for that future strategy which is the same whether you’re an HGV, LCV, private user, company car user, and even for foreign vehicles.”

Delegates believe the Government should undertake research into the feasibility of road pricing, replacing numerous motoring taxes that are dwindling as cars get more fuel efficient (fuel duty in particular), and replacing them with a tax based on road usage.

However, this should be cost neutral. Advances in car connectivity should make this possible within five years, although 2030 was agreed as a more realistic timeline.

Taxation policies drew a long and thoughtful discussion on the need for standardisation and harmonisation of the various regimes, particularly those based on CO2 emissions.

Concern was raised about the current situation of the “multiplicity of CO2 bands and rules”, plus the “emissions-based system on one side and not the other”, in a comment referring to the way AFRs and AMAPs are reimbursed based on engine size or annual mileage and not CO2 emissions.

In addition, VED emissions bands bore little relevance to benefit-in-kind emissions bands or lease rental restrictions. The Government needed to agree a standard definition of a green car to apply across all tax regimes, delegates agreed.

In a comment about proposals under the office of tax implications to abolishing BIK and instead go through real-time payroll collection as a cash equivalent, the BVRLA’s Jay Parmar told the meeting: “We’ve worked out that a 13% tax rise on the company car driver.”

Delegates agreed that the Government needed to consider the importance of the automotive industry to UK plc as well as its own tax revenue.

Ministers were urged to consider how they might support the fleet sector by helping companies to encourage staff opting for a cash allowance to return to a company car scheme.

This would have safety as well as monetary benefits by reducing the grey fleet, which is more difficult to control.

With the number of company car drivers paying BIK down from 1.61 million just before the new CO2-based tax system was introduced in 2002 to 950,000 today, it means 560,000 employees are no longer contributing to the Exchequer.

It also impacts on the Government’s green agenda as many cash takers opt to buy a higher emitting used vehicle.

“Company cars are a useful tool for business: they are substantial contributors to the green agenda and they contribute as a significant tax earner,” said one leasing representative.

One option discussed was to revise AMAPs – around four million claims are made annually with the average age of vehicle almost seven years old.

One option was to base payments on CO2 emissions; another was to consider aligning reimbursements with the real-life scenario.

ACFO director Julie Jenner said: “We did our own calculations when we did our ACFO survey and the average annual grey fleet mileage was 1,800 miles, so we are saying that for your average public sector worker you might want to pay, for example, £1 per mile for the first 2,000 miles and 20p afterwards. This would start to influence change.”

Consensus was reached on a figure of 50p per mile for the first 2,000 miles and 20p per mile afterwards to encourage people to choose low emissions cars or opt back into the company car fleet.

Emissions-based legislation also coloured the discussion on electric vehicles and ULEVs, with fleets and leasing companies calling for “commitment” from the next Government.

Agreement was reached on a policy of basing BIK on the price of an electric vehicle once the £5,000 Government incentive had been taken off and before VAT, rather than the P11D as now.

The Government also needs to provide clarity about whether electricity provided by an employer for recharging is taxable or not and whether a taxable benefit arises if an employer pays the difference between cost of installing an EV charge point and the grant.