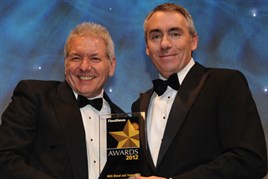 NHS Blood and Transplant (NHSBT) keeps its liveried fleet of 500 vehicles in good condition yet over a three-year period
it was hit with 160 end-of-contract damage charges from its leasing provider, amounting to £82,427.

“We do about 35,000 miles year in our vans but it’s generally less arduous work. When they go back they do have nicks and scrapes but they’re not heavily damaged.

“We know that when they went back to the leasing company and they put them through auction they were generally getting higher than the average book price.”

After witnessing his ‘damaged’ vehicles going through auction and fetching above CAP, Bannon decided it was time to call the leasing company in for a chat. “To its credit it said ‘we’ll work something out’,” he says.

The solution was to no longer issue damage charges. Instead, NHSBT entered into a profit sharing agreement with its leasing provider.

The agreement is based on CAP prices for the month of auction, plus a 5% uplift (which acts as a ‘cushion’ for the leasing company).

“Anything that they achieve above that we split 50/50,”Bannon says. “Anything that is below that we pay in full because that’s generally down to excessive wear and tear.”

The scheme is delivering savings for NHSBT – in the first 18 months of the scheme it was in credit by £9,558.

Fleet News: Does the scheme still work when the used vehicle market is down?

FN: Are you confident that the inspections are fair now?

LB: Yes. I do a random sample every so often and whenever I’ve asked for the detail it’s been spot on. I have to trust my supplier but they give me no reason to doubt them. When I’ve gone and looked at the auction prices they are exactly as they say they are.

FN: What are the other benefits of the scheme?

LB: There’s an administration saving. I used to spend an inordinate amount of time going through every single invoice that came through, looking at the photographs, looking at the costs, phoning them up, disputing and then coming to an agreement.