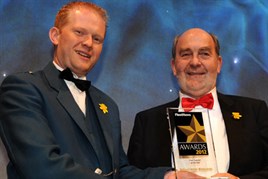 In a market 25% down in annual sales, National Windscreens has bucked the trend, maintaining a 100% customer retention rate and sustaining its impressive 19% growth in 2011.

As well as serving some of the biggest car and van fleets in the country and being a preferred supplier to 13 of the top 20 companies in the FN50, 95 of the top 100 HGV fleets are also serviced by National Windscreens.

Chairman George Douglas, who started the company 40 years ago, believes customer service should be at the heart of every company and for success to be possible, a team of skilled and dedicated people is crucial.

“People look for the same things when they are looking to buy – quality, service and price – and it’s the marriage of these three things that works.

"We can deliver on the front end by having a committed, passionate and well trained work force,” says Douglas.

It was already an integrated part of National Windscreens but the decision to rebrand was intended to more accurately reflect the company’s market position and dispel any confusion surrounding the relationship between the two brands.

Now National Windscreens encompasses over 110 branches and in excess of 800 mobile technicians throughout the UK.

The Fleet Supplier of the Year award is designed to identify a company which has gone that extra mile in providing exceptional service to fleet customers and the judges were impressed by National Mobile Windscreens’ personal touch and ‘customer first’ attitude that helped it stand out against its rivals.

Fleet News: You are in the process of consolidating under one National Windscreens brand – how long has the move been in the pipeline?

George Douglas: National Windscreens is a consortium that I started 30 years ago.

We are consolidating the Mobile Windscreens brand into National Windscreens because it makes sense – it’s that simple. We have traded as two brands for a long time but we realised there was still a degree of confusion. It just felt like the right time to make the move.