Mobility in a post-pandemic world 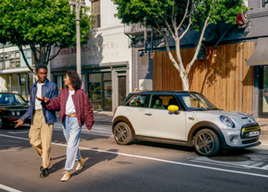 This feature originally appeared in the July 2020 edition of Fleet News. Read the article in the digital issue of the magazine by clicking here

The effect the Covid-19 pandemic has had on the UK’s transport system has been immediate and drastic.

Car use dropped significantly when lockdown was announced in March, but has since rebounded – although not to pre-pandemic levels – while the number of people using public transport fell through the floor and has remained low.

Department for Transport statistics show that for the last week in June, the number of train passengers was just 14% of those in the same period last year, London Underground users dropped 85%, with buses seeing a 66% fall.

While this is probably to be expected as the number of people travelling to workplaces fell, people are also avoiding crowded places to reduce the risk of infection.

In its new ‘Moving forward: how Covid-19 will affect mobility in the United Kingdom’ report, the McKinsey Center for Future Mobility says the necessary physical distancing requirements will permanently change the mobility mix in large cities. The impact will be more limited in non-urban areas.

“There could be a notable shift away from shared mobility solutions and public transit, especially in urban areas,” the report says.

“Two factors are behind this change: reduced capacities as subways and other vehicles lower passenger limits to allow physical distancing, and reduced demand as people seek to reduce exposure by avoiding crowds.

“Shared mobility solutions, which were experiencing strong growth before the crisis, will now see slower uptake, especially over the short-term.

“Demand has already collapsed because of physical distancing requirements, and consumer fears of infection could continue to decrease car sharing.”

A survey in the United States in March by Cars.com found 40% of respondents were using ride-hailing services less often than before the pandemic, while Ipsos research in China found there has also been a shift in the preferred method of transport.

Before the outbreak, public transit was a preferred mode of transport for 56% of respondents: it is now 24%. The popularity of ride-hailing and taxi has also declined significantly, falling to 12% and 15% respectively. Both had been at 21%.

The two surveys found people had responded to the pandemic by turning to their own cars. The Cars.com research found 93% of respondents were using personal vehicles more, while they were now a preferred mode of transport by 66% of consumers in the Ipsos survey. Before the pandemic it was 34%.

“It’s pretty clear from the consumer survey in China that people are worried about infection and so the personal car is the way to avoid that entirely,” says Rachel Binder, senior intelligence analyst at CB Insights.

Nicolas Brusson, CEO of car-pooling service BlaBlaCar, adds: “Individual modes of transport such as the personal car or bikes offer a safe haven for people as there are concerns around health and safety, and people are hesitant to share.”

However, this shift is unsustainable and inappropriate for large cities. “When I think of Paris – where we have our HQ – public transport carries about 10 million people a day and if you start having even 10% of those in private cars and travelling alone then you will have the biggest traffic jam in history for the region,” Brusson says.

Experts expect the number of people using shared mobility solutions, including public transport, will rebound, although McKinsey says “the pandemic could produce some permanent shifts over both the short and long term”.

Brusson says his company has seen people moving from public transport into car-pooling because it radically reduces the amount of contact people have with others compared with public transport.

“Instead of our drivers offering three seats in a car, as we did pre-pandemic, we allow them to offer just one and we have seen that pretty well adopted by drivers,” he adds.

“So, if you are about to choose between a plane, a train, a bus or a car pool, with a car pool you don’t go through a bus station or a train station, and limiting contact with people seems to be very important.”

One of the big ‘winners’ in the UK has been micromobility – bicycles and e-scooters - on both legislation and popularity fronts.

The Government has fast-tracked plans for e-scooter pilot schemes across the country due to the coronavirus pandemic.

Originally, these were due to begin next year, but went live at the beginning of July with Middlesbrough becoming the first city to take part (see page 10).

The trials, which are due to last 12 months, will test the vehicles’ safety, green credentials and ability to reduce congestion.

“As we emerge from lockdown, we have a unique opportunity in transport to build back in a greener, more sustainable way that could lead to cleaner air and healthier communities across Great Britain,” says transport minister Rachel Maclean.

“E-scooters may offer the potential for convenient, clean and cost-effective travel that may also help ease the burden on the transport network, provide another green alternative to get around and allow for social distancing.

“The trials will allow us to test whether they do these things.”

These form part of a £2 billion investment in cycling and walking aimed at encouraging alternative ways to travel.

Other measures include a Fix Your Bike voucher worth £50 for cycle repairs and extending the Cycle to Work salary sacrifice scheme to cover e-bikes as well as pedal cycles.

There has already been a significant increase in the uptake of cycling: for example, in the 13 weeks leading up to July 3, Halfords – the UK’s biggest cycle retailer – saw a 57.1% year-on-year increase in bike sales.

Furthermore, an updated Cycling and Walking Investment Strategy will be launched by the Government later this summer, with further measures to transform cycling and walking to deliver the its aims to double cycling and increase walking by 2025.

This comes on the back of a general trend which has seen the hype around the technology and investment fall: a trend evident at January’s
CES show in Las Vegas where noticeably fewer companies were showcasing their concepts and technology.

“It’s no secret that a lot of the hype around autonomy has subsided over the past two years,” says Tarek Elessawi, principal at venture capital fund Plug and Play Ventures.

“We are primarily seed investors and in 2016/17 we saw hundreds of deals in the mobility and autonomous space, and then over the past two years that pace has definitely slowed.

“Last year we saw one-tenth of the deals we were seeing previously.”

“Two years ago there was £11bn invested in this space around the world,” he says.

“Last year it was only £4bn, but this year we are already just over £10bn – less than two-thirds of the way through the year, so this is looking like a good year with things starting to pick up.

“There is a real feeling over the past month or so – and maybe it’s been helped by the intensity of our focus because we haven’t been travelling as much, ironically – that there is a real sea change.

“I’m hearing far more from industry in its various guises and government in all the various departments, all picking up on the fact that connected and automated mobility is the thing to go forward with. There is a focus on freight, but that interest in investment is there.”

McKinsey also says social distancing rules could lead to the temporary suspensions of testing programmes, and this was the case for autonomous vehicle software company Oxbotica, which trials self-driving cars in the area around its Oxford base.

It restarted its trials as soon as it could after 12 weeks of lockdown, but with a screen between the two occupants who need to be in the vehicle.

“It was harder work not being able to have vehicles doing the testing, but it made us shuffle our timeline and focus on simulations,” says Paul Newman, co-founder and CTO of Oxbotica.

This includes using its ‘deep fake’ technology (see panel below) and speeding up parts of its development programme.

“We had fewer meetings and fewer introductions so we could get into the big-ticket items, and my challenge now is what do we take forward from this period as there is something to be learned from it,” he adds.

The system is capable of generating thousands of photo-realistic images in minutes to help the company expose its AVs to near-infinite variations of the same situation without the need for real-world testing.

The algorithms allow the company to reproduce the same scene in poor weather or adverse conditions and subject its vehicles to rare occurrences.

The technology can also switch one object with another – such as replacing a building with a tree (see image three, class switch) – while ensuring shadows or reflections appear as they should.

It then uses these synthetic images to
teach its software, producing thousands of accurately-labelled, true-to-life experiences.

Paul Newman, co-founder and CTO of Oxbotica, says: “Using deep fakes is an incredible opportunity for us to increase the speed and efficiency of safely bringing autonomy to any vehicle in any environment.

“What we’re really doing here is training our AI to produce a syllabus for other AIs to learn from. There is no substitute for real-world testing, but the AV industry has become concerned with the number of miles travelled as a synonym for safety.

“And yet, you cannot guarantee the vehicle will confront every eventuality, you’re relying on chance encounters.

“The use of deep fakes enables us to test countless scenarios, which will not only enable us to scale our real-world testing exponentially, it’ll all be safer.”

Cox Automotive has highlighted the opportunities for fleets and leasing companies to evolve their business models and invest in new partnerships, in its 2020 Automotive Insight Report.

Fleet Logistics has launched its first mobility solution aimed at businesses as it said the company car is no longer the most attractive option for all its customers.

Why now is the time for sustainable mobility

Gilson Santiago, CEO of Masternaut and senior VP of fleet management at Michelin, discusses the role data and a connected fleet plays in addressing the four pillars of sustainable mobility: safety, respect for the environment, efficiency and accessibility.