In the spotlight: Honda 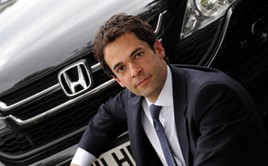 A similar plan is in place with FTSE100 companies, while the regional team has been tasked with meeting at least 10 ‘valuable’ customers a week – decision- makers in the market either now or in the future.

Dealers will play a major role in the corporate strategy. Honda is to split the network into three depending on the level of fleet sales.

Elite fleet dealers will be the main point of contact for leasing companies.

They will act as an extension of Honda and will receive preferential treatment, such as access to Honda’s corporate demonstrator cars, invites to launch events and access to stock.

They will also be involved in supply planning and stock will be held back where necessary to ensure continued supply.

Honda intends to have 15 Elite Fleet dealers – so far 12 have been appointed, four in each region. Each has agreed to a minimum volume of 150 true fleet sales a year, to have 25 buying customers outside of the leasing companies and to have specialist staff.

They will be subject to user-chooser specific mystery shopping and will be required to supply accurate corporate accounts for benchmarking purposes.

The 50 dealers that currently make up the corporate network will remain in that role with a remit to target medium-sized businesses in their local area, with support from the Honda corporate area manager, while the remainder of the 182-strong network will be encouraged to focus on smaller fleets through Honda’s contract hire offering.

Vital to the strategy is the ownership experience.

Honda is pinning its colours against a customer service USP; this, says Hummel, is key to loyalty and is “a real differentiator”.

He recognises that the first fleet consideration when it comes to selecting cars for the choice list is the wholelife cost.

With service, maintenance and repair accounting for 11% of the rental cost, Honda is favourably placed with its outstanding reliability record. And this is where the ownership experience kicks in.

The top three call-outs by the AA to Honda customers are for keys locked in the car, misfuelling and batteries drained by lights left on.

Fewer than 1% are due to mechanical failure.

“Cost of ownership is important to how we sell the car in the first place,” Hummel says, “but customer satisfaction is the important influencer on the loyalty rate.

“We want customers to be delighted by the decision they have made.”

Honda has had a rough few years, but Hummel has seen the product plan and is certain the recovery is now under way.

“I am very confident we are on the right track,” he says. “I’ve joined just as we start the upturn.”

Cars will be available a month later, with fleet interest likely to be lit by the 138g/km 2.2-litre diesel engine, down from 147g/km, with fuel efficiency at 53.3mpg.

CIVIC Hummel describes the 2.2-litre diesel engine as “ground-breaking” with more power and more economical “by a significant amount compared to the competition and massive compared to what we have now”.

Rumours suggest sub 110g/km. A smaller diesel engine will follow in late 2012 which should duck below 100g/km.

CR-V The all-new, fourth-generation CR-V is set to go on sale in Europe in Autumn 2012.

Compared to the previous generation, the concept model takes on a more aggressive stance with deeper sculpting of the body lines and a bolder front fascia. It will be equipped