In the spotlight: Kia 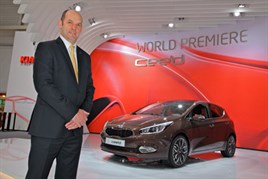 Which manufacturer was the fleet star of last year?

The unlikely answer, in sales terms at least, is Kia.

The Korean manufacturer increased registrations to the corporate sector – the ‘true fleet’ sales – year-on-year by more than any other carmaker, and by a sizeable margin.

So far this year, sales are up another 23% taking it to 13th place.

And it achieved all that without having a car in the family sector – the second most popular category in fleet, accounting for 18% of volume.

The company has confounded critics who predicted that the only way for it to maintain the sales momentum enjoyed during the scrappage scheme in 2009, when its total market share rose from 1.47% to 2.54% (19,313 cars), would be to pump cars into the short-term rental market.

To be fair, Kia has increased its daily rental sales quite considerably as well, by 36% last year.

And it has also taken a greater slice of the Motability market as well as registering many more cars internally as ‘captives’.

However, this type of action into the less profitable areas of business is sustainable as long as growth is being achieved in the more lucrative sectors like corporate business sales and retail.

And, as long as the market share is not tipped in favour of rental, it is unlikely to impact on residual values.

That Kia is even able to push hard into the fleet sector is something of an about-turn.

The company’s Korean parents have traditionally taken a dim view of fleet, believing it is all unprofitable short-cycle business.

There is no fleet sector in Korea while in America, Kia’s other major market, fleet is a different proposition.

Successive UK managing directors have tried to change this perception and it appears there is now greater understanding in Korea.

It comes partly thanks to the twin efforts of current UK managing director Michael Cole and his predecessor Paul Philpott, who has just moved from being chief operating officer of Kia Motors Europe in Frankfurt to return to the UK as its first non-Korean president and CEO.

But perhaps it should not come as a surprise that Kia has been able to disprove the naysayers and make sizeable gains this year. It has, after all, a recent record for trailblazing.

While sister company Hyundai deserves a large slice of credit for shaking up the old order when it introduced its five-year warranty in 2002, Kia took this a stage further with a seven-year warranty on the Ceed in 2007 which it extended across the whole range in 2010.