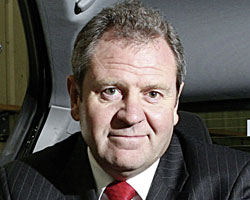 In the fleet sector, where self-insured policies and third party insurance with high excesses mean companies tend to control where their vehicles are repaired, bodyshops have been eager to grab a slice of business.

Progress has been hampered by the highly fragmented nature of the bodyshop sector, with thousands of small owner-drivers jostling in a price-led retail market controlled by insurance companies.

Aside from some success with local SMEs, few bodyshops have been able to break into fleet in any meaningful way.

That could be about to change. Nationwide Accident Repair Services, the market leader in private car repairs, is looking to replicate its success in the corporate market – and it has the one thing that large fleets need: a national network which can offer consistent service and pricing.

“We estimate that the market for fleet repairs is just under £1 billion in terms of the amount of spend that is out there,” says Michael Wilmshurst, chief executive of Nationwide.

“And we think there is a significant opportunity for us to expand.”

Wilmshurst puts the growth down to being “more transparent” about what the company can do.

Until last year the group had four separate operations – Nationwide Repair Centres, Network Services, Mobile Repair and Motorglass. However, these have now been brought together under the brand ‘Nationwide’.

To support the re-brand, Nationwide set up a dedicated fleet team this year consisting of eight business development managers (covering eight territories across the UK) and two national account managers, who are responsible for handling the biggest fleets.

“Previously, some fleet customers were unaware of the services being offered across the group,” Wilmshurst says.

“By working together as a team we’ve made it more apparent to people that other services are available and they can all be done from our central call centre.”

Wilmshurst claims that some fleet operators find it difficult to manage a multitude of relationships and “the ability to choose more than one service from the same source” is an attractive proposition.

Speed of administration is crucial; the company has invested more than £2m in IT and system infrastructure in the past three years.

“We’re linked by one central IT platform which enables us to give our customers management information and carry out administration, such as invoicing, at a central point,” he says.

“Fleet operators say that they particularly appreciate being able to go to one point and see exactly what invoices are outstanding and the costs attributed to a car.”

Nationwide’s online management information system allows fleet managers to see a list of the vehicles being repaired, where the vehicles are in the repair process, quotes and pricing, photographs of the work being carried out and estimated delivery, as well as details of any previous work done.

Drivers can also access this information if required to reduce the admin burden on the fleet team.

Transparent pricing is another initiative which Nationwide is working on.