Taking the shock out of electric vehicle tyre management 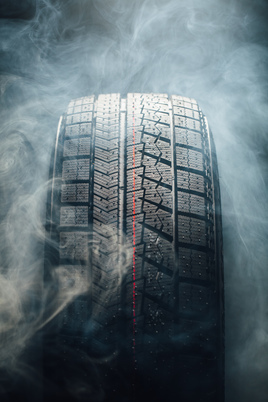 From areas such as charging to driver behaviour to tax considerations, the transition to electric vehicles (EVs) is having widespread implications on how fleets are managed.

These changes also include tyre policies.

Battery electric vehicles (BEVs) tend to be heavier than their internal combustion engine (ICE)  counterparts and the instant torque their motors deliver also places extra strain on the tyres.

In addition, a low rolling resistance is key to maximising a vehicle’s range.

These demands have led tyre manufacturers to develop BEV-specific tyres which, as well as meeting these requirements, also aim to reduce noise to capitalise on the refinement EVs offer.

These tyres tend to be fitted as standard by car and van makers, but they mean that fleet decision-makers operating BEVs need to ensure their tyre management policies take these considerations into account.

“Tyres are an extremely sophisticated piece of technology which we all too commonly take for  granted,” says Stuart Jackson, chair of tyre safety charity TyreSafe.

“However, drivers of BEVs must be aware of how different they could be to those on other cars, and, when it’s time to replace the original tyres, owners need to ensure they are buying the right specification.”

Kwik Fit recommends fleets adopt a like-for-like replacement policy wherever possible, due to BEV tyre development still being in its relative infancy.

“There may be constraints on homologated tyre availability in the short term as tyre manufacturers scale to meet the demand,” says Dan Joyce, fleet director at Kwik Fit.

“As the EV car parc grows, we will see tyre manufacturers increase their development of nonoriginal equipment (OE) alternatives to homologated options and as more data becomes available, we will work with our fleet customers to include these within their policies wherever suitable.”

While there are now new factors to consider when considering a tyre management policy, the Association of Fleet Professionals (AFP) warns fleet decision-makers not to overlook the basics.

“The fundamentals of good practice remain the same as for any other approach to tyre management,”says Lorna McAtear, AFP board member and fleet manager at National Grid. “This means safety is the guiding principle and the written policy should be based around factors such as minimum tread depths and regular visual checks.”

What are the differences between BEV and ICE tyres?

There are some key technological differences between BEV-specific and non-BEV-specific tyres.

The lighter weight can increase efficiency and a premium is placed on noise reduction due to the refinement levels offered by BEVs, while tyre manufacturers are also focusing on getting the balance right between grip and rolling resistance.

“This includes the material properties of the tread compound, which have been tuned for ultra-low rolling resistance to extend the vehicle range while coping with high levels of torque.

“The sidewall has also been designed to reduce aerodynamic drag and the profile yields less rotating mass, which, in turn, reduces the energy consumption.”

How does BEV tyre wear compare with that of ICE vehicles?

One of the benefits of running BEVs compared with diesel or petrol is their reduced service and maintenance costs due to their much lower number of moving parts, but some claim that tyre wear will be greater.

This is supported by analysis from Kwik Fit, which has found average front tyre wear across all fleet segments in 2020 was 4% greater for BEVs than ICE vehicles.

This was based on the number of miles driven by vehicles when their tyre tread depth had reached 2mm.

“It’s important to note that the sample size for this data varies significantly between powertrain types, so this is really only a high-levelexample of tread wear, but we are seeing the tyres on EVs requiring a slightly earlier change,” says Kwik Fit’s Joyce.

Van Wessum adds: “Due to the heavier battery, tyres on EVs tend to wear down considerably faster than those on vehicles powered by ICE.”

What are the effects of fitting non-BEV-specific tyres to a BEV?

Safety charity Tyresafe warns BEV owners that fitting a non-BEV-specific tyre could result in loss of range, increased noise, accelerated wear and the risk of failing while being driven, which could result in a serious incident.

Micheldever’s Towers adds: “Firstly, (non-BEV-specific tyres) will certainly reduce the range the vehicle will be able to travel between charges and this will be true whether you are fitting single, axle pair or full set replacements.

“Secondly, and this is particularly an issue with single replacement due to damage, replacing a BEV-specific tyre with a standard product will cause handling issues.

“This is mainly due to the weight of the tyres, but can also be as a result of the difference in grip, as EV tyres will have far better rolling resistance characteristics than standard ones.”

Towers adds there may also be a greater requirement within the EV market to ensure the tread depth on tyres on the same axle does not have too big a differential, as this could also cause handling issues.

“From a regulation and legality perspective, what’s important is to fit tyres that are the correct size, load index and speed index applications,” he adds. “Something EV drivers should pay particular attention to, however, is the importance of routine tyre inspections.”

Brian Porteous, technical manager at Michelin, wants to see more data from “everyday journeys” before he forms a definitive opinion on the impact of fitting non-BEV-specific tyres to BEVs.

“However, the torque in BEVs is typically higher than for ICE vehicles and they tend to spend more time in urban environments, both of which increase wear.

“For now, it looks like tyre wear rates will likely continue to be dictated by driving style, road conditions and the type of journey, just as they have always been.”

British Gas fits all its vans with non-BEVspecific Michelin CrossClimate tyres for the all-year round grip they offer and has found they last more than twice as long on BEVs than on diesels.

“Lots of people say you use loads of tyres on BEVs because they’re much heavier, but we’re not. It has gone the other way around,” says Steve Winter, British Gas head of fleet.

“We’re seeing far less tyre wear to the extent that we had Michelin check our tyres because we wanted to be absolutely certain that we were right.

Winter thinks part of this may be because the company is switching from Volkswagen Caddy diesel vans to larger Vauxhall e-Vivaro BEV models – so, instead of using car tyres, their new vehicles use van tyres, which are bigger and have stiffer sidewalls.

“I think the pure electric drivetrains are also a bit more gentle on tyres, because of the way they take up drive, the way it steers and manoeuvres,” he adds.

“I also think our engineers drive their BEVs more carefully because they want to maximise their range so they can get home at night.”

What about special tyres for plug-in hybrid vehicles?

Unlike for BEVs, tyre manufacturers do not make PHEV-specific products, although they may be fitted with tyres with a higher load rating compared with ICE vehicles to reflect their greater weight.

However, Towers believes fleets certainly need to be “more aware” of the tyres that they are fitting to their PHEVs.

“I believe that they need to have a more product-led approach,” he says.

“This means choosing what is right for the vehicle rather than the generic fleet ‘one sizes fits all’ approach we are currently seeing for ICE vehicles.”

He entered the profession after gaining an MA in journalism. While continuing to write for a variety of national titles, Ben has a particular interest in all aspects of the automotive sector.

DTM, which is backed by Palatine Private Equity, has acquired TyreWatch, a provider of real-time tyre monitoring technology for an undisclosed sum.

Goodyear will continue its 25-year partnership with the UK police after winning a new contract to continue to supply tyres to the entire force for the next four years.