Was this article useful?
Click the thumbs up >
THE Ford Focus is still proving a runaway success in the fleet market a few months before its replacement arrives in the UK.

The Ford Mondeo is also showing an improved performance compared with last year, although its July total was 521 units lower than July 2003 at 3,500. Ford has sold 31,494 Mondeos to fleets this year compared with 21,170 for the first seven months of 2003.

Meanwhile the Focus and Mondeo are top of the fleet diesel charts, posting rises of 40% and 50% respectively for the year to date.

A spokesman said: ‘We are astounded and delighted with the continued success of the Focus, particularly now that the car is being replaced towards the end of this year, which usually signals a slowdown in sales.

‘Our TDCi engines in both the Focus and Mondeo debunk the myth that diesels have to be noisy, smelly and slow, and we have just launched the new high-performance diesel version of the Mondeo, the ST TDCi with a top speed not far off the old Sierra Cosworth.’

Renault’s fleet sales are running at nearly 5% higher than January to July in 2003, with the Megane posting significant improvements over last year.

Keith Hawes, Renault’s director of fleet and light commercial vehicles, said: ‘Renault is profiting from the success of the Megane range, Western Europe’s top-selling model range, with more than a million units produced since its launch just 20 months ago.

‘The introduction of new models to the Megane family last year, namely the Sport Saloon, Sport Tourer and Coupe-Cabriolet, has certainly contributed to Megane’s rise in fleet sales with around 2,000 extra sales so far this year.

‘However the five-door Megane is also up 15% against a slight drop on the three-door Sport Hatch, which has also contributed to Megane’s success. Renault’s improved fleet sales are certainly product-led on the back of Megane and Espace, which has also doubled its sales this year.’

Fiat is also having a much improved year with an increase of nearly 11% to 17,495 units for the first seven months of 2004 compared with January to July last year, pointing to a strong public sector perfor-mance and the introduction of new models like the seven-seat Doblo increasing sales.

Tony Dittli, Fiat fleet marketing manager, said the company’s growth in the fleet market this year could be put down to a number of factors, including growth of the fleet sales team, an increase in the number of our fleet specialist dealers with greater incentives to approach local businesses in their areas.

‘We were budgeting this year for a reduction in our fleet sales as we have been cutting back our reliance on the daily rental sector, but we have actually improved our performance in the fleet market this year,’ he said.

Diesels make up one-third of sales

STRONG diesel sales in July have prompted revised forecasts for total registrations in 2004 and 2005 on the back of increases in the fleet and business sectors.

Latest figures from the Society of Motor Manufacturers and Traders show that July equalled the previous highest diesel overall market share at 32.5%. The organisation now believes diesels will make up 33% of new car sales in 2004, and increase to 36% in 2006.

However, new car registrations fell last month compared with the record July 2003, but prompted the SMMT to reduce its forecast for 2004 by 20,000 units to equal last year’s highest ever total of 2.58 million.

Meanwhile, the Ford Focus was the best selling car in the UK for the 50th consecutive month with a 6% share of the entire new car market. 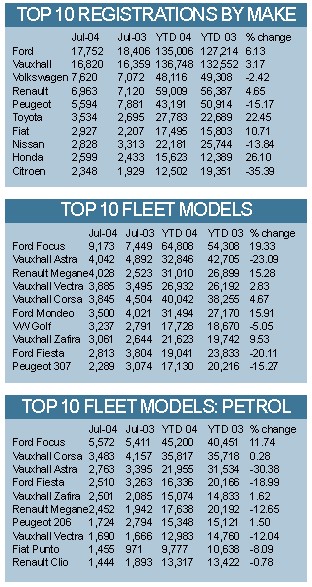 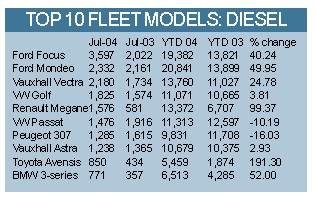