Was this article useful?
Click the thumbs up >
WITH a growing number of public sector fleets focusing on their green credentials, Lexus is hoping its new performance hybrid SUV can find a place within police forces.

The Japanese firm has had several enquiries from forces up and down the country after a liveried RX400h was shown at the National Association of Police Fleet Managers (NAPFM) exhibition in August. Legislation and public pressure mean organisations funded by taxpayers’ money are expected to cut down on pollution as much as possible.

With hybrid cars running on electric power at low speeds – producing no emissions – the concept of an economical and green yet powerful car is very attractive, according to John Bradley (pictured right), south east regional representative of the NAPFM and also fleet manager for Hampshire Constabulary, which is the first force to trial the RX400h.

He said: ‘Force fleet managers will be very excited looking at this new technology.

‘They’re all forward thinking individuals who consider seriously the operational costs of their fleets, including environmental effects.

‘The write-ups in the press already validated that this was unique and a ‘get-up-and-go’ vehicle. Everyone that’s driven it is quite astounded by the power.’

With a police-spec RX400h already on the roads of Hampshire, Fleet News made the trip down south to find out what officers think of their new lean, green speed machine.

Power doesn’t have to come at a price

THE radio attached to PC Chris O’Connor’s shoulder crackles into life. This could be it. After a morning patrolling the motorways of Hampshire and helping out a lost driver in a camper van, this report could be the big story I’ve been looking for.

A disembodied voice cuts through the static and destroys my Pulitzer Prize-winning dreams: ‘There’s a swan on the M3.’

While hardly the gruff face of urban crime, the giant birds are a nevertheless a constant nuisance on the main motorway from Southampton to London.

‘That’s the second call about swans today,’ O’Connor notes, and clicks his radio transmit button to tell control that we’ll check it out.

The genial policeman is part of Hampshire’s traffic division, but he is not the reason I’m sitting next to him. That accolade belongs to the car we’re in – a liveried Lexus RX400h.

The SUV is a new kind of petrol-electric hybrid from the Toyota stable, which owns Lexus. Having already established its environmental credentials with the Prius, the Japanese carmaker now wants to prove that hybrid can also mean performance.

Lexus has kitted out an RX400h with basic police equipment and given it to Hampshire Constabulary to trial for 10,000 miles.

The Prius certainly appeased environmentalists, but with 75bhp and 60mph in more than 10 seconds, it was hardly going to scare the bad men into a crime-free life.

The RX400h is a whole new kettle of fish. A 3.3-litre petrol V6 works alongside two electric motors, combining to put out 269bhp and reeling in 60mph in just over seven seconds.

Is that good enough for the boys in blue? Time to find out. A swan on the carriageway can cause serious congestion or even a pile-up, so it’s vital that the errant bird is dealt with as soon as possible.

O’Connor points the Lexus towards the motorway and presses the go pedal. After cruising around town under silent electric power, the V6 burbles into life and we roar up a slip road onto the motorway.

With mid-morning traffic building up time is of the essence, so O’Connor hits the lights and siren and floors it along the fast lane. 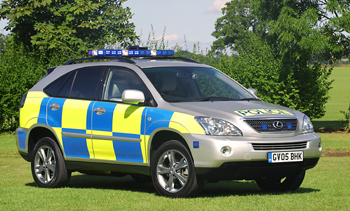 As we fly past other drivers, he gives me his impressions of the car.

‘From a performance point of view it’s very good,’ he said.

‘The pick-up is more than adequate for a big car this is pulling extremely well. You want that mid-range power so that when people come past you at speed, you can follow. This does the gentle patrol driving but also does the response driving where you need the power.’

The Lexus powers off the M27 and on to the M3 slip road. O’Connor guides the SUV round the bend at 90mph and accelerates on to the straight to 120mph. Drivers quickly get out of the way as the sirens wail.

We reach the area where the swan was reported, but see nothing. Despite another half hour of looking, there is no sign of a bird in distress. Moments later a call on the radio confirms that a Highways Agency car has found it on a slip road, and another police patrol is en route. O’Connor turns off the ‘blues and twos’ and returns to a 55mph patrol speed.

The man who has the final say on whether the Lexus stays is fleet manager John Bradley, but O’Connor’s impressions are positive.

He said: ‘As a response vehicle it was perfectly adequate.

‘You put it into the corners and it feels secure, you don’t know it’s a hybrid car when you drive it. ‘I’d be more than happy to see one of these on the fleet.’