Was this article useful?
Click the thumbs up >
THE world’s car manufacturers were out in force at the Paris Motor Show with a host of launches. In the fifth instalment we visit the Mazda, Citroen, Volvo and Mitsubishi stands.

THIS is the car which Mazda hopes will tempt more user-chooser buyers into the brand when it reaches the UK next year.

Launched at the Detroit Motor Show in January and already on sale in North America, the CX-7 offers the space of a large SUV, high performance and permanent four-wheel drive – but it won’t arrive in the UK until August or September.

Mazda UK fleet and remarketing director Adam Pumfrey said: ‘We rate the European-specification CX-7 as well worth the wait.

‘It’s not an icon in the manner of the MX-5, but it is an exciting package which will raise the profile of our brand, particularly in the fleet market.

‘Though the sector is still relatively small, fleet registrations already account for 60% of the non-premium part of the SUV sector and are growing fast.

‘We think a lot of new entrants are set to expand the market, but we’re confident our car will be highly competitive.

He added: ‘We’re on course to achieve a record of 19,000 business sales this year in the UK. We’ve looked at where our sales are and moved to support value areas as opposed to short-cycle channels, and the CX-7 is the perfect car for this.’

Powered by the 245bhp, 2.3-litre turbocharged four-cylinder petrol engine from the Mazda6 MPS, the CX-7 reaches 62mph from rest in 7.4 seconds.

Only 1,500 examples will be imported next year, and a likely pricetag of £25,000 should make it the Japanese firm’s most expensive model.

CITROËN’S new C4 Picasso MPV will compete head-on with the Volkswagen Touran on price when it goes on sale in January.

Ian Hughes, head of fleet sales and remarketing at Citroën UK, said: ‘Prices won’t be fixed until the end of the year, but we’re planning an aggressive stance.

‘This is our first volume product for the fleet market for some time and we intend to make the most of it with user-choosers.

‘Our research has made it clear that buyers in this sector want flexibility, useability and style.

‘It’s significant that the original Picasso is remaining on sale for a long time because the two cars will span from under £10,000 to £20,000 to make us stronger in the market.’

Citroën sold a total of 30,000 Picasso models in the UK last year and the fleet sector accounted for more than 18,000 examples. 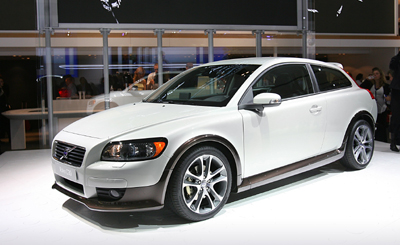 Professionals in their 30s will be a key target group, and Volvo has set a conservative target of 6,000 sales for 2007.

John Wallace, Volvo Car UK’s corporate sales and leasing manager, said: ‘The early signs from leasing companies are that residuals will be very strong and this will mean highly competitive contract hire rates against the Audi A3 and BMW 1-series.

‘Launching three diesel engines is a clear corporate decision as, whatever their budget, there is a C30 to suit drivers’ needs.’

MITSUBISHI took the wraps off its new-for-2007 Shogun off-roader range at Paris.

Visually, the main change is the new-look front end with sharper headlight shapes and grille, while inside is a new dashboard with upgraded materials.

On sale in the UK from March next year, the new look Shogun marks the 25th anniversary of the model’s launch.

Also on show was the new Outlander – an SUV which goes on sale next year to rival the Toyota RAV4 and Nissan X-trail.

The Outlander uses a new platform which will be shared with DaimlerChrysler and will form the basis of a host of new models to be launched within the next two years.