Was this article useful?
Click the thumbs up >
A POOR performance in April has prompted the Society of Motor Manufacturers and Traders (SMMT) to revise its forecast for car sales in 2006 down by 25,000 units.

The organisation originally thought this year would see 2.375 million new cars sold in Britain, but with April’s new car market down by 9.1%, it has now reduced this figure.

Christopher Macgowan, chief executive of the SMMT, said: ‘March was a better than expected new car market, which has not followed through into April.

‘Consumer confidence has suffered across all sectors of the economy in recent months.’

In the fleet market, Ford maintained its position as the best-selling manufacturer, although with sales down 1.8% year-to-date to 72,578.

Of the rest of the top 10 manufacturers, Peugeot has shown strong growth, with sales up 26.8% year-to-date to 27,486 units. Key to its success has been huge rises in demand for the CC folding metal roof convertible versions of the 206 and 307 ranges, both up by more than 100% year-to-date.

Alex Smith, commercial director at Kia UK, said: ‘We are starting to see the benefits of a concerted effort to replicate our retail market success in the fleet arena.

‘We have always been positive that there is significant latent demand for Kia product among fleet customers and as we establish our channels to market we are beginning to relate this demand.

With the imminent launch of the all-new Magentis, Sorento facelift, Sedona and our new lower-medium sector hatchback we are looking forward to continuing this growth.’ 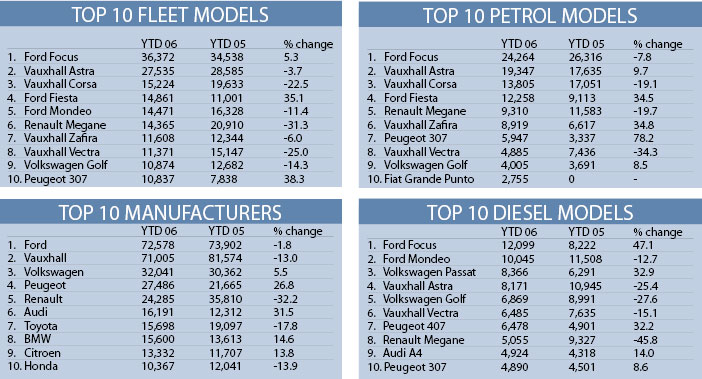