Was this article useful?
Click the thumbs up >
The phrase ‘one-stop-shop’ has become a bit of a hackneyed one of late – but back in 1995 when Ford launched a range of niche commercial vehicles under that moniker, it was a new and exciting concept.

Instead of expecting customers to buy base vans and kit them out themselves to particular fleet requirements, Ford decided to do the job itself and present ready-made vehicles for a variety of fleet purposes, all backed by a Ford warranty.

Of late, a lot of other manufacturers have copied this blueprint and Ford’s light has been somewhat hidden under a bushel.

Even Ford director, commercial vehicles, Steve Kimber, admitted to us: “We haven’t really been selling the depth of our range of late.”

Now things are about to change with the addition of two new models to the One-Stop-Shop range – a Transit three-way tipper and a curtainsider.

One-Stop-Shop began in 1995 with a rather curious-looking Transit Flareside, which sold in great numbers despite its bizarre looks.

The new single and double-cab three-way tippers are available in both front and rear wheel drive with a choice of three engines – all 2.4-litres, offering 100bhp, 115bhp and 140bhp.

The curtainsider can be ordered either in long-wheelbase or extended wheelbase formats, with load lengths of up to four metres and load volumes of up to 17.7 cubic metres. 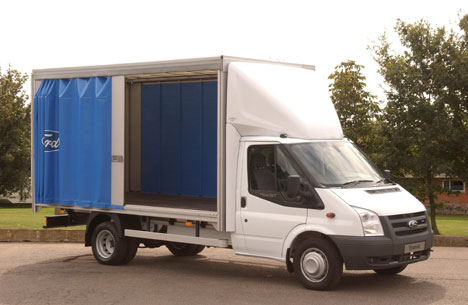 Engine variants are the same as with the three-way tipper and prices go from £22,400.

Mr Kimber pointed out that Ford’s range was different from that offered by other manufacturers because the adaptations were designed and built to Ford’s specifications and were unique to Ford.

He said: “ These vans are sold as a single invoice Ford product and not a dual invoice dealer/converter product.”