Was this article useful?
Click the thumbs up >
BMW may have shot itself in the foot slightly with its new 3 Series Convertible.

The car’s folding metal roof is so good that it almost negates the need for the recently-launched 3 Series Coupe.

At the touch of a button (and 22 seconds later) it transforms from a four-seater convertible into a cosy coupe thanks to the three-piece metal roof.

With the hard top in place it’s as quiet and refined as the Coupe, but with the top down you can experience the sunshine and, more importantly, the silky soundtrack from the straight-six engines offered under the bonnet. 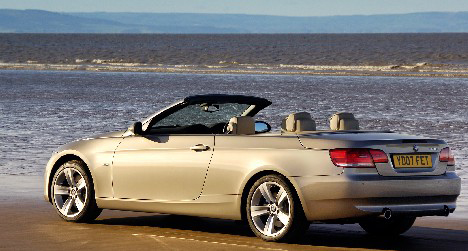 They replace the existing cloth-topped Convertible which sold 41,000 units in the UK between its launch in 2000 and its run-out stage earlier this year.

BMW expects to sell 5,800 models during the remainder of this year and the firm already has an order bank which makes up 40% of this total.

Just two trim levels will be available, SE and M Sport – the latter accounting for 80% of sales in the previous model. BMW expects this to continue over, with buyers opting for the more sporty looking car.

In its previous incarnation the Convertible didn’t make much of an impression in the corporate market (the fleet mix just about reached double digits percentage-wise) thanks to its fabric roof and the security implications which went with it. Now, with a hard top roof in place, BMW sees a greater opportunity in the fleet market and estimates more than a quarter of sales will go to company car drivers.

What they will get is a car which costs around 10% more than the old model, but which comes with extra equipment as standard – most obviously the metal roof, bi-Xenon headlights and LED taillights. With the roof in place the car lets much more light into the cabin thanks to an increased glass area, while weight is up by just 55kg – impressive given the weight of the new roof over the fabric item. With the roof down, there is 50 litres less luggage space than before, although with the roof up this figure is reversed.

BMW is also claiming a number of firsts in the convertible sector, with options such as a folding rear seat back to create more luggage space and the SunReflective seats which use a special leather impregnated with pigments to reduce the heat of the seats when they’re exposed to direct sunlight. BMW claims this technology can reduce the surface temperature of the seats by up to 20 degrees Centigrade.

ONLY two models were available to test at the launch – the 325i and the 335i.

First up was the 335i powered by a twin-turbocharged 3.0-litre straight-six petrol engine delivering 306bhp. Mated to a six-speed manual transmission, this provides storming performance and a glorious soundtrack as the engine nears the red line. The gearbox action is short and precise and makes this Convertible feel as much of a driver’s car as the Coupe and saloon variants.

The performance on offer from the 325i with a six-speed automatic gearbox is not on a par with its big brother at 218bhp, but it still gives enough go to match the looks and sporting pretensions of the model.

The ride and handling are unaffected by the engineering involved in accommodating the roof and its myriad motors, and with rear-wheel drive and near-50/50 weight distribution, this car maintains that edge which separates the 3 Series in all its guises from its rivals.

With the roof in place you might as well be driving a coupe thanks to the well-insulated roof and tight shut lines, while with the roof down and the optional wind deflector in place you can enjoy the climate without having the wind roaring around your head.

THE 3 Series Convertible, along with the crop of other CC models, does a great job of combining two cars in one.

However, BMW’s engineering expertise sets this model apart as it rides, handles and performs just like the regular Coupe. Only the slightly awkward look with the roof in place could possible deter a Coupe buyer from opting for one.