Government steps in to order 'continuous' training for at-work drivers 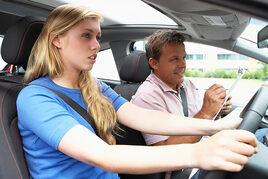 The Department for Transport (DfT) is preparing a new road safety strategy that will require all at-work drivers to undertake a sustained programme of continuous driver training, as well as proactively pushing local councils to introduce 20mph zones in all residential areas.

This new strategy, which will be published in two years, will outline what the police, local authorities and Government will do to reduce road crash statistics.

It will define how we will all drive in the future.

There are already clear indications of Government thinking – the road safety minister Jim Fitzpatrick has stressed that the DfT has at-work drivers, who are involved in 16 fatal crashes every week, firmly in its sights.

The current 10-year road safety strategy ends in less then two years and was criticised for not setting tough enough targets.

Now the minister is looking to introduce a new strategy in an attempt to put the UK back at the number one position as the country with the best road safety record.

“We are now working on road safety policies for beyond 2010, over the coming months we intend to consult on these proposals,” he said.

One of the examples of best practice the minister is exploring is that of Sweden, which has adopted a ‘vision zero’ approach to road deaths.

“The long-term goal is that no-one shall be killed or seriously injured within the Swedish road transport system,” explained Roger Johansson.

It is a vision that has already proved successful.

In the 1950s, Swedish drivers were killing at least 150 of their children annually.

Since then, through a zero tolerance approach, that figure is below 10.

Mr Johansson explained that responsibility for every child’s safety is placed with adults such as parents, schools, road and city engineers, and not just the child.

“Now when a child is killed, it is a national catastrophe.”

Compare that to the current situation in the UK and one can appreciate why this country is so far down the league in terms of protecting its children.

The number of children under 16 killed on Britain's roads rose by 20% in 2006 (the last year that figures are available for).

During that year, 169 children aged under 16 were killed on the roads.

In an attempt to reduce that figure, the minister is keen to see the roll out of 20mph zones in all residential areas.

“As a robust general rule, an average of a 1mph reduction in speed can be expected to cut crash frequency by 5%,” said the minister at the recent Brake Speed Conference 2008.

“We could reduce crashes still further with the help of more 20mph zones, especially in residential areas.

However, while many English and Welsh local authorities continue to be criticised for failing to introduce 20mph zones in residential areas and around schools, the Scottish legislature is racing ahead with plans to cut and then enforce speed limits in such high-risk areas.

However, while English and Welsh local authorities have the power to introduce such zones, many are failing to do so citing the need for increased finances to complete such schemes.

But it is only a matter of time before the example of Portsmouth, which hasjust completed introducing 20mph zones in all residential areas,  is replicated throughout the country.