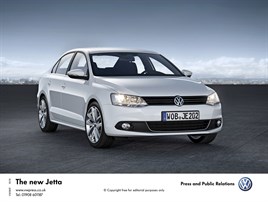 Volkswagen unveiled the all new Jetta this week, confidently declaring that it will “usher in a new era for saloons”.

Its success in the US is unrivalled compared to its European competitors, selling 110,000 models every year.

However in the UK, it has always lived in the shadow of the Golf and failed to capture the imagination of the fleet sector or the retail market.

But the German manufacturer believes this latest incarnation will carry over its success from the US to Europe, including the UK fleet sector, when it goes on sale early next year.

“We have completely retuned the technology and the styling of the Jetta,” said Professor Dr Martin Winterkorn, chairman of the board of management at Volkswagen AG.

“That is why our number one selling car in America will also be extending its position in Europe from now on.”

The S-trim 1.6-litre TDI version with BlueMotion technology is expected to account for around 28% of sales in the UK and Volkswagen says the retail/fleet sales split will be 45:55, with diesel models making up the majority of sales, at around 88%.

However, whether company car drivers will be swayed by what is undoubtedly an impressive car, Volkswagen will have to wait and see.

BlueMotion modifications, including start/stop and battery regeneration, will help and will be made available with the 1.2-litre TSI and 1.6-litre TDI engines.

That allows the 1.2-litre TSI version to achieve 53.2mpg on the combined cycle, while emitting 123g/km.

However, fleets will be interested in the 1.6-litre TDI variant, which returns 68mpg and emits just 109g/km of CO2, as well as a petrol hybrid version that could be unveiled towards the end of 2011.