UK drivers among the safest in Europe 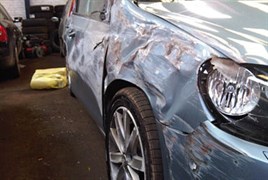 Drivers in the UK are the third safest drivers in Europe, according to a new poll by Goodyear Dunlop.

Germans were voted the safest. 18% of the 3,500 drivers surveyed chose Germany when asked to nominate the country with the safest drivers in the EU, Sweden followed with 9% of the vote, and the UK came third with 6%.

The Germans and the British are also the most likely to nominate their own drivers as the safest in the EU (22% and 20%, respectively).

The UK drivers polled were more likely to require further knowledge about tyres and their role in road safety of any EU drivers surveyed. For example, seven in ten UK respondents (71%) said they would have trouble telling one type of tyre from another without assistance, 62% aren't sure whether the tyres on their car are summer, winter or another type of tyre, and 42% know little or nothing about how different tyres can increase or decrease your grip on the road. However, the British are not alone - 75 per cent of all respondents said they would like to know more about tyres and their role in road safety.

Despite a number of specific differences depending on the country, the survey also showed some surprising consistency across Europe. After not drinking and driving, having correct tyres on the car came out as a key factor of road safety in every country, with 82% of respondents stating that 'having tyres in good condition and properly inflated' was 'very important' to their safety when driving.

Unfortunately, stating that tyres are important doesn't necessarily mean that drivers have crucial knowledge about tyres. Or that they put this knowledge into practice. The survey results suggest that many drivers underestimate the link between tyre choice and road safety: one respondent in three admitted knowing 'little or nothing' of the way tyres will influence their stopping distance or impact their grip on the road. Only 39% said they were 'very likely' to find out which tyres have the best grip in winter conditions, 29% said the same for summer conditions. One in three EU drivers confirmed they change every year to winter tyres when it's appropriate to do, but even of those who drive in cold, snow and ice conditions and claim to be aware of the importance of winter tyres, one in five admit they never switch.

That's for tyre choice, how about tyre maintenance? 73% of EU respondents claim to know the appropriate tyre pressure for different driving conditions, but almost half of the people surveyed didn't know when exactly to check tyre pressure (when the tyres are cold). And while 59% of respondents stated they regularly checked their tyre pressure, half of them admitted they might set out on a long journey without doing so. Similarly, 52% say they regularly check their tyres tread depth, but three in ten of them can't even remember the last time they did. Moreover, more than one respondent in three admitted they continue to drive as normal on worn tyres, which tyre experts consider a major safety risk.

"This survey on tyres & road safety reveals some of the worrying driving practices we all need to address to make our roads safer places," said Tom Delforge, Director of Communications EMEA at Goodyear Dunlop. "It also shows a number of road safety risks that can be addressed by promoting the right tyre choice, building more awareness and encouraging better maintenance. At Goodyear Dunlop we believe that the right tyre for the right conditions in combination with the right driving behaviour can lead to a safer journey. Our survey shows three quarters of drivers would appreciate knowing more about tyres and their role in road safety, and we intend to accelerate our efforts to support this learning curve, together with all stakeholders".

3,500 drivers were surveyed across Belgium, France, Germany, Italy, Poland, Spain and the UK.

* The study was carried out by APCO Insight on behalf of "Goodyear Dunlop Europe" to better understand licensed drivers' road safety awareness, beliefs and practices.

* A total of 3,500 European drivers were surveyed, 500 each for Belgium, France, Germany, Italy, Poland, Spain and the UK.

* Interviews were conducted online in the local language of each country. Nationally representative quotas were set on gender and age.

* Respondents had to: Have a valid driver's license, be older than 18, and be an active driver (drive more than 1km per year).

* Goodyear has 111 years' worth of experience in developing a vital part of any vehicle - the tyre. We believe that we have a responsibility be involved in the tyre safety debate, and we want to contribute to safer mobility.

* Goodyear Dunlop is a signatory to The European Road Safety Charter (ERSC).

* Goodyear Dunlop supported the idea of an EU Tyre Label that makes it easier for consumers to judge tyre performance from an environmental and safety perspective.

* Goodyear Dunlop has supported the mandatory introduction of the Tyre Pressure Monitoring System - an electronic system designed to monitor the air pressure inside a tyre - in all new passenger cars from 2012, and all cars from 2014.

* Goodyear Dunlop is engaging with stakeholders to demonstrate the importance of road safety.

* Goodyear Dunlop commissioned the Goodyear Road Safety Survey 2010, in order to raise awareness of the importance of basic tyre maintenance.