Upgrades for the Mazda 3 announced 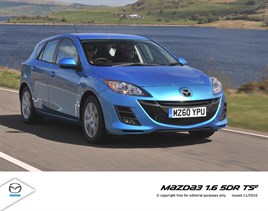 Mazda is giving its popular lower medium sector car a New Year boost with power, emission and fuel economy improvements to the 1.6 diesel model that are expected to further boost fleet sales.

From January 2011, the updated model will be available with a Euro5 compliant engine, which is now mated to a new six-speed manual transmission and also comes with a 12 percent hike in torque to 270Nm at 1750rpm.

Available as a five-door hatchback in TS and TS2 trim levels, CO2 emissions have been cut from 119g/km to 117g/km meaning all models remain in the 13 percent company car tax bracket. Combined cycle MPG is improved from 62.8 to 64.2. The TS2 five-door is anticipated to be the most popular model.

“Having a sub 120g/km car in the range delivering low benefit-in-kind tax bills, strong residual values and first class fuel economy has been crucial to building Mazda3 demand. With the improvements as a result of the imminent launch of the Euro5-compliant version I am confident that demand will increase further, particularly among user-choosers and employees who are opting for increasingly popular salary sacrifice schemes.”

To check out the latest Mazda car reviews, come to the Fleet News car reviews section.