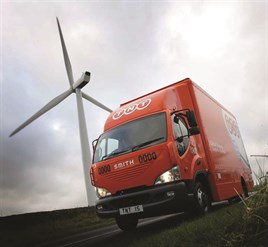 The $15-million sale will be effective from January 1, 2011, with Smith UK’s current owner, the Tanfield Group, retaining 49% equity in Smith Electric Vehicles US. This percentage is subject to dilution as Smith raises additional equity capital.

“This sale signals a bright future for the electric commercial vehicle industry,” said Bryan Hansel, CEO of Smith Electric US. “Being in a position to unify Smith’s divisions after less than two years of operating in the United States is evidence that the market for affordable, sustainable commercial fleets is fertile.

"The unification of Smith Electric Vehicles will create operational efficiencies and market synergies that will make Smith more financially sound and productive.”

Smith UK has been a leading manufacturer of zero-emissions battery-electric commercial vehicles in Europe since the 1920s. It operates a UK-wide service and support network that already maintains more than 5,000 vehicles for major fleet operators.

In 2009, Smith Electric US licensed the technology from the Tanfield Group and began to introduce the Smith Newton to the United States. Smith Electric US is now a privately-held company owned by Private Investors, Tanfield, and Management, headquartered in Kansas City, Missouri. The consolidation enhances a possible public offering of its equity securities in the United States.

The Smith Newton is the world’s largest electric delivery vehicle with a top speed of 55mph and 100 miles on a single charge. The Newton is powered exclusively by battery, runs without noise or vibration, and stores electric energy during stopping through a process called regenerative braking.

“The board of Tanfield believes that a consolidation of the Smith Electric Vehicles UK entity into our associate company, SEVUS, creating a single, larger U.S. based business, would be in the best interests of shareholders, particularly in light of the plans that SEVUS management have for the combined business post this transaction,” said Darren Kell, CEO of Tanfield.